How To: SAP HANA Authorization Tracing

This document will deal with issues regarding privileges & Authorizations with SAP HANA.

System privileges control general system activities. They are mainly used for administrative purposes, such as creating schemas, creating and changing users and roles, performing data backups, managing licenses, and so on.

Object privileges are used to allow access to and modification of database objects, such as tables and views. Depending on the object type, different actions can be authorized (for example, SELECT, CREATE ANY, ALTER, DROP, and so on).

In a multiple-container system, analytic privileges granted to users in a particular database authorize access to information models in that database only.

Package privileges are used to allow access to and the ability to work in packages in the repository of the SAP HANA database.

In a multiple-container system, package privileges granted to users in a particular database authorize access to and the ability to work in packages in the repository of that database only.

So, you are trying to access a view, a table or simply trying to add roles to users in HANA Studio and you are receiving errors such as:

These errors are just examples of  some the different authorization issues you can see in HANA Studio, and each one is pointing towards a missing analytical privilege.

So for example, we have a model in HANA Studio Schema and its called “_SYS_BIC:Overview/SAP_OVERVIEW”

We have a user, lets just say its the “SYSTEM” user, and when you query this view you get the error:

Error during Plan execution of model _SYS_BIC:Overview/SAP_OVERVIEW (-1), reason: user is not authorized.

So if you are a DBA, and you get a message from a team member informing you that they getting a authorisation issue in HANA Studio. What are you to do?

How are you supposed to know the User ID? And most importantly, how are you to find out what the missing analytical privilege is?

So this is the perfect opportunity to run an authorization trace through the means of the SQL console on HANA Studio.

So if you follow the below instructions it will walk you through executing the authorization trace:

1) Please run the following statement in the HANA database to set the DB  trace:

2) Reproduce the issue/execute the command again/

3) When the execution finishes please turn off the trace as follows in the Hana studio:

So now that you have turned the trace on and reproduced the issue, now you must turn off the trace.

So once you open the trace files, scroll to the end of the file and you should see something familiar to this:

So we can see from the trace file that User who is trying to query from the view is called TABLEAU. TABLEAU is also represented by the User ID (123456)

So by looking at the lines:

i Authorization    XmlAnalyticalPrivilegeFacade.cpp(01250) : UserId(123456) is missing analytic privileges in order to access _SYS_BIC:onep.MasterData.qn/AT_QMT(ObjectId(15,0,oid=78787)).

i Authorization    TRexApiSearch.cpp(20566) : TRexApiSearch::analyticalPrivilegesCheck(): User TABLEAU is not authorized on _SYS_BIC:onep.MasterData.qn/AT_QMT (787878) due to XML APs

We can clearly see that TABLEAU user is missing the correct analytical privileges to access the _SYS_BIC:onep.MasterData.qn/AT_QMT which is located on Object 78787.

So now we have to find out who owns the Object 78787. We can find out this information by querying the following:

Once you have found out the owner for this object, you can get the owner to Grant the TABLEAU user the necessary privileges to query the object.

This has since changed in the new revision of SP12, see here.

Changes as of SP12

I created a SP12 system and did a quick test to show what changes have been made.

So by the following the same procedure as listed above, I create a user called TEST. This TEST user is a stock user with little or no privileges assigned to it. 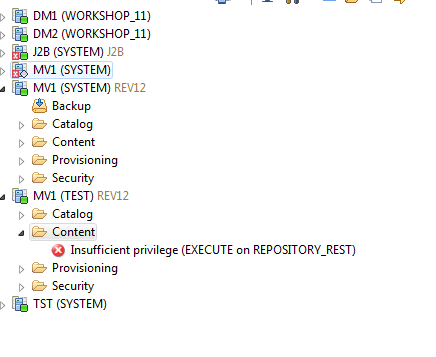 Having turned on the authorization trace as shown above, you can see in the indexserver trace:

The new feature in SP12 clearly shows you that the user TEST is missing the EXECUTE privilege for the PROCEDURE/FUNCTION SYS.REPOSITORY_REST. This eliminates the process of querying the oid number and finding the objects and the owners .

Please be aware that if you find that the owner of an object is _SYS_REPO, this is not as straight forward as logging in as _SYS_REPO as this is not possible because SYS_REPO is a technical database user used by the SAP HANA repository. The repository consists of packages that contain design time versions of various objects, such as attribute views, analytic views, calculation views, procedures, analytic privileges, and roles. _SYS_REPO is the owner of all objects in the repository, as well as their activated runtime versions.

You have to create a .hdbrole file which which gives the access ( Development type of role, giving select, execute, insert etc access) on this schema. You then assign this role to the user who is trying to access the object.

You have received an export of database objects, imported them and are now trying to access them with a SQL query. Even though you have ensured that you have assigned all the right privileges for the schema and the objects, selects keep failing with the following error:

In this case it’s worth to look for phrase STRUCTURED PRIVILEGE CHECK in the create.sql files, remove it and re-import the export.

This view can be accessed only using the filter on USERNAME as per this example:

SELECT * FROM EFFECTIVE_PRIVILGES WHERE USER_NAME= <username>

To view what AP’s are assigned to a specific user account, you can use the below SQL:

If the user is granted multiple AP’s, the definition of individual AP’s can be examined using the following SQL:

For more useful information on Privileges can be seen in the following KBA’s:

For more useful Troubleshooting documentation you can visit:

Informative document , thanks for posting.

is there something planed for mds tracing when struggling eg with Analysis for Office auth issues? That would be cool 🙂

Yes sure, I will get in touch with you.

I have taken out the DEBUG command as I have seen people trying to use this to find solutions but DEBUG shouldn't be used, only use INFO when using authorization.

Is it possible to enable authroization trace for multi tenant environment.

Yes, just execute the SQL in the tenant you are seeing the auth error in….its the same principal?.

great article. Many Thanks