I had left a comment a while back on Tammy Powlas great document here: Forecasting Using Time Series Analysis – SAP Predictive Expert Analytics.

I thought I would use one spare hour to “drink my own champagne” and give it a try on the same example with Automated Analytics.

I collected the data at the exact same source – from the Bureau of Transportation Statistics (http://www.rita.dot.gov/bts/acts) and I downloaded US domestic passenger data by year/month from January 1996 to June 2015.

I open SAP Predictive Analytics and jump to the Modeler/Time series section. 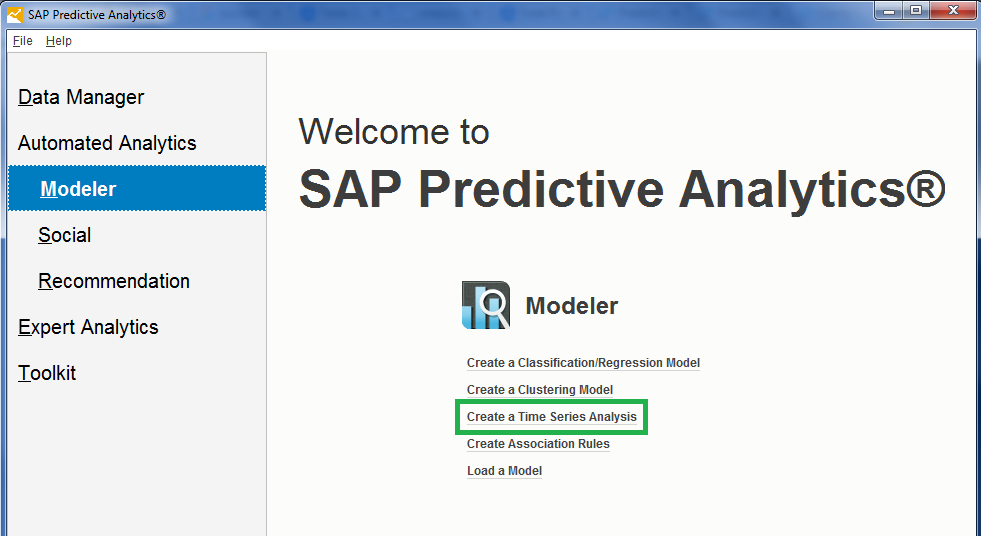 First I load my very simple .csv file and specify the date format. 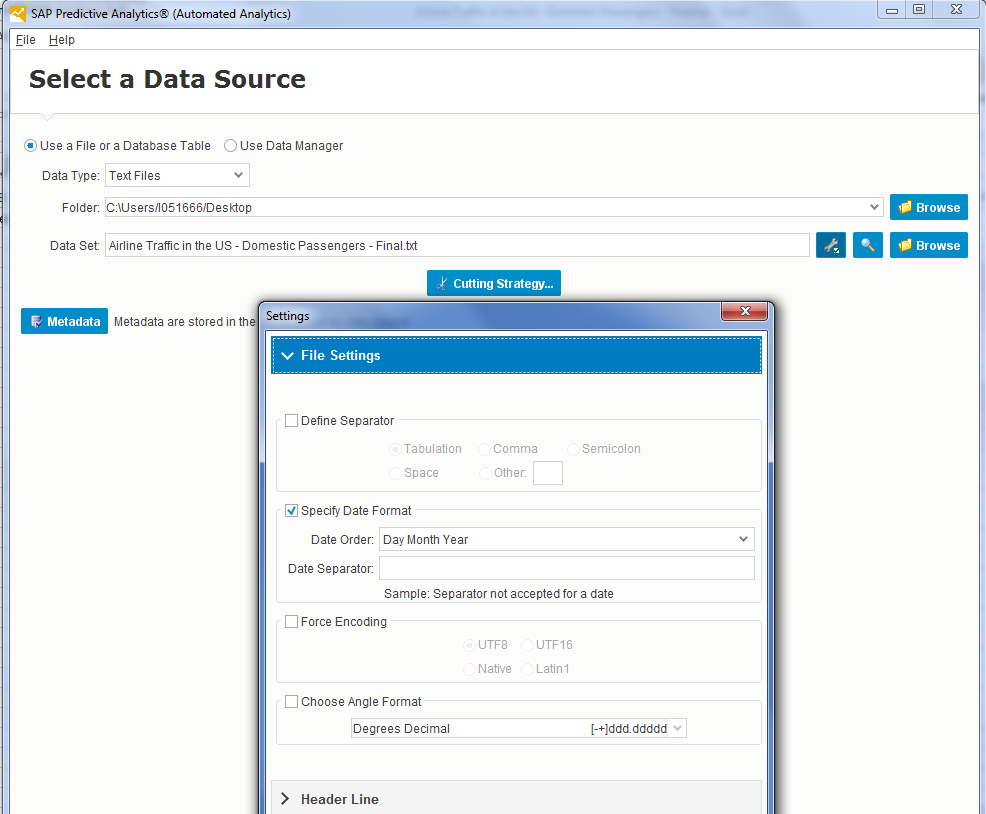 I need to tell the software that my date column gives the order of the data set (Order =1 for Month variable).

I can give a quick look to the data – number of passenger enplanements by month. 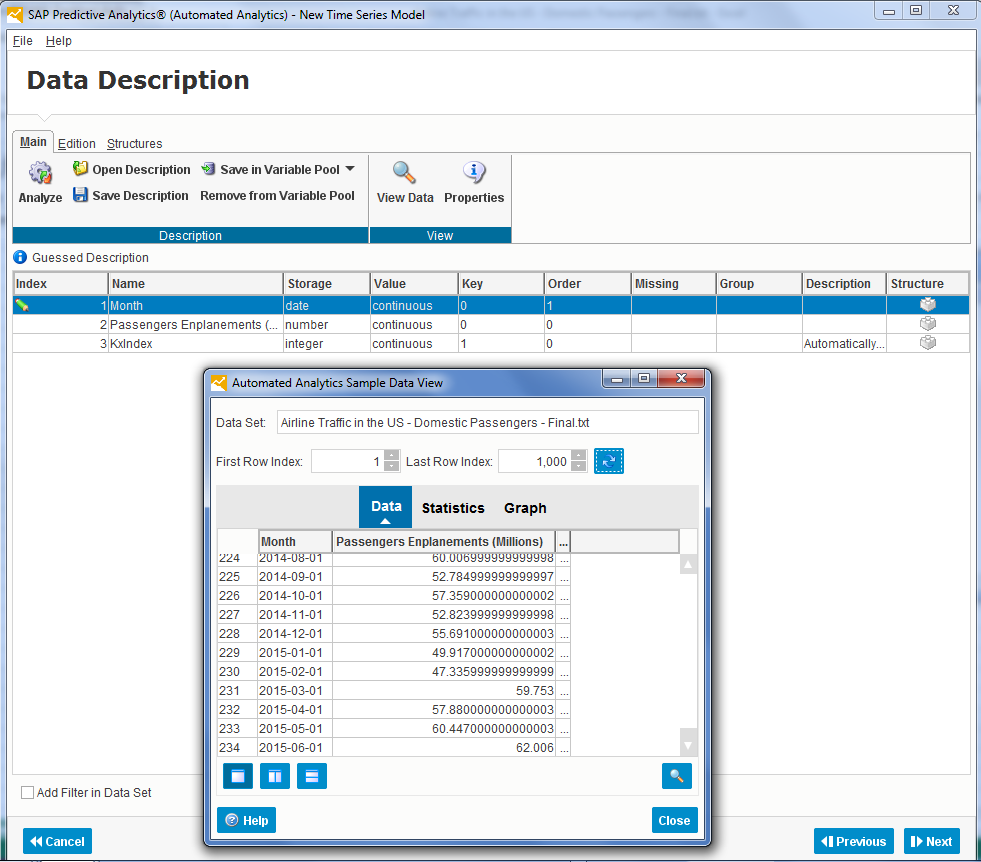 I set my two variables: 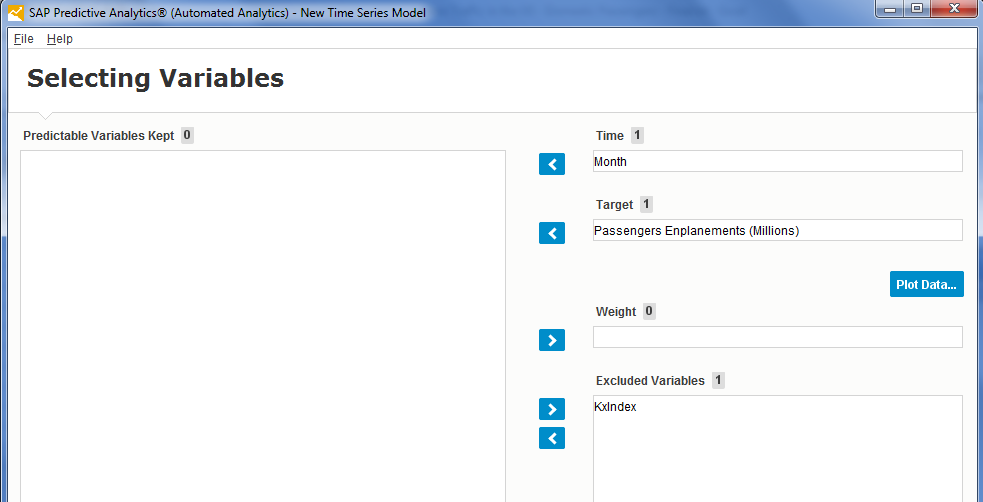 I will generate my model and ask for 30 forecasts to get the predictions until December 2017. 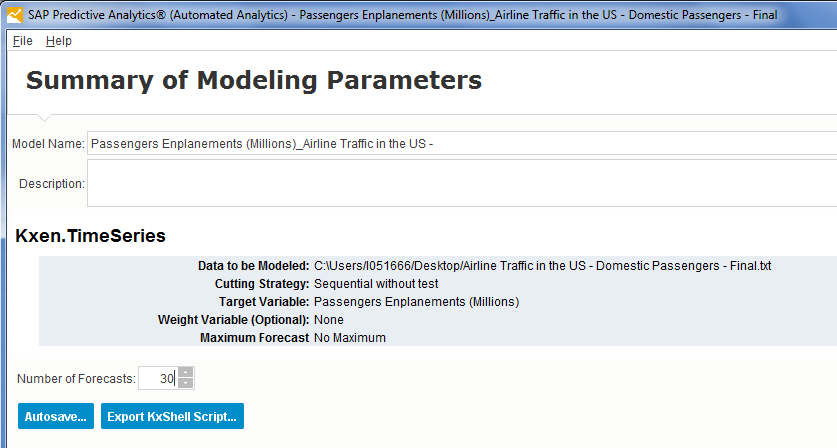 The performance of the model is very good.

The model has a polynomial trend and cycles based on the month of the year.

As Tammy explained, there is more traffic in the summer months due to the summer vacations.

I can see the signal in the View Signal Components window. Real figures appear in green. The ones that are forecasted by my model appear in blue.

We see that we have an outlier here (red rectangle), the model does not really understand what happened in September 2001 (while we do understand and remember).

The rest of the signal is pretty well modeled, although we visually spot some differences in the years 2004 to 2009 with real traffic being higher to the modeled values. Is this due to higher pre-crisis airline traffic?

We can visually get the uncertainty around the 2015 to 2017 forecasts.

We could certainly further improve the accuracy and reliability forecast taking into account more variables beyond the sole date. This is a core capability that is provided by the time series algorithm of Automated Analytics. 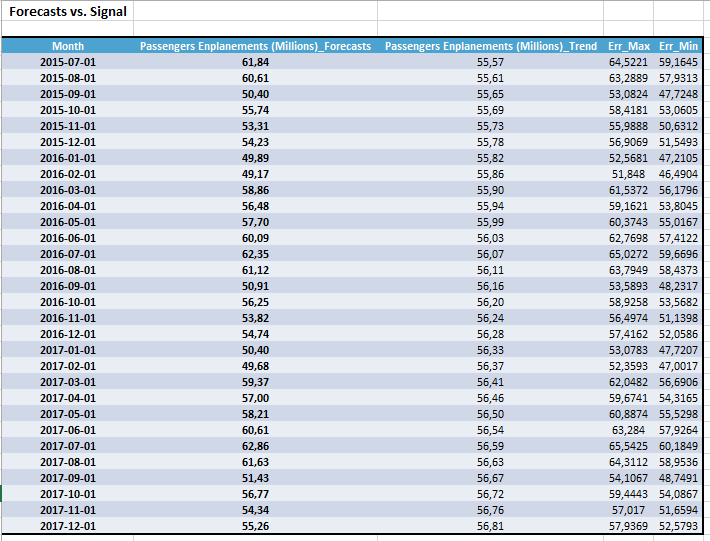 Thanks for reading the document, I hope you enjoyed it!

Credits are due to Tammy Powlas for the original document idea.

I will be happy to share the data set with anyone interested by this example. You can also download it directly from the link at the beginning of this article.

Chicken! You could compare the results of the two techniques 🙂 .

I think that this post should be complemented by another one that includes extra predictor variables that can handleld automatically by Automated (as you rightly pointed out) such as the average gas price, why not airline traffic as you suggested, or any other US indicator we can find out (number of cars sold, etc...)

Economical or energy-related factors in particular sounds like nice tracks to follow for adding extra-predictor variables and further improving the accuracy of the forecasts.