In this blog, I will briefly explain the differences between the two kinds of delta transmission supported by EC Compound Employee API.

Two different kind of delta transmission are supported Compound Employee AP, these are:

Effective dated delta transmission is designed for consumers that work in an effective dated manner, where consumers store the time frame (start and end date) when a data record is effective. Deltas are only communicated for entities, which have been created, changed or deleted since the last replication, independently whether these are retroactive or future-dated changes.

The query response of the API contains in both cases action codes as a clear indication for each element on how to process the data on consumer side. Additionally, changed attributes are obvious since the current and the previous value of the attribute are part of the query response.

Not-effective dated objects, like national IDs or email are returned in both kinds of delta transmission, if these are changed after the last replication. 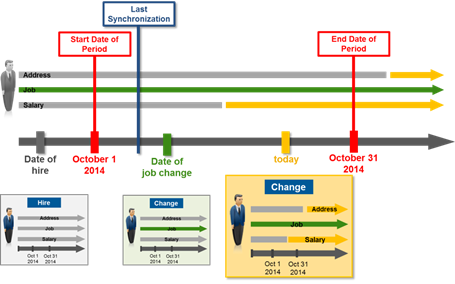 In effective dated delta transmission Compound Employee API returns all changes that happened since the last synchronization, i.e. the change of the job, the change of the salary and the future address change.

For a consumer using period-based delta transmission and providing October 1st to October 31st as synchronization period, only the change of the job and the change of the salary will be replicated, since these changes affect the given period and the data, which has already been replicated to the consumer in the past. However, the change of the address remains unconsidered and will first be transmitted in the next period of November, if it becomes effective.

Looking forward to your questions and feedback in the comments section.

can the images or photos be transmitted or fetched from SF using Compound API, I know it is possible to do through ODATA API.

no, it is not possible to extract images or photos using Compound Employee API.

We would want to know how the security architecture works in Compound API. Security Features that includes encryption, Single sign on , Role base permissions etc.

Kindly share few insights if you are aware on this section, I tried to find in devolpmer, implementation and security aspects is not so widely covered.