In this blog, we will see how CSS works for these components in SAP BusinessObjects Design Studio. We will also learn how to customize the color of these images and how to use these custom images in the components.

Understanding how CSS works in these components

SAP BusinessObjects Design Studio uses different images to differentiate and display the Check box / Radio Button selection. When a user selects an option in the check box or the radio button, the image used by the component changes to the image corresponding to the selected option. Depending on the theme used for your application, either the image will be replaced by another or the position of the image will be changed.

1. On themes such as Platinum, Gold Reflection or Blue Crystal, a single image is used and based on the user selection; the background-position property is used to move this image around to indicate selection & deselection – similar to CSS image Sprites.

2. On themes such as Mobile & Mobile Black, two separate images are used, one of which is to indicate ‘selected’ and another is to indicate ‘deselected’. In this case, the image itself will be changed based on the user selection.

In the Mobile theme, when a Radio Button is disabled, the opacity of image used is reduced by 50% in CSS.

Note: CSS Class name may varies between DS 1.4 and DS 1.5 for some themes.

Refer to Table 2 for the components which use two images and their corresponding CSS Class names.

Note: High Contrast black theme uses no image, so the above procedure does not apply for Radio button and Check box components on this theme.

1. Edit the Images as per your requirements

Use image editing tools of your choice or the websites mentioned in the previous blog to edit the colour of these images as per your requirements. There are a couple of points that you need to look out for:

2. Convert the image to URI

Once you have the images edited, the next step would be to convert them to a URI so that you can reference them within a custom CSS file.

Use Online image URI Converters like http://websemantics.co.uk/online_tools/image_to_data_uri_convertor/ to convert your edited images to URIs.

You can also refer to this blog to learn how effectively URIs can be used.

Since, in our example, I have used the “Mobile” theme, I will only need to modify the following CSS Class with our custom images:

In my application, I have tried to change the blue Radio Button to red. I inserted the respective Image URIs for deselection and selection indication in the above CSS code. For your reference, I have also shared the CSS file that I have used: Click here to download the CSS file. After uploading this custom CSS file to my SAP BusinessObjects Design Studio application, the customized radio button appeared as in the figure below.

Please note that when you use a theme with single image, you may have to modify just one class to ensure that the component’s styling changes. Refer to Tables 1 and 2 for CSS classes.

The general structure of the CSS files is as shown below:

a. Format of CSS file if components use one image

b. Format of  CSS file if the components use two images

To learn how to modify a component using CSS, you can refer to this link – http://scn.sap.com/docs/DOC-41398.

Once the CSS file is uploaded, the components will be modified as per the CSS with the modified image and we are done!

Have fun customizing these markers in SAP BusinessObjects Design Studio.!!!

Your post is really great one!!!. But in my case, i wanted to reduce the button size as per the requirement though its only working for deselected values(refer pic1). Please see the second pic and let me know if i missed anything on css coding. appreciates your response. thanks 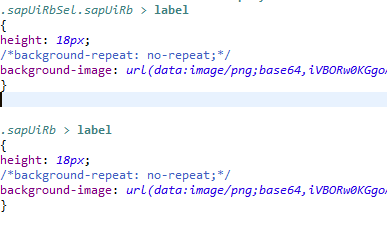 Sorry for the late response.

Button ( markers) are just images as i mentioned above in blog, first you need to resize the image with some image converter to 18px and use it as URI.

Actually you haven't missed anything, you did great. But, please remember to convert the images also.

Please find my below script with image size converted to 18 pixels and assign "small" as CSS Class to radio-button.

Note : Added "small" as a custom class to show you can even use radio buttons with different size and formats in a single dashboard. ( please remove ".small" in front of class if you feel confusing and also don't assign any class to radio button). 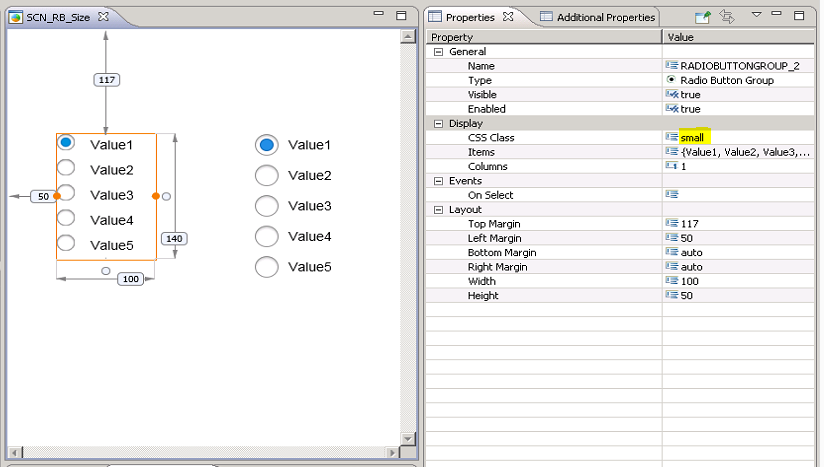 Thank you very much ganesh. Your help was very much appreciated. Its working now 🙂