SAP is a large company, so it’s common for teams within SAP to apply for awards without my knowledge. It was a genuine surprise, however, when I learned we had received one of the design world’s most prestigious awards: The Red Dot.

In case you are unfamiliar with the Red Dot Award, it is an incredibly competitive international recognition of design excellence. There were 4,680 entries from 61 countries this year. SAP was not only among the less than 6 percent of applicants to receive a Red Dot Award, we did so in one of the most competitive disciplines: Design Concept. The Red Dot Design Award places SAP in the company of such design giants as Apple, Ferrari, Bang + Olufson, Mercedes, Grohe, Bose, Whirlpool, BMW and a handful of others. While not the first design award SAP has received, the Red Dot is the most well known and prestigious. It marks the utmost significant recognition of how far we have come.

The conceptual design of SAP Fiori 2.0, our next-generation user experience, is what garnered us this distinct honor. A small team within SAP in Germany operated in an almost stealth mode until the Fiori 2.0 concept was presented internally and to a few of our customers. It was positively received, so we showed it to more customers, and excitement started to grow. We are now in the process of rolling out the Fiori 2.0 concept for SAP S/4HANA as well as other solutions. 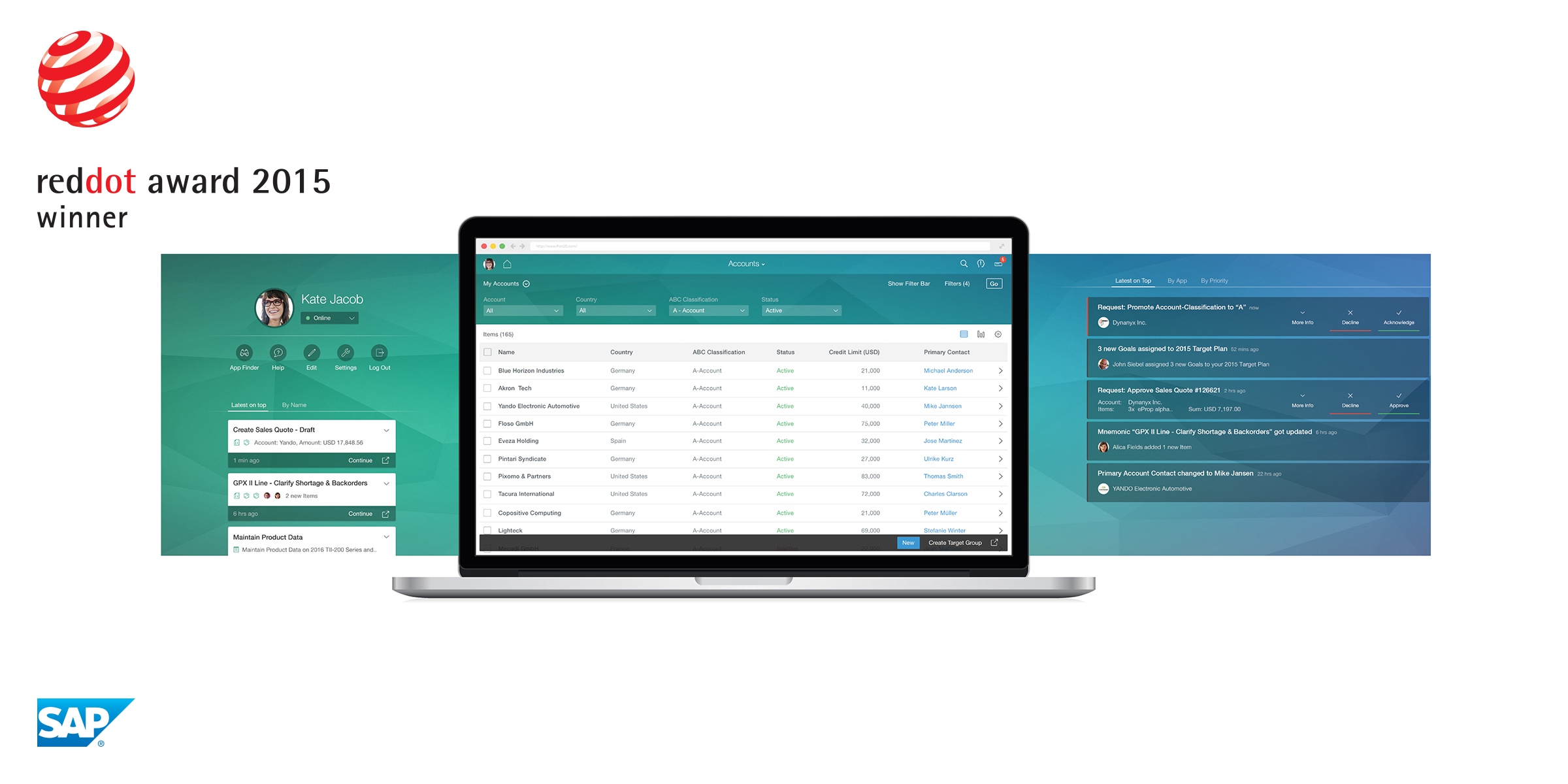 We didn’t get here overnight. The path to the Red Dot started a little over ten years ago, in 2004. That’s when we first started adopting design thinking with the full support of SAP Chairman Hasso Plattner. We moved from a company focused on functions and features to one focused on customers. We started to create new products with the end user at the center of the process. Then, as users started to expect their enterprise software experience to resemble their mobile phone apps, we spun up a start-up environment outside of SAP, called the AppHaus. It gave teams a chance to rapidly develop consumer applications and test them in the marketplace. That work fueled what eventually became SAP Fiori, starting with 25 of the most broadly used apps, based on designs born in the AppHaus.

You don’t flip a switch and change an organization. In the case of SAP, it has taken over a decade to get to this point. Organizations need to bring in the right people with the right backgrounds. They have to introduce new artifacts and change their processes and space.  The hardest thing to change, however, is the organization’s mindset and culture. That takes time, but as this big win shows, it’s time worth spending.

Throughout this entire journey, my secret has always been to go outside of the organization. Go to the people you are selling your solution to, get their buy-in and use their energy and excitement (or even their anger) to drive change within your organization. If you let the customer speak for you, you’ll win.

Learn more about the Red Dot Award and get the inside scoop on design at SAP.

Competing against over 4,000 applicants and coming out as a winner? Incredible! Thanks for sharing and congratulations.

What a great design! When can we expect to use Fiori 2.0?