We are happy to announce the release of the latest version of the SDK for SMP and HCP Mobile Services, SMP SDK SP10.  The key highlights in this release are the following

We will have backward compatibility support for IOS9 in SMP 2.3 SP06 and SMP 3.0 SDK SP09 MBO Toolkit, the latest in-market SPs. Full support for MBO tool kit is planned for the next release.

We also have support for Windows 10 for both native and hybrid SDK . New windows 10 applications can be built using the Application builder. For more details on cordova support for windows 10 , please refer to the following link

We have also verified that the SMP SDK Android libraries are compatible with the Android M developer preview.

Agentry applications now run on iOS 9.0, with some exceptions. You cannot yet compile the Agentry OpenUI iOS SDK against the iOS 9 SDK using Xcode 7, so some iOS 9.0 features, such as multitasking split view and slideover, are not yet available for Agentry application

Additional hardware and software requirements for this SAP Mobile Platform SDK release are accessible through the Product Availability Matrix, but they are maintained in SAP Notes through the SAP Service Marketplace, which also requires a login.

We keep improving the developer experience of our SDK  . To this end these are some of the updates that were added in this release

Visual studio is one of the premier IDE’s for enterprise application development. With Visual Studio 2015 , Microsoft has extended the IDE to be the main tool for creating applications addressing Windows, Android, and iOS apps, as well as modern web applications and cloud services.

Developers using the SAP Mobile Platform SDK must perform the same technical tasks for every application before accessing back-end services and implementing the application’s business logic. These tasks include, but are not limited to:

A developer can streamline this process by using the SAP Business Application project template and associated wizard for Visual Studio to generate C# skeleton applications for various Windows runtimes that in turn:

Much waiting features included in the new release of the SDK. Thank you for keeping Developer Efficiency in view for SDK improvements.

Is there any alternative link to access the Github sample added in the blog. Github Sample iOS App  ?

At this time that is our distribution mechanism for sample code. It will enable us to keep it updated.

I mean to say the link is broken and not accessible.

Thanks for pointing it out . The link is fixed

SP10 is planned to be released to the service market place today . In case you cannot see it in the list , please wait till end of the day .

I have just integrated SP10 with my iOS project using Cocoapods, but I noticed SODataOfflineStore.h does not exist anymore. Has this been removed from SP10?

I just did a quick verification with SP10 pulled from Service Marketplace, and didn't see any issue.  Here is my Podfile, and the integrated project:  see SODataOfflineStore.h included in the ODataOffline folder under the Pods project. 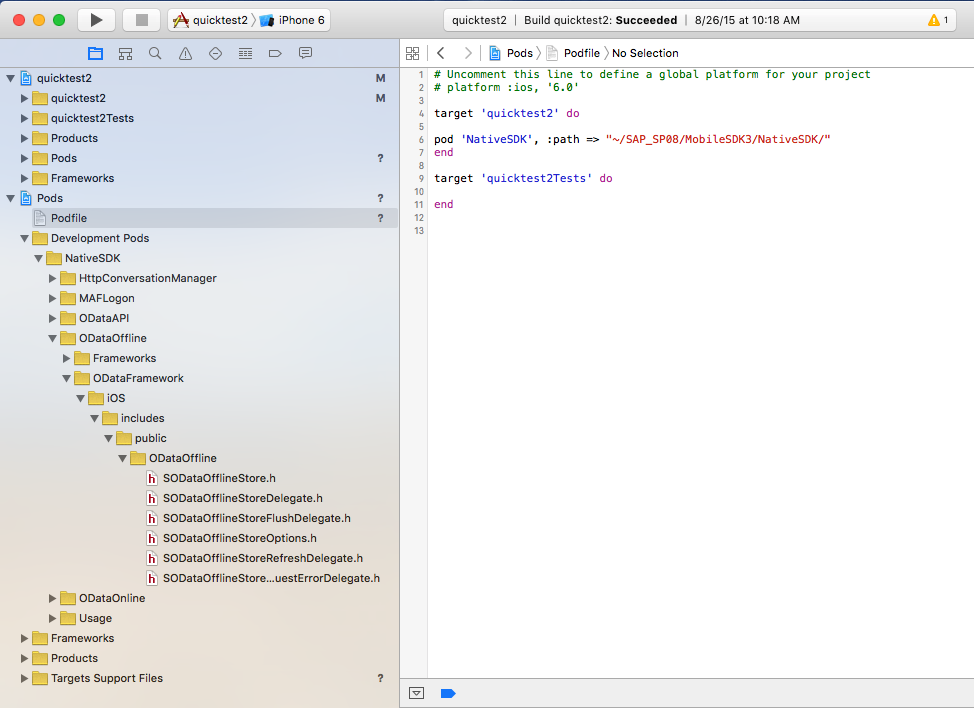 Is there a place I can go to download this version of the SMP SDK without an SID? I used to be here: https://store.sap.com/sap/cpa/ui/resources/store/html/SolutionDetails.html?pcntry=US&sap-language=EN&pid=0000013098 but no longer.

I got here from this article: Download and install Mobile SDK SP05. The title says it's about SP05, but actually when you get to downloading the trial SDK from SAP Store, it offers you SP09 and SP10.

The link for the GitHub is still broken.. https://github.wdf.sap.corp/MobileSDK/CRMODataApp

is not a valid webpage

I have tested it both from your url and from the original document url and have had not problems with accessing it.  I am testing from within the SAP network.  Can someone verify that Gregg's issue with access has to do with whether in SAP network or out?  I won't be able to for several hours.

Any update on this? Link remains unaccessible from my client (outside network)

The Cordova link works as it is a public site.  The Notes require a login to Service Market Place (as stated in the article) and the Github also requires authorized users.  If you try to access it without being signed on, then you get the error you identified.

You will need to have an authorized SAP ID to access them.  You might want to ask Kiran Karunakaran if he can provide a publicly available copy of the sample app, but he may not be authorized to provide it without an SAP ID.

Hi Kiran, is there an CRM-Example for Android, too?

As Kiran may not be able to respond to you on this, let me jump in and answer: The CRM example was created for iOS only, and currently an Android version of it is not on our roadmap.