Don’t Give Learned Helplessness a Chance

A paralyzing virus is lurking within many organizations, and it is solely responsible for countless failed transformations. It answers to the name “learned helplessness.”

Learned helplessness is not a hip term from yet another best-selling management book; it is a concrete and scientifically proven phenomenon in the behavior of both people and animals. It is a passive attitude in which “victims” believe they have no control over events that are happening to them. Luckily there are effective measures to tackle it.

Learned Helplessness in Animals
Scientists found the phenomenon first in animals. They were letting rats swim in a bowl with water that was sealed with a lid. The animals started panicking and learned that their attempts to escape were to no avail. When those same rats were put in a bowl of water without a lid, they did not even make an attempt to save their lives. They had erroneously learned that there was no point. This discovery is attributed to Martin Seligman, who conducted a similar experiment with dogs.

Talking about dogs. This clip is a nice illustration.

This remarkable phenomenon has also been observed in people, where it can stimulate depression, fear, shyness and even loneliness. A classic example is that of a child failing a test at school. The child may think he or she is dumb, which is not necessarily the case. But it can increase fear and stress for tests in the future, in which the child will probably give up. Learned helplessness in this clip is a ridiculous but relevant example.

Companies are vulnerable for learned helplessness. Especially the larger companies or companies with a business model that is disrupted. Learned Helplessness is easy to recognize: The moment you notice that someone is not giving an opinion openly and honestly, you may be dealing with learned helplessness. That person might refrain from constructive feedback because he or she doesn’t see the point of bringing it forward in the first place.

This attitude may spread like wildfire within an organization! People start complaining and pass on negative sentiments, which will make other groups helpless, creating a network of helpless teams that blame each other and cannot break the negative cycle on their own.

A new strategy will be required and you are not out of the danger zone, because culture eats strategy for breakfast.

The solution lies in the symbiosis between individual and collective. With learned helplessness, an individual is always opposing an environment in which he/she feels helpless. Organizations — or collectives — can implement the following improvements:

You are the best medicine against learned helplessness!

Every human has to make their own choices. We have the capacity to influence our outside world, to take matters into our own hands — being a subject instead of an object.

Think positive. Believe in yourself. There is nothing stopping you in making your own choices. Break out of your comfort zone! 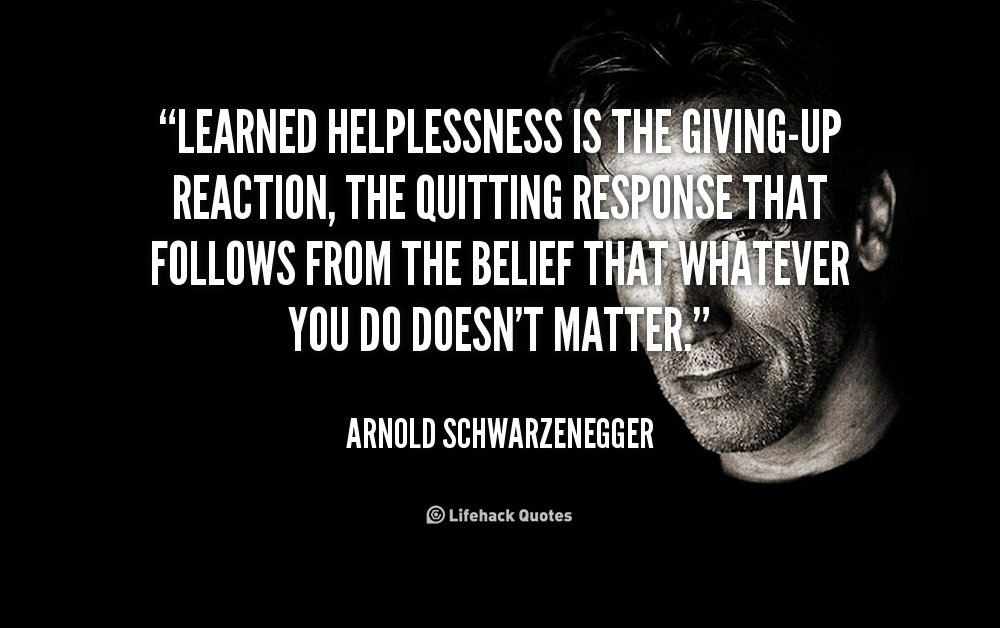