Location Analytics in Lumira : Bring Your Own Data

Location Analytics has started to gain prominence in the BI world. Across the globe, companies are now finally seeing the added value it brings, to such a degree that Gartner has added it to its Magic Quadrant. More than any other chart type, it has the power to give instant visual insights to anyone, simply because maps do speak to everyone.

Simply put, this is what Galigeo For Lumira is currently achieving. If you’ve not yet been introduced to Galigeo for Lumira, please consider reading this. It’ll get you up to speed in no time.

To add a little bit of context, lots of data scientists and BI analysts are already using Galigeo for Lumira to gain insights into their data, without necessarily having experience in geomapping (and in fact most of them do not). They have provided a lot of feedback on the product.

One of them was dealing with custom geodata inside Galigeo for Lumira. It is a great feature, but for some, just a little too « geeky » to master. Indeed, you have to have JSON notions, open and save a file manually and make sure there is no syntax error.

That taken into account, Galigeo for Lumira is back in a new version with a new tool that will leverage the possibility to add custom geodata and use it in Galigeo for Lumira, and remove any difficulties whether you’re an expert or not.

It’s a desktop tool that will visually allow any user to add and manage their custom geodata and use it in Galigeo for Lumira in just a few clicks. This blog post is intended to introduce the extension on one hand but also to act as a tutorial on the product :

In previous Galigeo for Lumira versions, one could already import their own geodata. It was a big plus, but to achieve it it was necessary to open a specific file inside well-nested folders, manually write a new entry using some kind of « geek-formatted » text, configure all the required fields manually, and finally make sure no syntax error was left before exiting the file. Pretty exhausting and arguably not very user-friendly. After all, Lumira has been designed to be simply used by everyone, hasn’t it?

With Galigeo Manager, everything is far more simple now.

Start by double clicking a .exe exactly like in Lumira and an interface shows up. 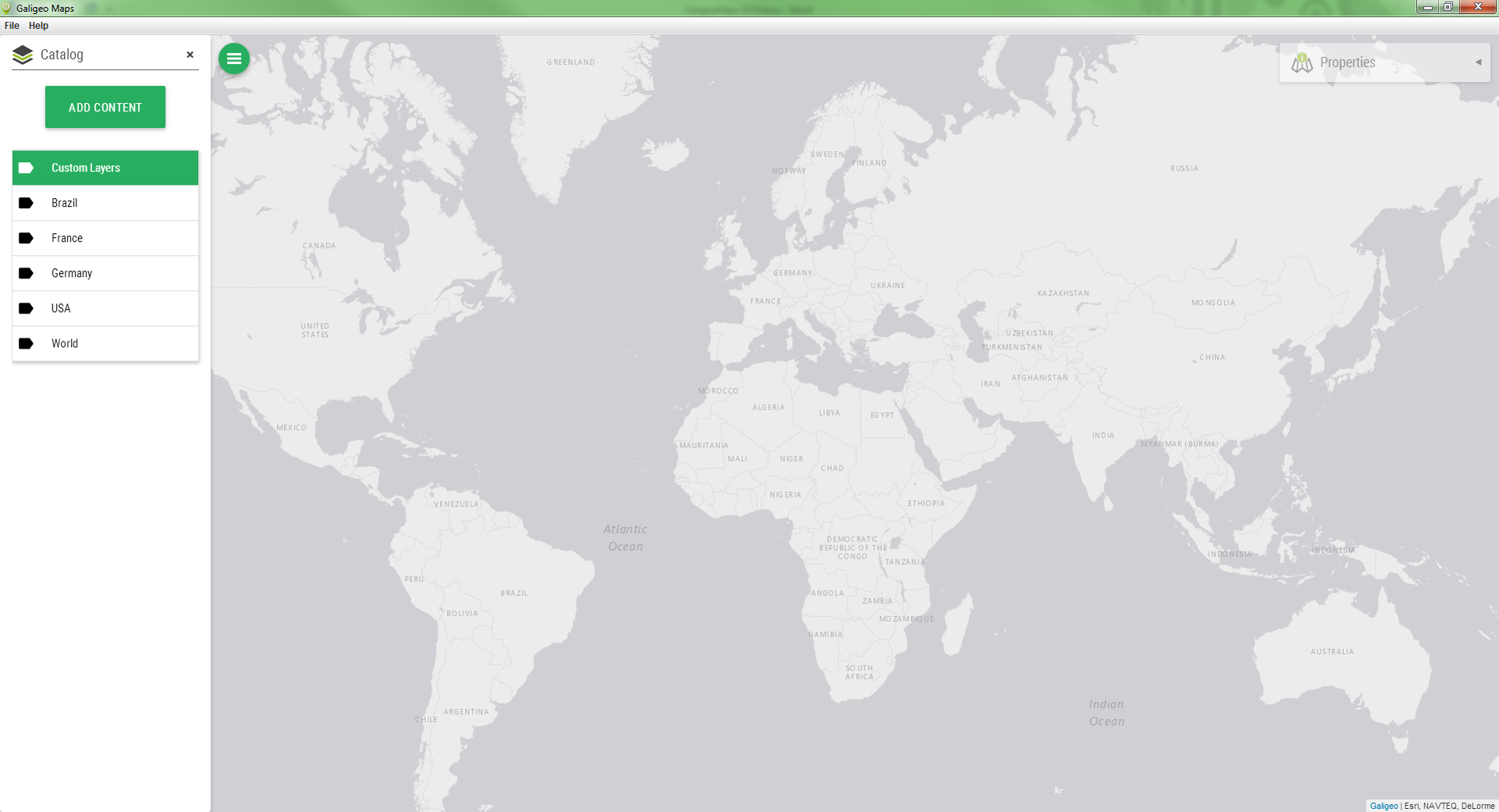 By default on the left panel, you can already see that there are pre-existing geodata. These geodata can be used in Galigeo for Lumira without any restriction.

For example, if you expand the USA category, and click on County Fips, you’ll see the map displaying all US counties. 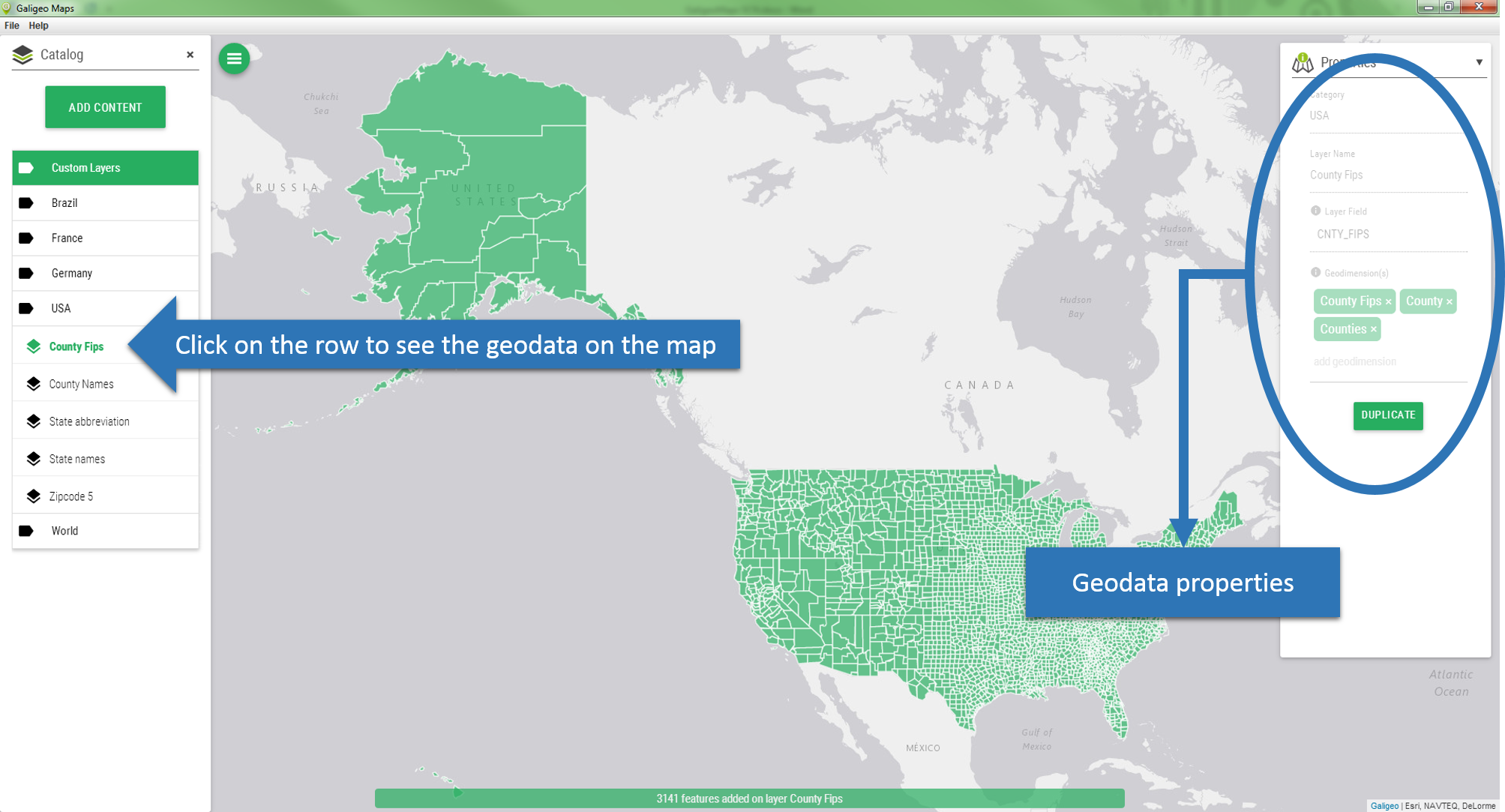 You could use default geodata with your BI data, but this article is about using your own geodata. So let’s see how to do this.

Let’s say, for example, I’m not really an expert in the geomapping world. I don’t own an ArcGIS Server for sure, I might not even know what an ArcGIS Server is… I have a bunch of data on Chinese Provinces, and I would like to see them on a map. But I don’t know where I could find these Chinese province boundaries.

One good website to get started is GADM. It allows you to quickly download several administrative boundaries of almost all countries in Shapefile format. I go there and choose China, then process the download. 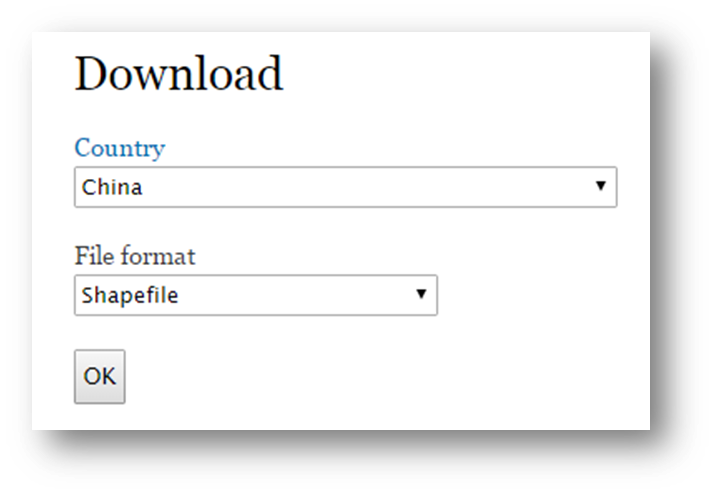 After the download has been completed, going back to Galigeo Manager, I click on file and navigate where I previously downloaded the shapefiles. In my case, there are four files that I can chose, all of them with a different administrative level. I pick the second level, hoping it will be Chinese Provinces (I could just find it through trial and error if it was not the case).

Once I’ve chosen it, I wait a few seconds for Galigeo Manager to load it, and I click OK.

My wish came true, I can now see the Chinese Provinces.

All the necessary content for Galigeo for Lumira has been loaded on the right panel, which can be seen as the property panel of the geodata I’ve just added. 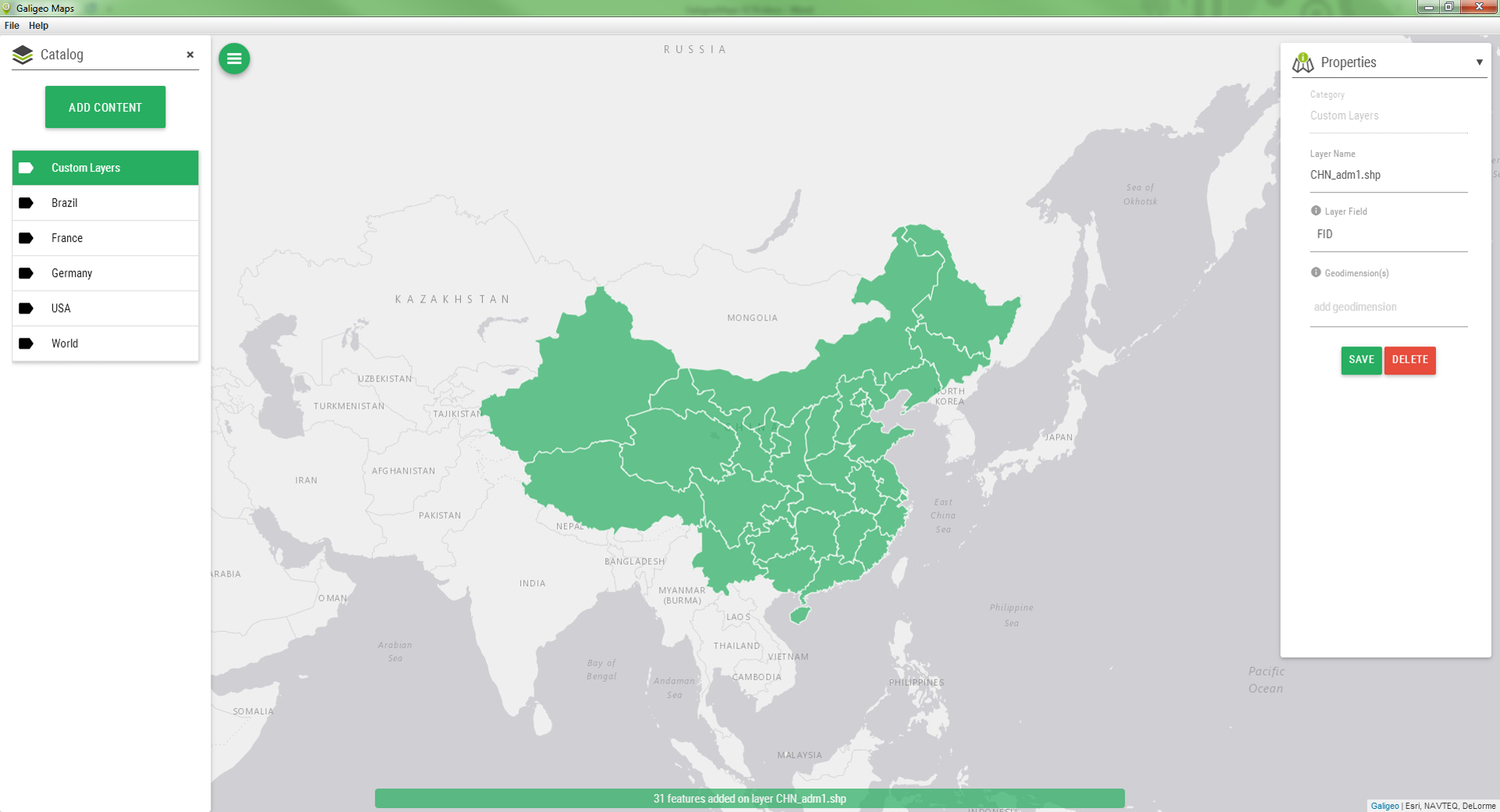 Right now, I’m going into the only (and small) configuration part. It’s not too long, don’t worry.

Looking into the property panel, I have three inputs.

You may be wondering, how can I define the Layer Field and the Geodimensions?

The Layer Name will create a link between the geodata and your BI data, right?

Let’s say, this is actually my BI data (of course this is just a sample, not real data) 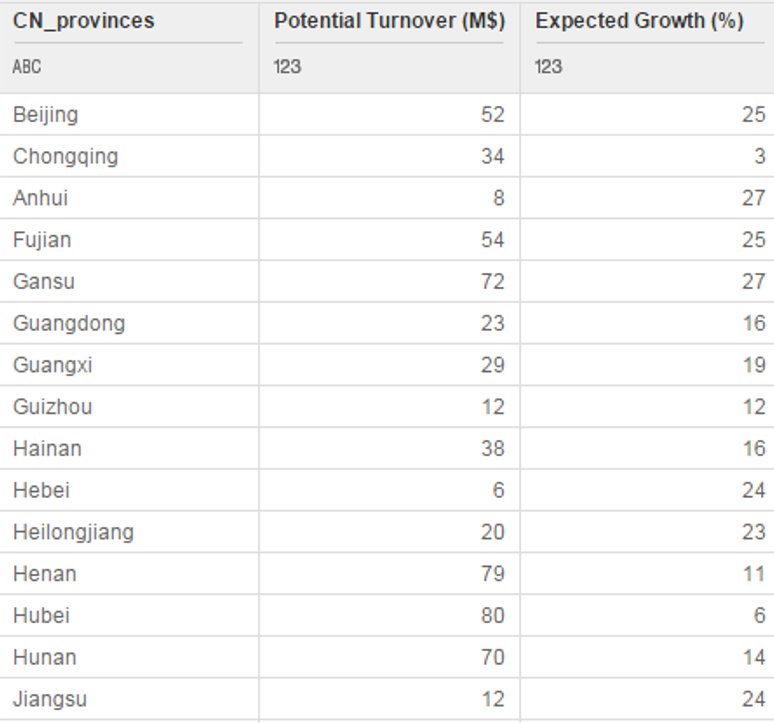 You will notice that I have the Chinese Province names in my CN_provinces dimension.

This could be helpful to create a link between the CN_provinces dimension of my BI data and the geodata I’ve just added.

In Galigeo Manager, you can click on of the feature on the map to display its properties in a popup. You can therefore determine which property (a.k.a Layer Field) you’ll have to use to create the link between your geodata and your BI data. 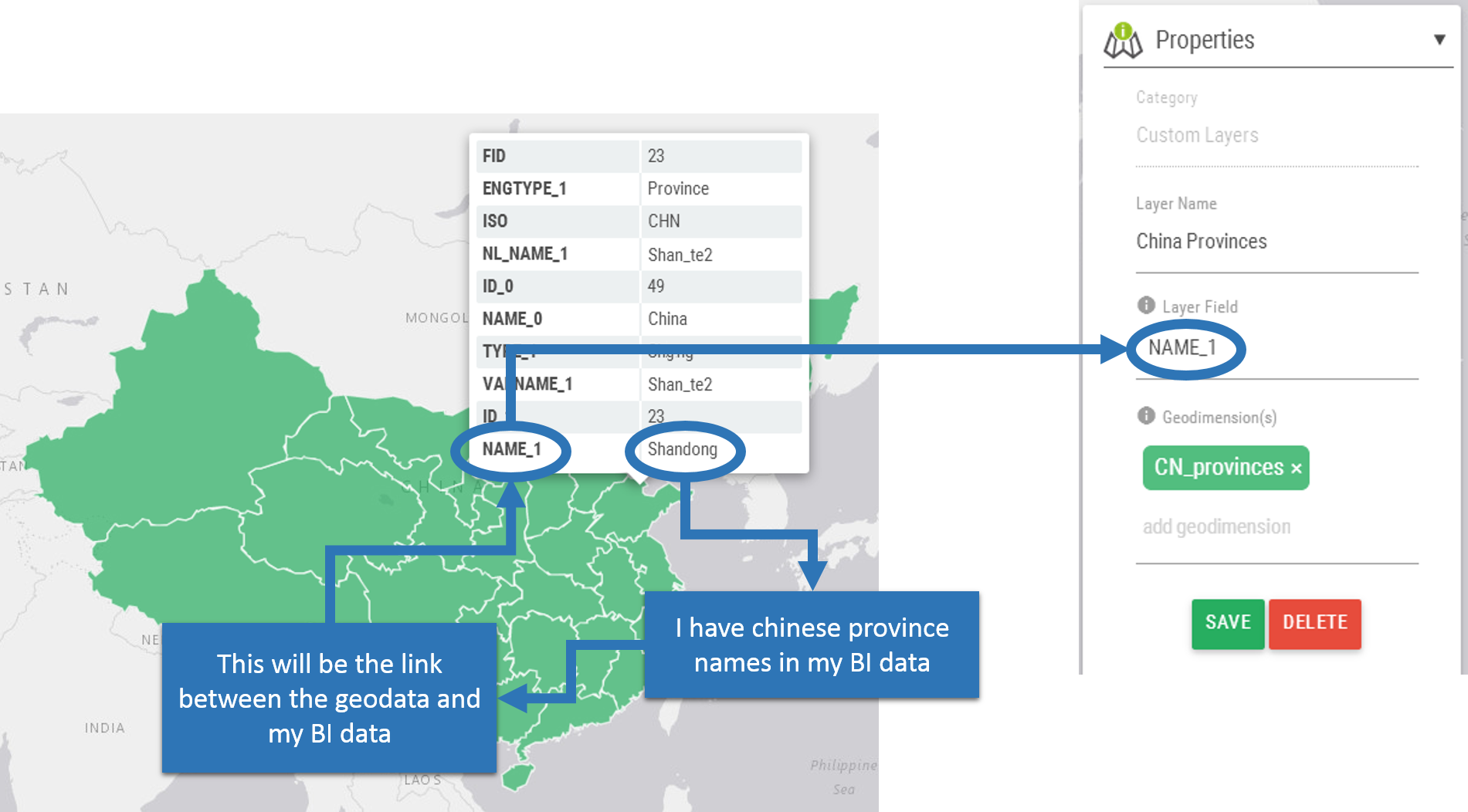 On the picture above, we see that the layer property called NAME_1 contains a Chinese Province name as a value. This will be our Layer Field.

Geodimensions are even simpler. Their main aim is to allow Galigeo for Lumira to smartly pick the right geodata according to your BI data. The best practice is to match your BI dimension name with a geodimension.

In our case, this picture sums it all up. 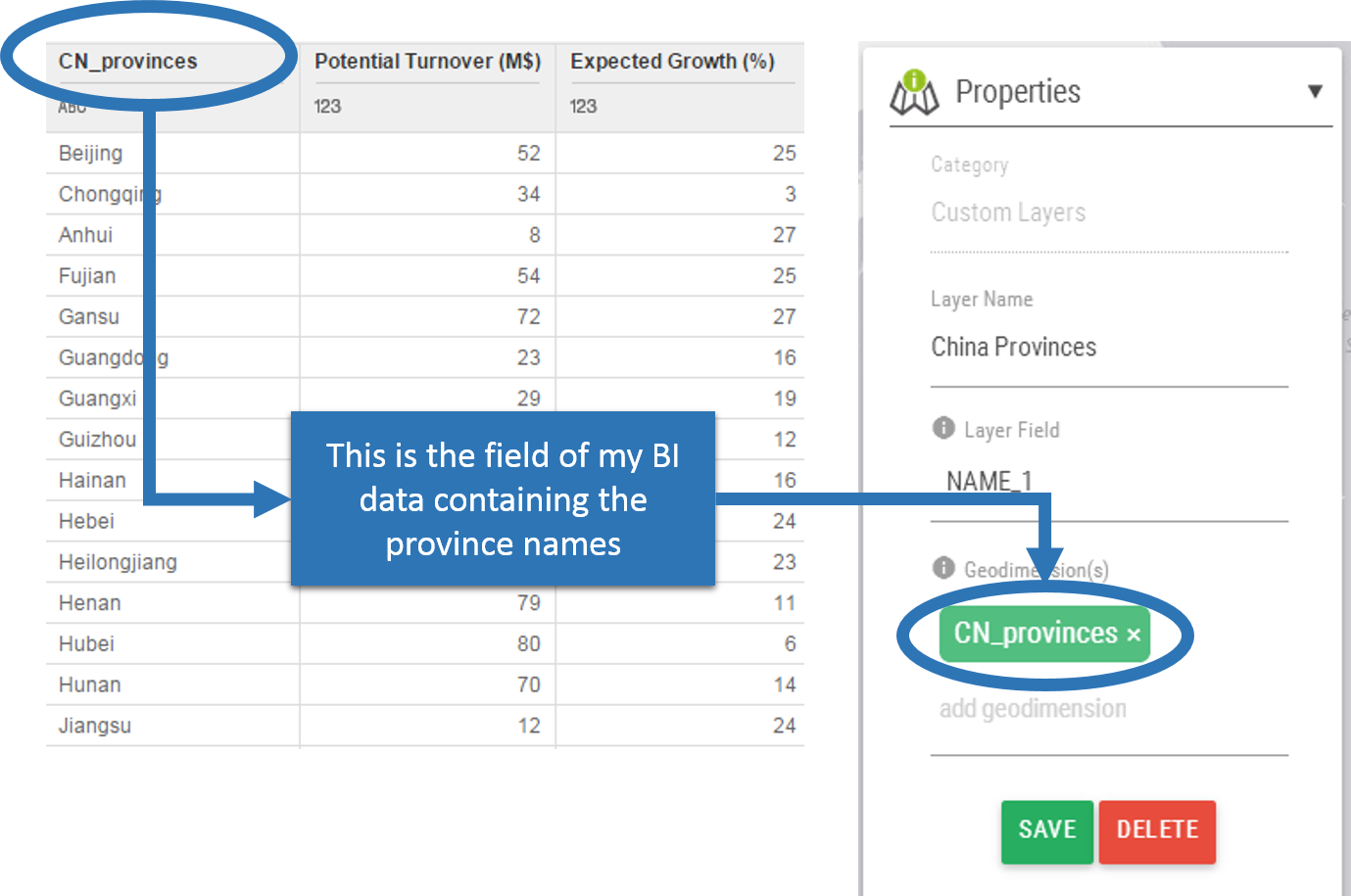 You can enter several geodimensions if you have several datasets with different BI dimensions names, all containing the similar values. For example, if I had another dataset where my Chinese Provinces names were contained in a BI dimension called China_Provinces, I would have to create a second geodimension called China Provinces, so I could have used both datasets with my geodata without having to modify anything.

Anyway, if you still feel a bit lost while using Galigeo Manager, just click on the help buttons to open an explanation of the feature. 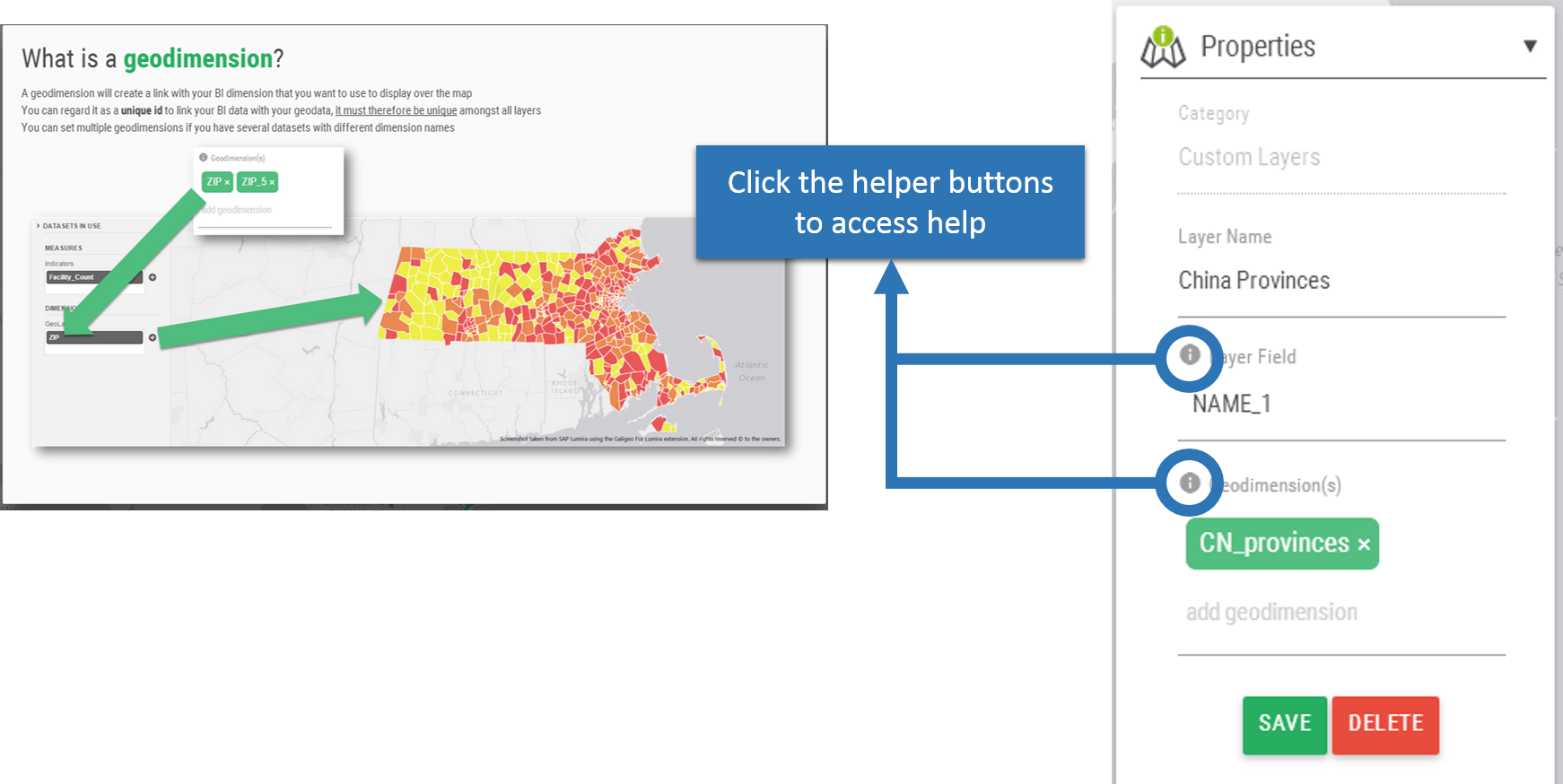 After the configuration is over, do not forget to click on the Save button at the bottom of the properties panel. You can of course save, then come back later onto the geodata to modify its properties, like adding a geodimension, without having to configure everything again.

We’re almost done. Now I just have to start Lumira, load my dataset and chose the Galigeo Map extension. I can now see my KPI on the Chinese Provinces.

For dimension, I – of course – used the BI dimension called CN_provinces that we saw earlier, so Galigeo for Lumira was able to pick the right geodata.

So, here we are. I hope you’ll appreciate this new tool that aims to bring simplicity to the Location Analytics world, or more globally in the BI world. SAP’s leitmotiv nowadays is Run Simple. Thanks to Galigeo Manager and Galigeo for Lumira, you’ll be able to « run simple » your BI.

As always, if you have any feedback/ideas/requests on the product, feel free to contact myself or Olivia Sedant via private message.

Also,  Galigeo for Lumira is available on SAP BI Platform.

When will Galigeo Maps be available for download and or trial?

The bundle [Galigeo for Lumira+Galigeo maps] will be available for Download (30 day trial) during October.

In the meantime, please, fill this form Galigeo for Lumira