Abolishing Slavery: the Second Wilberforce is all of us

William Wilberforce was one of the great reformers of the Enlightenment period and is credited with the passing of the Slave Trade Act on 25 March 1807. Not only was slavery banned throughout the British Empire, but the Royal Navy was given the task of hunting down slave ships in the seas it controlled (practically all of them). 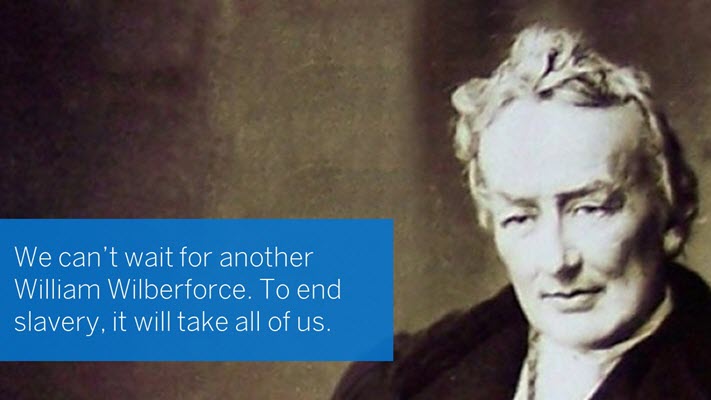 Slaves had been part of human societies since ancient times, and it was the first time that a significant attempt was made to stop it. But 200 years on, slavery has not been abolished: far from it. It just morphed into other forms, acquired new names and new victims. It may be called human trafficking, modern slavery or child labour.

And it isn’t just on plantations in the Caribbean any more. You can find slaves these days in a mine in Africa, in an electronics factory in Asia, picking fruit in California or in the *** trade in Europe.

According to Made In A Free World, slavery is when someone is

deceived or coerced into a situation they didn’t agree to for someone else’s profit.

And today over 35 million people live under these conditions. That’s more than in Wilberforce’s day.

Earlier this year, the British Parliament passed the Modern Slavery Act 2015. The Act is unique in that it has introduced into legislation an ambitious measure to encourage transparency in supply chains, which has international implications. No matter where it is head-quartered, if a company is doing business in the UK, the implications of The Act will reach throughout that company’s supply chain globally. If you want to see what this means, take a look at c.30 Part 6 Section 54 which details your company’s obligations.

So although Great Britain is again taking the lead, we can’t wait for all other countries to enact similar legislation. Especially as many of the countries with the worst records are not exactly democratic. But this doesn’t mean getting all counter-cultural or  anti-capitalist, the marketplace is too strong: the profit from modern slavery is estimated at a staggering $150Bn a year. Capitalism created this problem, and capitalism must be the one to fix it.

Purchasing managers at UK organizations are compelled to act. And Ariba can help.

We at Ariba have joined forces with Made In A Free World (MIAFW), the leading non-profit network of individuals, groups, and businesses working together to disrupt slavery. MIAFW has built the world’s first software that identifies the risks of forced labour in supply chains. Your organization can join our Pilot Program.

My daughters aren’t usually very interested in what I do at Ariba, but they are really interested in this initiative: it makes me proud to work at SAP. 200 years ago, plantation slavery was driven back by a man who was a Member of Parliament, Christian, wealthy, well-educated and well-connected. But this time round, we can’t wait for another Wilberforce. This time round it’s going to take all of us.