Oktoberfest in the Digital Era: Can you get too far ahead of customers? 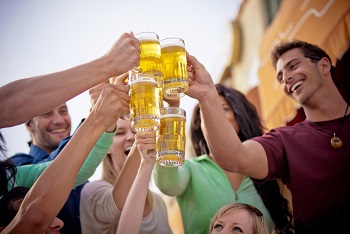 As Oktoberfest revels kick off in places far from the celebration’s origins in Germany, I started thinking about how modern supply chains have evolved to match the rites of every season, including beer aficionados. Thanks to advanced technology, companies now possess astoundingly powerful tools to get ahead of demand. I should also note that SAP’s customers produce more than 77% of the world’s beer.

Logically speaking, the most successful businesses operate at the exact intersection between supply and demand. But is it possible to get ahead of your market?  Here are a few companies challenging traditional trade (and taste) routes this beer-imbibing season.

I’m always intrigued by Amazon’s innovation-laden forays into products and services, and their latest doesn’t disappoint. Seattle beer, wine and spirits drinkers can receive their favorite libations from Amazon  — on-demand in just one hour. It’s the first-of-its-kind timed delivery service for booze so there’s no precedent. No doubt a number of industries will watch this one carefully to see how it develops.

In an exclusive partnership with a local craft brewery in Minneapolis, Wheaties has debuted HefeWheaties beer. It’s made with the same malted wheat that’s used to manufacture Hefeweizen brews, a German-style of wheat beer. It could give a whole new meaning to breakfast of champions. Is wholesale disruption on the menu for the first meal of the day?

California brewery 21st Amendment is jumping into the festivities with a decidedly American twist, releasing a beer inspired by Pop-Tarts. Apparently the flavor was inspired by the company’s new facility, which was previously home to a Kellogg’s factory. Can promotional tie-ins with America’s iconic breakfast pastry be far behind?

Closer to my hometown, Harpoon Brewery in Boston, Massachusetts, is literally transforming a legend, using purified water from the Charles River in its new Pale Ale. Immortalized in the classic hit, “Dirty Water,” the Charles River may just clean up nicely for beer fans.

Of course it’s impossible to say which innovations will make it big, including new routes to a beer drinker’s heart. No doubt the Charles River clean-up is commendable. There are surely many spontaneous people out there in search of instant (read: faster) delivery services for everything, including booze. And there’s no argument Pop-Tarts and Wheaties represent justifiably famous brands. Perhaps the lesson here is that aligning supply and demand requires breakthrough thinking customers are willing to get behind.