Real life examples & use cases for ABAP 740 and CDS views

It has been long time since I post my previous blog which draw more attention than I expected and I was thinking what could be next. Luckily I am working on a S4HANA project and having opportunity to try new syntax options and I will compile some real life examples and test samples about new syntax options and CDS views and try to explain why and how they are useful and we should try to use them.

First of all it is possible to get information about all of them in ABAP keyword documentation in Release specific changes as shown below. There are many changes, in my blog I will only briefly mention the ones that I had opportunity to use.

Some of the examples was only created to see what can be done, as they may not fully fit to a business case. I only code in ABAP for a long time and I can say it is really nice to avoid necessity of going top of the block just to define something so using inline declarations is really practical and time saving.

It is again time saving have better readability and helps us to have shorter source codes, no need to say there can be countless different usage options.

Above statements is directly from ABAP keyword documentation which will allow us to build more complex join statements, we can now use only restriction from another left side table and we can use fields from left side table in where condition which is quite revolutionary and it is possible to build one big select statement which means some reports can now only built using one select statement by also help of other changes (using literals, case and more) that can be seen in keyword documentation.  I did verify it and coded some reports in both logic and compared the results it is simpler to code and faster in HANA Here comes the example.

Also restriction to use only equality comparison on “On condition” is removed for outer joins. 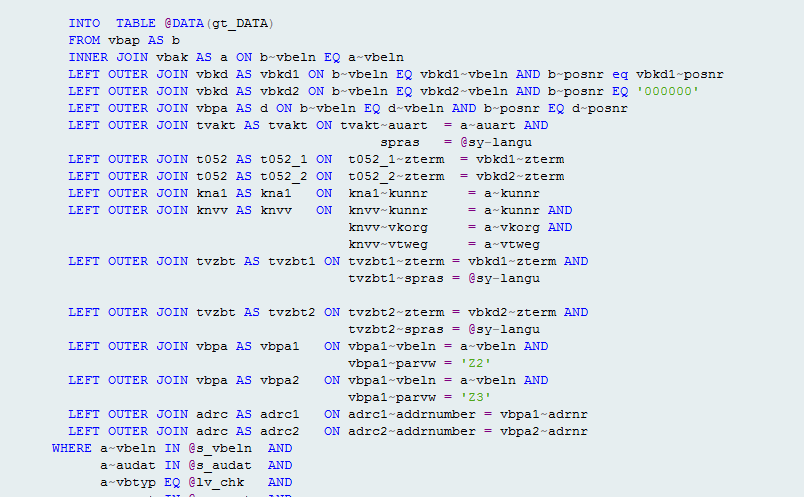 Where condition also contains fields from left side tables:

4.  Source codes  that can only be edited in Eclipse( ADT )

This one is not a syntax option but it is something that we need to know so I wanted to add this to my list. Eclipse is in place for a long time but so far we were able to edit every development object in Eclipse or in SAP GUI (Correct me if I am wrong ) but it is changed, now there are CDS ciews and AMDP (Abap Managed Database Procedures) that can only be edited in Eclipse. So if for any reason you need to develop these objects you also need to have Eclipse in your PC and it may be nice to start coding in Eclipse if you have not started yet.

Message if we try to edit AMDP in GUI: 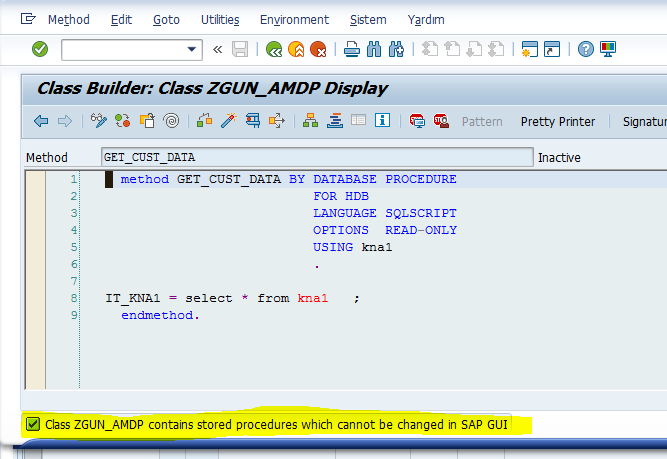 After HANA we had different tools like Analytical and Calculation views and external view, database procedure proxies to read these views directly from ABAP but there are some practical difficulties to use them if most of the development tasks in a project is handled by ABAP programmers (learning SQL script, granting project team members authorization in DB level and having different level of transport management which can easily cause problems), CDS views can be a good alternative they are at least managed in application layer and have same transport  procedure as older abap development objects.

We keep searching use cases for the CDS’s  in our project. We so far created master data views and tried to create some reusable CDS views which can be used by several reports can be seen below.

We also tried to convert some old logic ( Select data from different tables and merge them inside loops) into CDS’s its performance is better but could not test with some really big data yet but I also need to mention it is at the same level of performance with a big select shown in Open SQL explained in point 3 .

Example view on material data, it can be used in select statements in ABAP or viewed in SE16 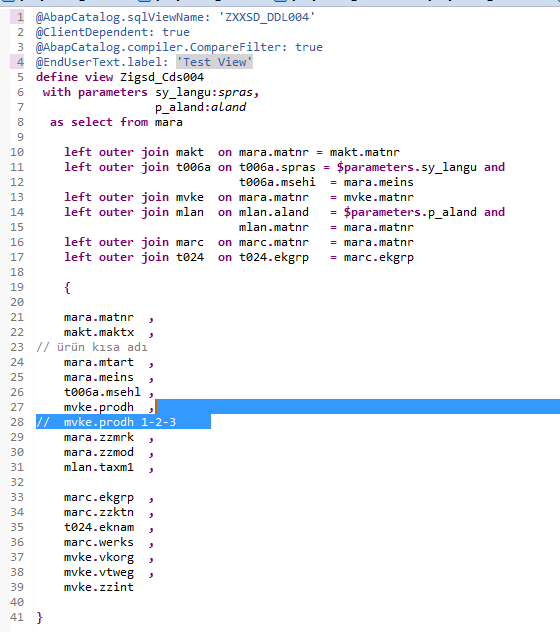 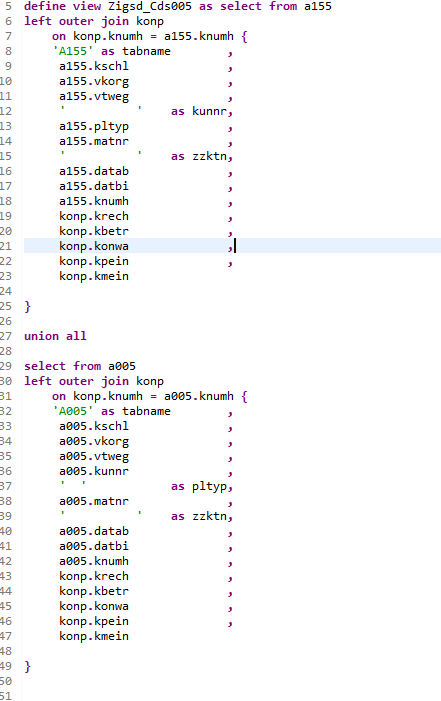 Result for the view

There are many other changes to explore for some it may take long time to have  a proper case to apply, would be happy to know if you also used some new syntax changes and how they made life easier for you.

What i don't like having Inline declarations is that they are still valid after their declaration. In your example with the loop i would be happy if the field symbol is no longer valid after the corresponding endloop.

As we are upgrading our system right now I'm still thinking about how to handle this in our development guidelines. Currently I tend to forbid them.

It can be problematic if it is written directly in a program, but inside a modularization blog it will be a local definition and won't be available globally so if modularization blocks are small it would not be a problem in my opinion.

Than you will have a discussion with the developers all the time: what is small and what is not small?

Code inspector can be configured in the way to check line count of each modularization blog, it was restricted to 150 lines in one of the project I worked . Some rule may be decided for that.

Currently I tend to forbid them.

Yes. Currently its the same as DATA declariations somewhere in the sourcecode. Forbidden here.

Yes. Currently its the same as DATA declariations somewhere in the sourcecode. Forbidden here.

I respectfully tend to disagree here.

What is the point of declaring everything at the beginning? Does it give the developer any advantage (maybe in old ABAP releases it did)?  One can easily navigate to the variable declaration, wherever it is defined.

If one declares the variable just before using it, it'll save the trouble of navigating to the declararation section, since the variable is in your line-of-sight.

Having said that, i still don't like data declarations inside iterations (LOOP..ENDLOOP, DO..ENDDO etc.). But that's just a personal preference!

Wheres the trouble of navigating when you can jump forward or backward as you said? I still cant see any advantage of having data declaration spreaded in the source code, for me its a kind of laziness not thinking and planning before.

Wheres the trouble of navigating when you can jump forward or backward as you said?

So why should the data be declared at the top?

The data is not declared randomly, rather just before it is required.

I think Horst Keller settles the debate for us - http://help.sap.com/abapdocu_740/en/abeninline_declarations.htm

As I said,  I tend ... so currently I'm looking for pros and cons. If these declarations were only local to the defining block  I would have less concerns, but they can be a global definition and therefore they can be a reason against maintainability

I agree with you on this one though. Developer discretion is highly advised 😛

But may be there's a better place to discuss this? Don't want to spoil this blog and our discussions tend more and more to shift away from the topic.

Personally I think inline declarations are a bad thing.... but then I'm a dinosaur.......

I would highlight the ability to write shorter, expressive code using internal table operators in 7.4. Cf both version of YY_SATRA_INCLUDE, 6200 LoC vs. 4600 LoC, e.g.

As you pointed out, features are added incrementally to the ABAP stack, but real life code has to support older releases. You might have to work with CONCATENATEs, i.e. without string templates 🙁 . And there is always the risk to reduce quality.

Is there any  relation Enhancement Package ?

As far as I know you can not just upgrade ABAP and keep system as ECC 6.0. Whole system needs to be upgraded.

I got it Güngör,

Well, I am wondering without ABAP upgrade , can we ugrade the system ?

Please help me out in understanding - So if I have to create data models in HANA, we have 2 options -

So are you saying that whenever we have scenarios where the ABAP layer needs to read these views, we would use CDS as our strategy?

ANd by implication, if we have no ABAP layer and only native HANA, we just go along creating calculation views.