Once again September 9th was the date for the announcement of a new slate of Apple iPhone devices – this year gives us the iPhone 6S and iPhone 6S Plus with more new exciting features including 3D Touch and an upgraded 12 Megapixel camera.

While all these new features are certainly important, let’s once again look at the Apple iPhone 6s and 6s Plus LTE support. This year, the iPhone 6s and 6s Plus models bring us either 22 or 23 LTE bands (depending on the model – Click the table in this posting to view a larger image)  I’ve covered Apple’s LTE support thrice before: Last year, my September 15, 2014 post detailed the 20 LTE bands available on the Apple 6 and 6 Plus.  In my September 12, 2013 post, I took a detailed look at LTE support for the iPhone 5c/5s models and finally back 3 years ago, in my September 14, 2012 post, where I was excited to see that the iPhone 5 support 5 LTE bands!

For 2015’s iPhone 6s and 6s Plus, Apple’s LTE Advanced supports downlink speeds up to 300 Mbps, under ideal conditions with 23 LTE bands. Last year’s iPhone 6/6 Plus only tentatively supported LTE-Advanced to 150 Mbps and that was not fully realized. This year, various leaked sources indicated that the iPhone 6s/6s Plus would host the Qualcomm MDM9635M chip — also referred to as the “9X35” Gobi modem platform. This supports LTE Cat6 (peak data rate of 300 Mbps), carrier aggregation (40 MHz support with 20 + 20 MHz in downlink) among other specifications.  This means that the 6s and 6s Plus will likely work in networks where the mobile operator is deploying LTE Advanced through carrier aggregation as this chip set (and its associated RF chip set) will support virtually all carrier aggregation band combinations in deployment or planning. This will certainly help Sprint iPhone 6s/6s Plus users as they are leveraging carrier aggregation technology (using 1900 [Band 25] and 2500 [Band 41] bands for download carrier aggregation) and the PCS band for uploads to provide more capacity and better speeds.  See more in this Reddit discussion.

Why are multiple bands so important? The more bands provide more and better coverage within your own network as well as greater possibility of roaming.  Fierce Wireless noted:  “Apple’s iPhone 6s and 6s Plus support LTE Band 12 in the 700 MHz A Block, which T-Mobile has been rapidly deploying where it has such spectrum. That should give T-Mobile a lift because customers who get the new iPhone 6s/6s Plus models will have access to broader coverage, especially in suburban and rural markets. T-Mobile said last month that its 700 MHz LTE deployment now covers 130 million POPs and that the company will get close to 190 million POPs by the end of the year.”

The GSA now indicates that as of September 4, 2015, there are 422 commercially launched LTE networks in 143 countries with 187 LTE1800 and 59 LTE TDD networks. With the iPhone 6s/6s Plus increased number of supported LTE bands, these devices continue to become true world phones.  Our own research shows around 170 LTE networks are supporting roaming, powered by ours and a number of mostly mobile operator group IPXs.

For LTE-Advanced, GSA notes there are now 88 commercially launched systems across 45 countries with 73 commercial networks supporting Cat 6 (supporting maximum speed of 300 Mbps). That too, is good for the iPhone 6s/6s Plus as the evidence fully supports an LTE-Advanced Cat 6 implementation. 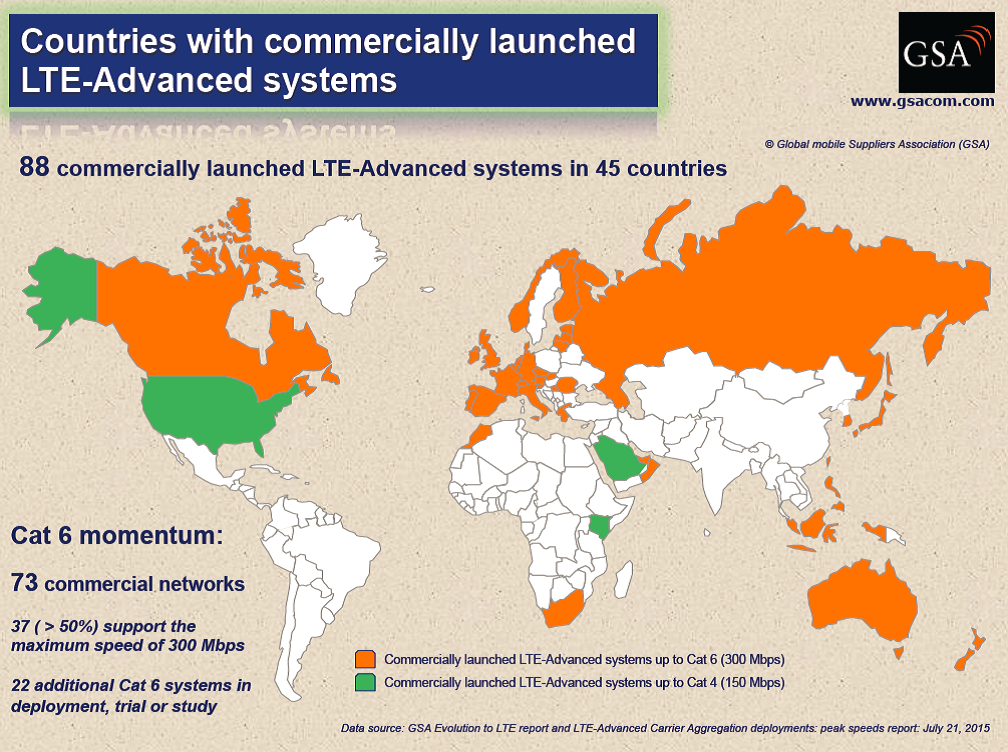 iPhone 6s/6s Plus are not revolutionary in terms of their support for Cat 6 LTE-Advanced; however, they are within the first groups of 50 or so devices (as of this writing) that support LTE-Advanced.  other notable devices with similar support, include Samsung’s Galaxy S6 and a number of devices from Huawei, Sony, ZTE, Nokia, LG, and Motorola.

Coming soon and under discussions across the industry is 5G. At this point, I cannot realistically explain what the 5G technology will be, as many of the specifications are still being finalized.  I am worried; however, that some marketers will refer to LTE-Advanced as “5G.” Between 3GPP, ITU, and marketing arms across the industry, the terms 4G and 5G are quite obfuscated. For example, in the US market, an iPhone will display “4G” when connected to an HSPA+ (which is really 3.5G network).  Fortunately, they display “LTE” when connected to LTE networks.  Will we see “LTE-A” for LTE-Advanced networks?  Stay tuned.  The next few years will be entertaining.

Apple has pre-installed premium apps - get it on tutuapp -  alongside of their official app store in iPhone 6 & iPhone 7 which is a good news for all ios users.