The SAP Community Network is a great place to build reputation and earn recognition for expertise in SAP-related topics. SCN’s long standing Reputation Program is devoted to continually improving how topic expertise is acquired and recognized within the community. 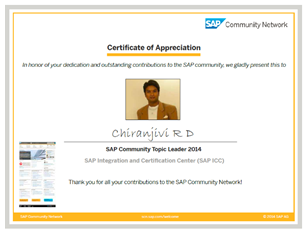 One of the much anticipated and important parts of our Reputation Program is the annual SCN Topic Leader Contest. The purpose of this contest is to recognize the most active experts in certain topics/spaces in the community. Historically, we have recognized top contributors in point categories, and most recently, in topic spaces. The Topic Leader contest winners from past years have received a certificate of achievement and had their names recognized through official blogs. In addition, SCN Topic Leaders attending SAP TechEd were acknowledged at the event for their hard work and contributions to the community.

During the 2012/2013 contest, in order to keep the Topic Leader list meaningful in light of the large number of topic spaces on SCN, we introduced a point threshold. Since then, in addition to being one of the top three members in a topic space in terms of points earned in that space over the contest period, one also has to get a certain minimum number of points in that space within the contest period to qualify as a Topic Leader.

This year we are continuing with the same idea, but the point threshold has been adjusted—it is now set at 480 points.

The table below summarizes the changes to the Topic Leader contest this year:

Members not meeting the threshold of 480 points in a specific space will not be considered for recognition as Topic Leader. However, please do note that this contest is not the only way that we recognize member achievements. All contributions and engagement are being continually recognized through many missions and badges. In addition, valuable members among the top 10 members in a space (points-wise) in the past 12 months are showcased in the leaderboard for that space. Members are highly encouraged to participate in these forms of recognition that are not tied to a particular contest period.

Following is a the basis of the calculation for this year’s Topic Leader Recognition:

In less techie terms: to qualify as a Topic Leader in a space, you must have earned 480 or more points in that space between August 1, 2014 and July 31, 2015, AND you must be one of the top 3 contributors in that topic space. (Please note: points in sub-spaces do not roll up into their parent space. Each space is considered a separate entity.)

The announcement for the 2014-2015 Topic Leader Winners will be published within the next week, followed by a certificate of recognition sent via email to each winner. Further plans to recognize SCN Topic Leaders at SAP TechEd 2015 are underway as well.

Having made this announcement, we look forward to sharing this year’s list of Topic Leaders with excited anticipation. As always, any feedback on the Reputation Program and the Topic Leader Contest is highly encouraged.