I am happy to share with all of you that I recently attended the webcast “Using GuiXT to Manage HR Personnel Actions” presented by Senior Director of Marketing, Synactive and Joy Smith – Business Analyst, Project Manager, Seattle Public Schools. This exciting webcast demonstrated how the SAP user experience was enriched for Seattle Public Schools. It also puts to rest some of the apprehensions that I had about the future of SAP GUI. The compelling presentation outlined the problems/challenges faced by Human Resource Information System (HRIS) staff at Seattle Public Schools and how Synactive solved these problems. Synactive, in my opinion, has really made a case through its work on Seattle Public Schools for the implementation of GuiXT solutions in other public schools too. Synactive did not rely on stopgap solution, but offered a lasting solution based on the thorough understanding of the business needs.  The Seattle story begins in 2012. At that time, the system had 47000 students in 91 schools having a staff of 8000. In another two years, an additional 1000 staff members were hired using the GuiXT solutions. The system currently has 52000 students in 92 schools having a staff of 9000. One of the school districts had implemented SAP R/3 4.6 Financial first time in 2000. It then upgraded to ERP 6.0, HCM, ESS/MSS in 2007. So HRIS already had an experience of using SAP products, but when Synactive approached them, the HRIS staff was understaffed and not happy with SAP. They did not see any tangible benefits of using SAP and were least excited about using any new technology. During the period of engagement, Synactive found that there were too many infotypes. In HR information is organized into info types. Having too many infotypes, meant that users had to visit several screens to make minor edits. Sometimes, to edit a single field, one had to visit separate screens. This made the process cumbersome and irritating. It was also found that lack of defaults and edits resulted in too many errors. There were too many unnecessary messages, which resulted in too many keystrokes and consequently increased errors. As users had to click through too many messages, they sometimes missed messages which they ought to have read. Another major challenge was the issue of concurrent employment. A situation for Concurrent Employment exists when an employee has no full time job and is associated as contract or part-time worker. In such cases, an employee may be paid on an hourly basis. This meant the HR department had to take into account various factors when making a decision on transfers, amount to be paid, etc. Tackling concurrent employment meant too many decisions and headaches. After understanding the challenges, Synactive arrived at a decision ‘not to tackle’ concurrent employment first. It decided to determine the biggest win in HR and came to the conclusion that first project would be the foundation for the next. The company decided to tackle new hire first. Synactic, modified the existing screens with GuiXT, merged fields to reduce the number of screens, and did a lot of changes to configuration particularly related to action. The underlying motto was to keep everything very simple. The company created Action infotype ‘Maintain Personnel Actions’ in SAP standard. The Personnel Actions is accessed through SAP User Menu.

The info-type was divided into two actions: Hire for hiring people outrightly and Hire follow-up for following people that needed to be hired at a later time. The configurations were modified accordingly. Before the adoption of GuiXT, there were chances of hiring the same people that were already hired as the search mechanism was prone to throwing errors when looking for an existing employee. All the fields on the screen had to be entered correctly in order to get a match. Even a single mismatch populated another screen that asked to change the search criteria as no employee was found. 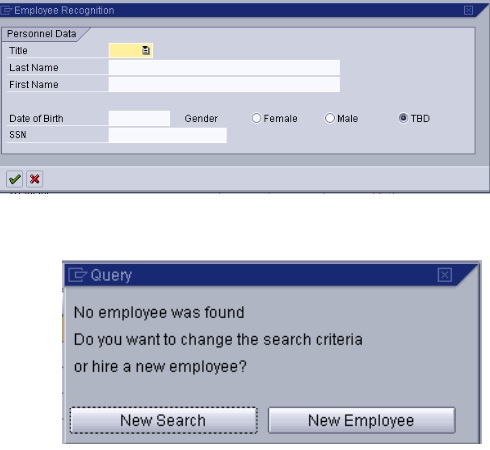 To overcome this problem, personnel data fields were made default types. Under the new process, only SSN number is matched and other values are default values. This reduced the chances of errors to a great degree. Similarly, payroll administrator skills were made default. The standard SAP New Hire process requires you to re-enter the SSN number and all entered data needs to be backed out in case of a mismatch. Under the GuiXT New Hire process, the required fields from different infotypes (screens) were combined onto one screen and additional defaults and edits were provided. Many people shared the same mail stop, but SAP provides informational messages that require  a keystroke to bypass. There are too many unnecessary message to tackle with. Instead of entering the data that is always the same at SSD, the values used were made default. Many configuration changes were done to get rid of unnecessary info types and informational messages. All messages related to male staff were consolidated. Consequently, there were few info-types in Hire Follow-up action. Under the GuiXT solution, after logging in Employment Analysts go directly to HR Personnel Actions screen.

Start date, SSN, and position are required fields. When a match on SSN is found, all assignment data is returned and the Person ID is added to ‘Change Employee’ side of the HR Personnel Action screen. Ethnicity is streamlined and contract type appears for certain positions. 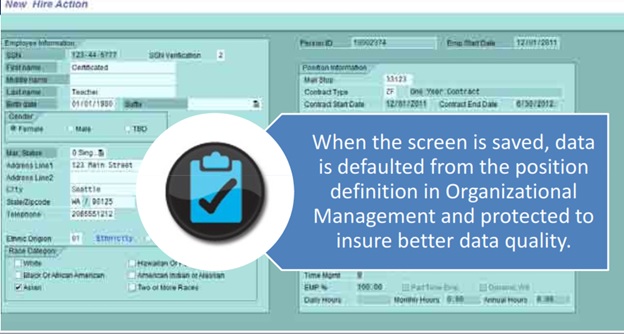 Contract Start and End dates are set according to Contract Type and business rules. The fields will remain blank if an employee does not have a contract. Duplicate info-types were removed. The new info-types were kept as separate screens due to the complexity and quantity of fields to enter. The information is well organized to help users to select the correct assignment. When entering personal data, there is an option to choose Hispanic or non-Hispanic. If you click non-Hispanic, you have to enter the race category. By keeping things simple, Synactic minimized errors relating to hiring, enhanced speed of entering data, thereby enriching the staffing practice at Seattle Public Schools. The staff members were thrilled to see the tangible gains and reported a saving of five hours a week during regular staffing times. This would of course go higher in springtime when there is a higher workload. After the success of the New Hire process, the Leave process was streamlined.

Some additional buttons were provided and linked to FMLA workbench, CATS, and IT 2001. As the user hits the Person ID field, it calls the ABAP program to fetch a table with assignment information. Then the correct assignment is selected. An employee may be having several assignments within the organization. To have a correct assessment of effort hours, TimeEvaluation button is clicked. The work-effort details are displayed. 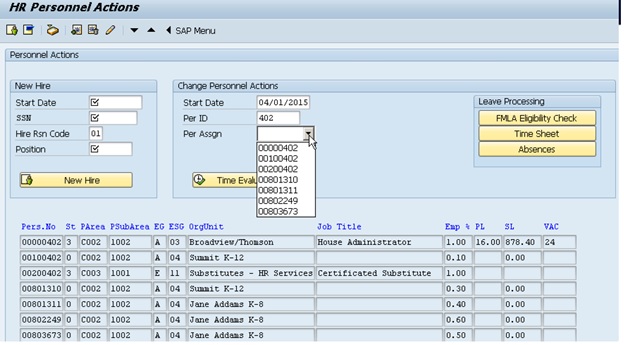 A button was added to retrieve the current position and made restrictions to allowable actions and reason codes.

For instance, if you change the current position with a new position, then click Change Pers Actions button, all the information related to the new position will be populated. The data needed to process each action is defaulted from needed info types, with minimal data entry. Required fields are also determined by actions. I think, it is a seminal way of calculating leave accruals. The key changes introduced by Synactive include having a landing page from where the users could launch all programs, combining fields & default in values, using buttons to toggle between screens, doing away with unneeded messages. During the presentation, the speakers also shared interesting data regarding the SAP GUI. According to them, SAP GUI 80% of users still use SAP GUI/Dynpro screens. Only 20% use other UI technologies. For most companies, ERP systems are among the most complex IT solutions. Therefore, they are extremely cautious when making changes to these mission critical applications. Very few companies will shift towards cloud. So, SAPGUI is here to stay and is not going away. The presentation also showcased Liquid GuiXT’s new products and UI themes. It was quite heartening for me to see that the company is HANA-ready and mobile-ready. The company has successfully integrated SAPGUI desktop options in other devices too. Liquid apps can be run on iOS and Android too. It is quite a joy to watch sample applications being run on different platforms. It is a good example of utilizing a single development effort for multiple touch points.