SAP Forms as a Service is a new PDF form rendering service on the HANA Cloud Platform (HCP).  It is a cloud service for the rendering and de-assembly of PDF forms, based on the Adobe Document Services (ADS) component that traditionally runs on an SAP NetWeaver JAVA stack on premise.  It is a version of SAP Interactive Forms by Adobe with the ADS component in the cloud.

Since the ‘Form Processing Framework’ and template repository remain on premise, this is a hybrid solution for delivering SAP Forms.

Functionally this provides the same scope as the on premise version:

The interactive forms can be ‘static’ in order to support annotations, or ‘dynamic’ to support client-side presentation logic.  The technology supports attachments, digital signatures and server signatures/certificates.

The only significant difference, apart from some restrictions on digital signatures (HSM / MSCAPI credentials) is that the HCP version does not support parallelization, which has been essential for some customers who need to generate very high numbers of documents.

Setting up the new service is straightforward.  The first step is to subscribe to the new service.  This allows you to assign roles and then configure the ADS service through the HANA Cloud Platform.

Then you re-point your on premise ABAP stacks by configuring a new ‘ADS’ RFC connection in transaction SM59, and import some certificates to the Trust Manager in transaction STRUST in order to establish an SSL connection to the cloud.

Finally, some scenarios require the HANA Cloud Connector, and so this also needs to be set up and configured. 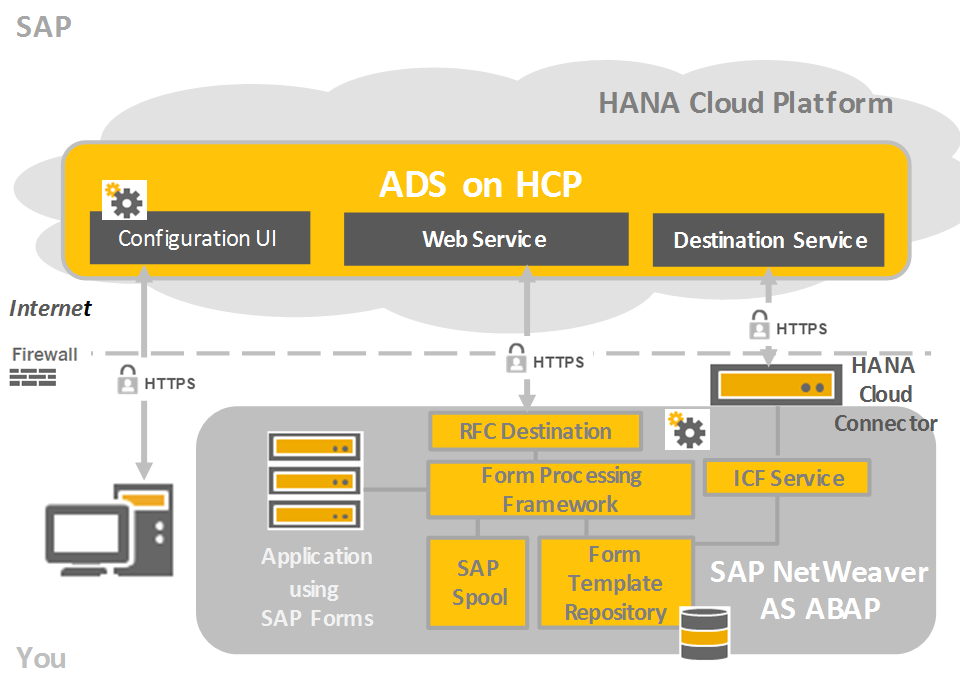 Benefits of the new approach

SAP Forms as a Service provides a number of benefits:

The licensing model is simplified and may benefit many but not all customers:  The on premise arrangement is that [i] print forms are free, and [ii] customers pay for the use of interactive forms that are not pre-delivered by SAP.  The cloud model makes no distinction between the types of form, but is based purely on a package of billable requests.

Arch worked with SAP on a Customer Engagement Initiative and a Customer Validation Initiative for SAP Forms as a Service, and we conducted wide-ranging testing, which included:

All the scenarios were validated successfully, and so we are content that our products FLM and Aquiller both support SAP Forms as a Service.

The performance test results, however, were disappointing for larger or more complex form templates.  We are hoping that this is an issue that SAP will address in the coming months, and hopefully an upgraded HANA Cloud Platform in 2016 will have a positive impact.

Our recommendation is that SAP Forms as a Service should be used for processes that use simple form templates, or processes where no user is waiting for the form to render.

The best use-case for SAP Interactive Forms as a Service is for standard output forms, where the printing or output is performed by a batch job, so that nobody is waiting.  On occasion, a render will be required for ‘print preview’, and ideally the ADS render should take less than 1 second.  This should be possible with careful form template design.

The other scenario that we recommend the service for is off-line interactive forms. Since off-line forms are normally either distributed by e-mail or rendered at design-time, there is no user waiting for the form to render.

We now recommend HTML forms for all on-line scenarios unless specific PDF functionality is required.  This is partly due to the rendering time for PDF interactive forms, but also due to diminishing browser support for on-line PDF forms.  Web browsers now support PDF reading as a standard feature, but do not support interactive PDF forms.  We see this on mobile devices such as iPads and Android tablets, in Google Chrome and now in ‘Microsoft Edge’ (the Windows 10 browser).

Arch FLM can help customers make the move to SAP Forms as a Service by providing the on premise form processing framework for ADS integration, and by providing the HTML alternative for on-line PDF forms which are approaching end-of-life.

For SAP output scenarios, customers should consider moving to SAP Forms as a Service.  In addition, look at HTML e-mail output to replace some print or PDF attachment  scenarios.

For non interactive forms using the SAP  Adobe forms can we generate the html to PDF attachment using the web cloud of Hana. ?

I'm not 100% sure I understand the question!

With ADS on the HANA Cloud you can generate non-interactive PDF attachments on the cloud instead of on premise.  But this does not create HTML or convert HTML to PDF.

My question is will ADS on premise or on the HANA cloud is capable of coverting the HTML to the OTF data as we do not have the converters provided in SAP ?

But take a look at Floe www.arch-global/floe/ because this might satisfy your e-mailing from SAP requirements.