This past week ASUG held the ASUG SAP Analytics BusinessObjects Conference in Austin, Texas.  The conference used hashtag #SABOUC and had high activity on Twitter.  ASUG’s Ashley Hannon explains the story behind the hashtag here.

I pulled the tweets starting from Sunday afternoon before conference orientation to yesterday.  Some elementary text analysis using SAP Lumira tag clouds are shown below.

What is interesting is you see some products mixed in with the social media topics – Lumira, Design Studio, HANA for instance.  Additionally SAP was taking pictures for their Data Genius contest and that shows up.

Top activity by twitter handle is shown above.  It’s no surprise the SAP Analytics, ASUG, ASUG BI twitter handles were mentioned.  Also active too was the SAP University Alliance.  I didn’t see SAP’s Ty Miller tweet, but he was mentioned in tweets.

SAP Analytics was mentioned the most – largely because they had a Data Genius picture contest where you had to mention their twitter handle.

Who tweeted the most? 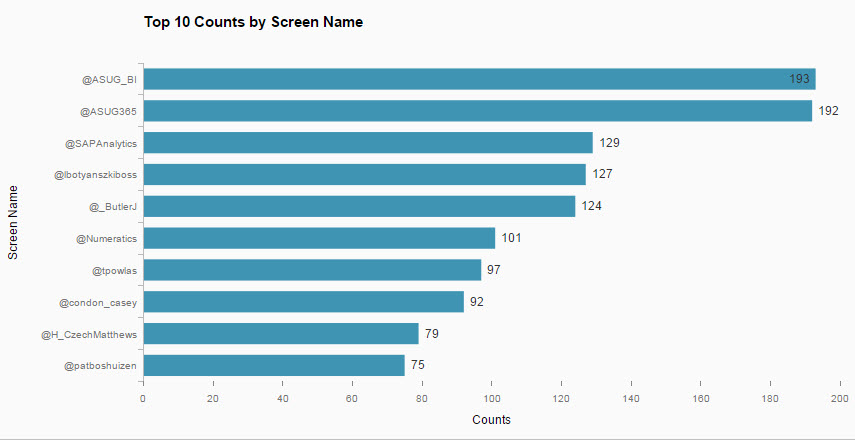 I hope Livia joins SCN to share her experiences.  She also participated in the Developer Wars event.

ASUG Volunteer Joyce Butler was also in the top 10 for tweets.

The above shows the time zone of the tweeters’ screen names.  Interesting that most came from the East Coast of the United States, given that the event was held in Austin which is in the Central Time zone.

It is interesting to me too that Quito, Ecuador shows up in the top 10 as well. 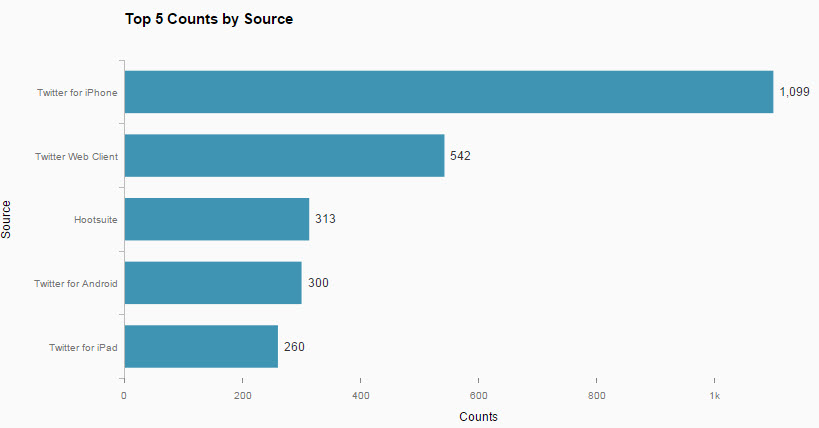 The iPhone was the top device used to tweet.

Most of the tweets over the event occurred on Monday, the first day of the event.  The event ended Wednesday, September 2nd.  Next year’s event will be October 18-20 in New Orleans.

Overall the event had high activity on twitter.  Should I enter this in the DataGenius IV: Home contest?

ASUG’s next big event that includes BI is SAP TechEd Las Vegas next month starting October 19 – see you there at a pre-conference session?

how did you extract the data from twitter with SAP Lumira?

Michael - thank you for reading - I downloaded the tweets with the hashtag to Excel, and then used Lumira to report from Excel.