More control over how Models can be compared in SAP Predictive Analytics 2.3

The ability to compare models (or data sets) using a component in a chain makes things simpler for the analysts. The first step was taken in a previous release where this was achieved by dropping a new component in a analysis chain which internally compared the Key Performance Indicators (KPIs) and a

highlighted the best node. Now, with this new release, more control is afforded to the analyst where one can select the KPIs they want the compare performance on and also specify an order to break a tie if such a condition occurred. The compare node also lets the user pick a partition set for the comparison thus requiring the partition component to be present before the algorithms in the chain.

Lets have a look at this process flow step by step where we’ll build a chain using a data set on SAP HANA.

Step 1: Select a data set on SAP HANA to build the chain

We’ll start the analysis by picking a view or table on SAP HANA and connect a Partition node so the data set is split into three sets. This will be used by the Model Statistics and Compare components following training. We’ll then add three algorithms, classification from APL, Naive Bayes from PAL and a CNR tree in R.

Lets configure the partition node to split the data set into three slices of 80% for training, 10% for validation and 10% for testing the generated models.

We’ll then configure the individual algorithms so they are ready to be trained on the train slice of the data set.

Note: the size of Validation and Test sets has to be greater than or equal to 10%.

The three components automatically take the name of their parents and now these nodes can be configured though a very simple properties panel by double clicking on the components or through the context menu. 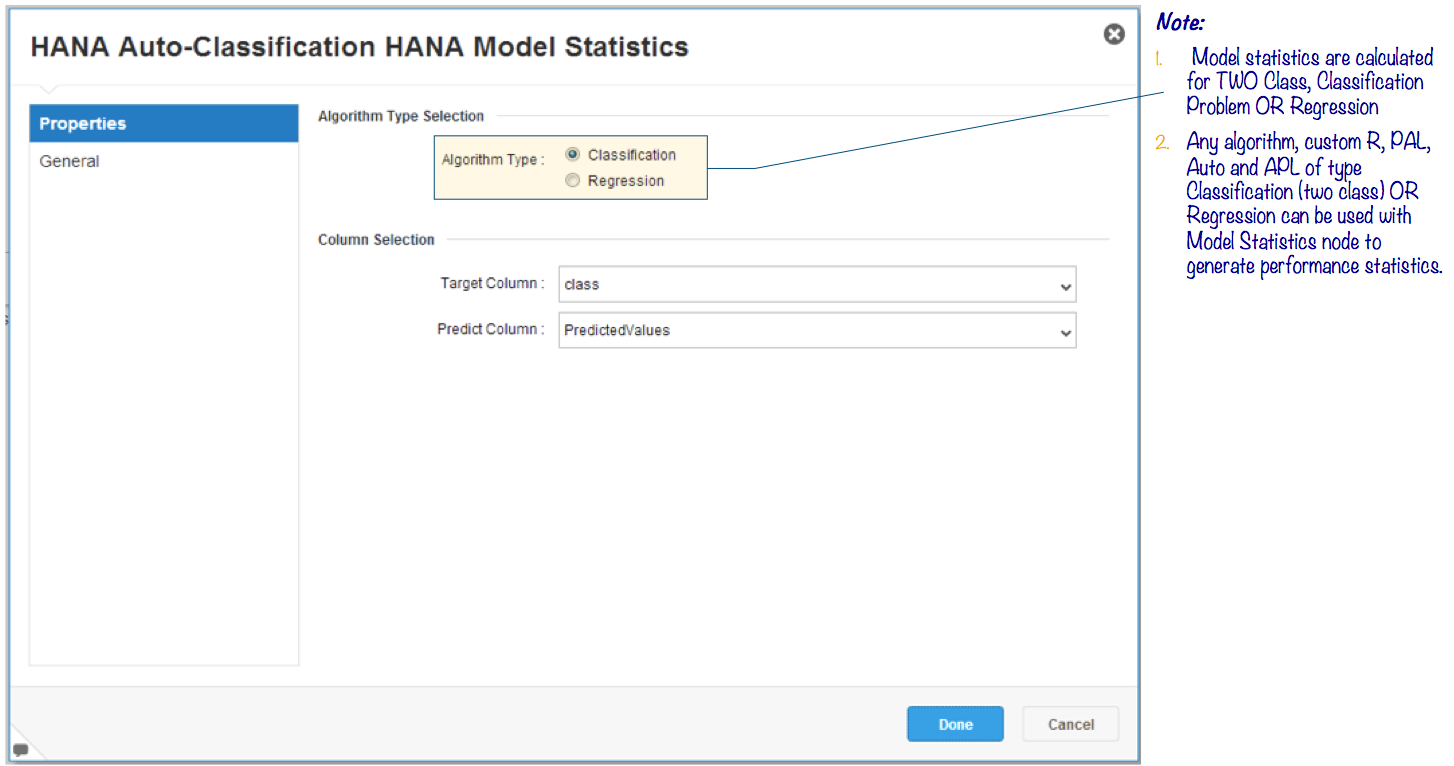 The Target Column is the column used as the target or dependent column in the supervised training of the parent component and the Predicted Column is the column that lists the predicted values generated by the trained algorithm/model. Availability of this independent component makes it possible for the analyst to compute performance statistics for not just the standard algorithms available in the solution but on custom components and data sets too.

Now, the Compare component can be connected to the other Model Statistics components by dragging and dropping on them one by one.

Note: For simplicity, this example uses three parents but Model Compare node can be used to compare more than that at a time.

Once all parent components are connected, the Model Compare component can now be configured.

Step 4: Configure the Model Compare node to define how you would like it to compare models

The Model Compare component can be configured in four different ways..

A Model Statistics component is required to be the parent of Model Compare since it relies on the statistics calculated by it. It also get the algorithm type (classification or regression) from it and displays different KPIs based on it.

When comparing Classification algorithms, the properties panel lists the KPIs relevant to classification modeling as below: Here, the analyst can pick which slice of the partitioned data set should be used to compare the performance of the individual KPIs selected. The order of the KPIs will be used in situations where there is a tie in the KPI being compared.

The properties panel lists KPIs relevant to regression modeling and the analyst can choose the partition slice to use for comparing the performance of training the models. 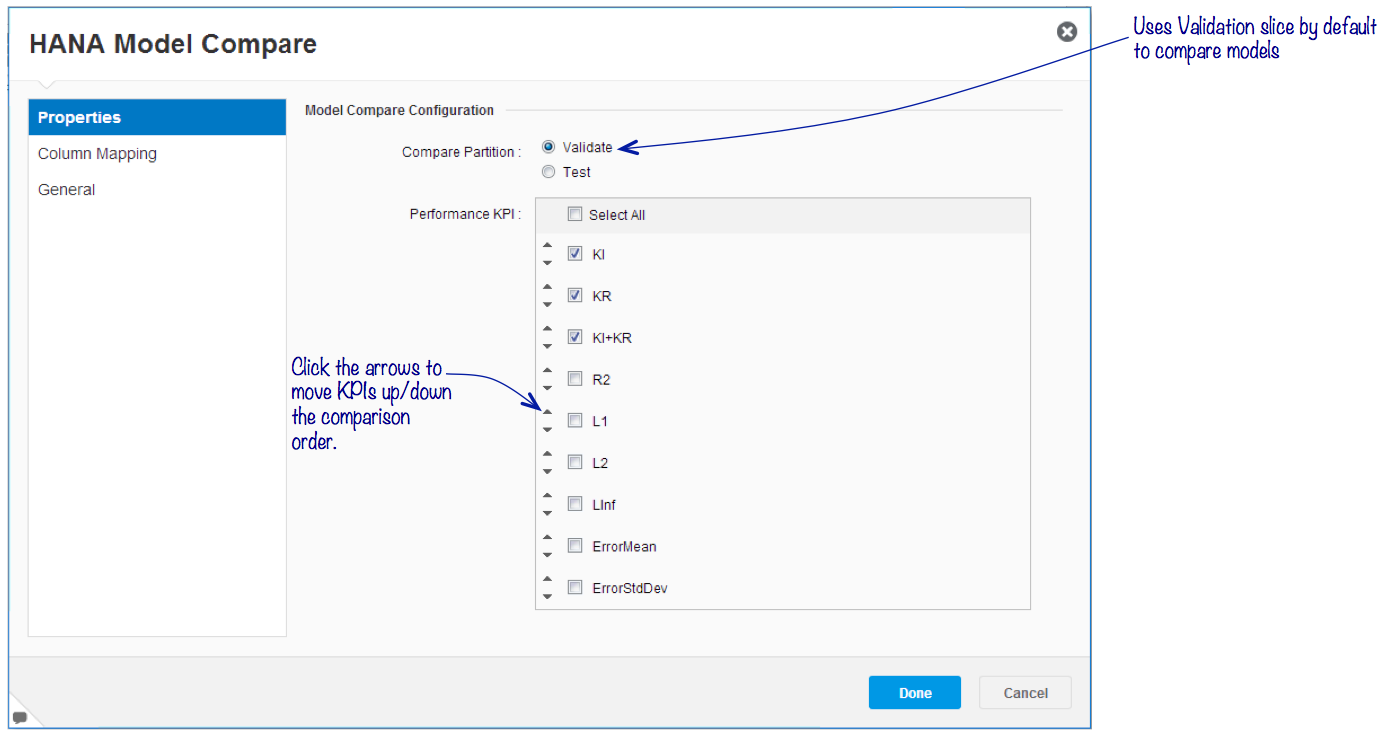 When comparing two algorithms/models, the following mapping screen will be enabled to allow column mapping. 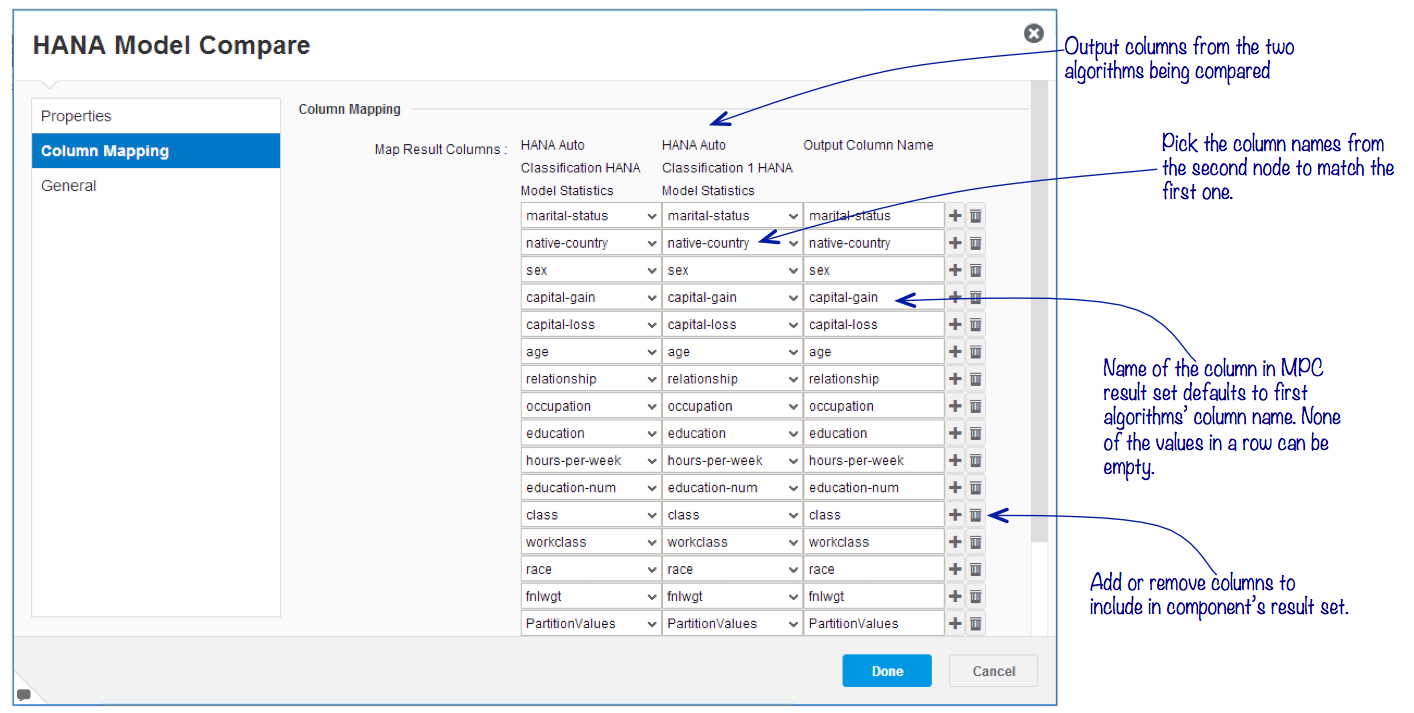 Icons: The icon on the Model Compare node will change indicating whether or not the analysis can be further extend.

Indicates the Model Compare is working with two parents and can be extend.

Indicates the Model Compare is working with multiple parents and that its a terminal/leaf node in the analysis.

Now that all the components in the analysis chain have been configured, clicking on the run button will execute the training of the chain. It can also be triggered from the context menu on the last component in the chain.

Results tab will show the results and performance of the training. Also, it is now possible to export the best algorithm as stored procedure directly from the Model Compare component.

The Results tab will have the summary of individual components. The Model Statistics and Compare summary will now show more details on per partition. Here is a sample summary from the Model Compare component comparing with three Classification algorithms/models: It indicates the best model based on the KIPs selected and the partition used for comparison. Regression comparison results will list the regression KPIs. The KPIs in bold highlight the ones selected in the Model Compare properties panel and algorithms/models in bold indicate the best performer in a partition. The best node chosen based on Model Compare configuration is indicated in blue with the star icon. 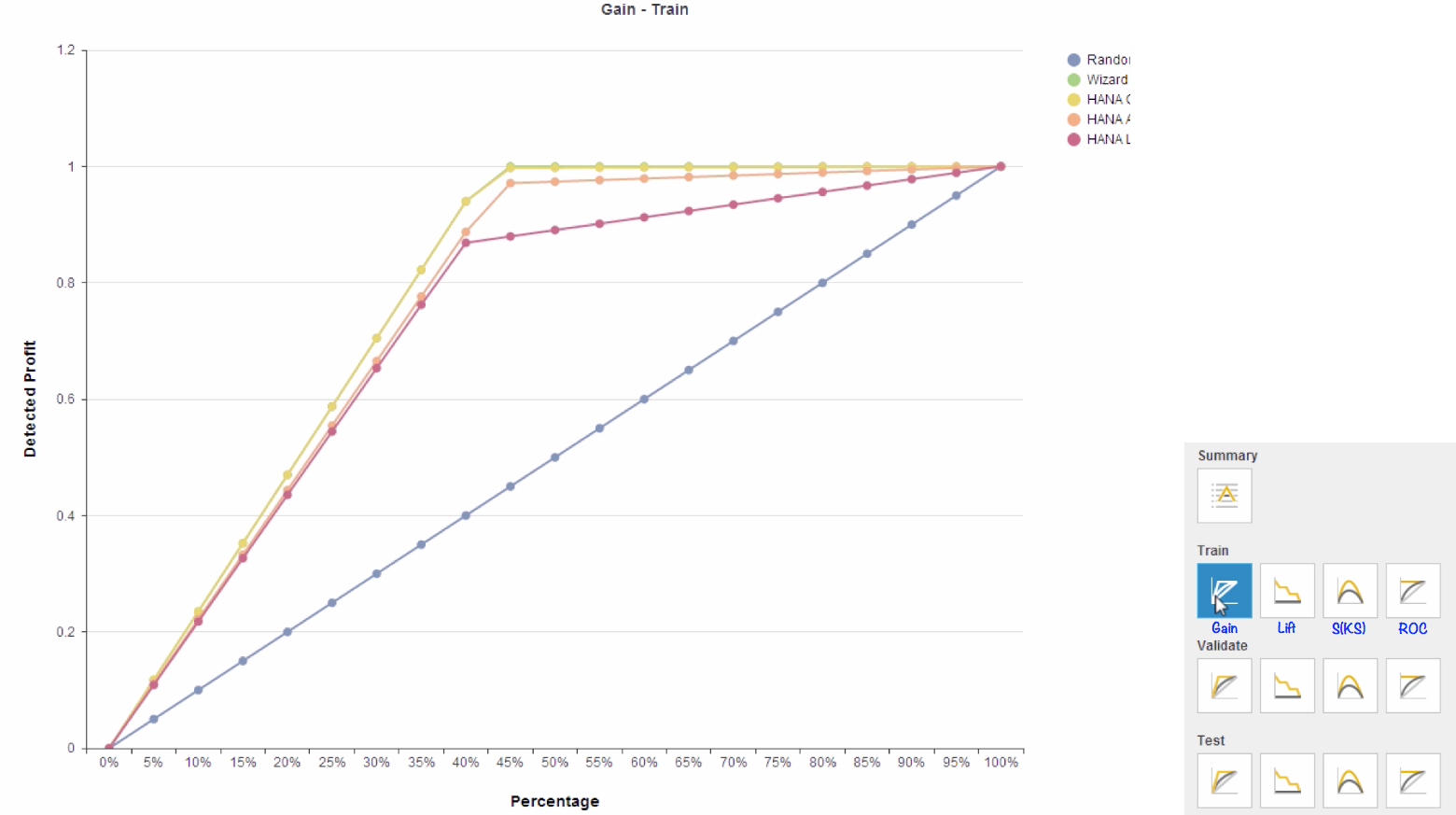 Following table lists all the Classification KPIs with descriptions:

Following table lists all the Regression KPIs with descriptions: