Background: SAP provides the necessary mechanism and tools such as the SAP Transport Management System (STMS) for the transport procedure. This is a SAP designed tool to ensure that data and objects are migrated correctly and are accurately tracked from system to system and client to client.

However, In order to simplify the process and enable change management/approvals on the go, We have come up with a custom process which may be used for approving the transport requests from one environment to another. We have come up with a set of applications which can be used for approvals in Development, Quality and Pre-Production, before finally the change is reflected in the production environment. The applications are fiori like i.e. they are built using Fiori principles and can be accessed on desktops/laptops as well as tablets and smartphones.

Let us look at the process: 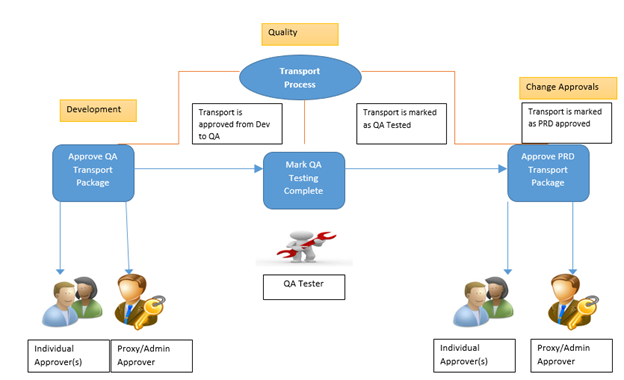 We have created a custom transaction in ECC which facilitates the creation of transport packages from the released TR’s. Corresponding custom tables related to package information and user authorization are maintained in ECC. Once the package is created and released for quality by the developer, the status of the package is changed to ‘Pending QA’.

We have built a Fiori like applications for each environment which, which can be used by authorized approvers to review the transport information and approve the transports so that they can be moved further ahead. The user can access the applications via the Fiori Launchpad: 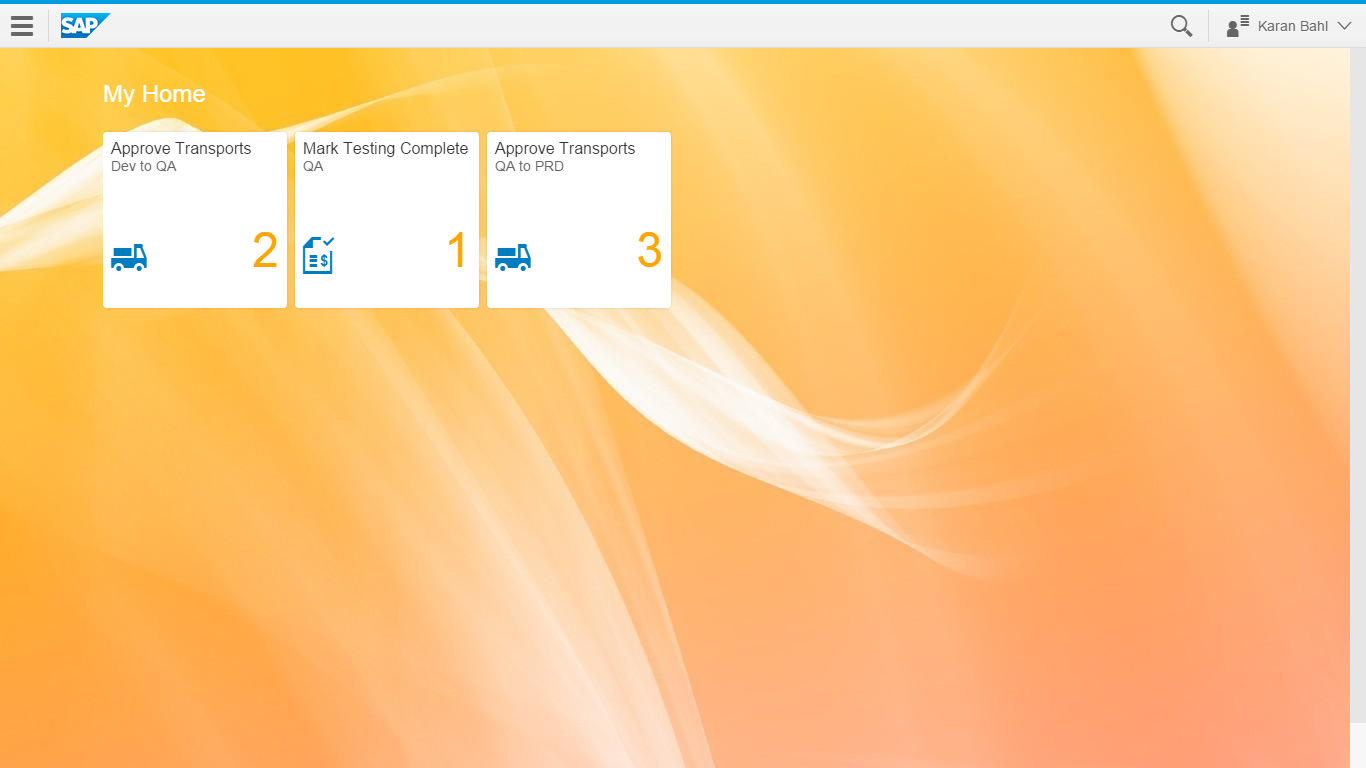 Once the user clicks on the tile, he is able to see the corresponding transport requests (and their details) pending for approval (status as pending QA) against his name on the following screen. 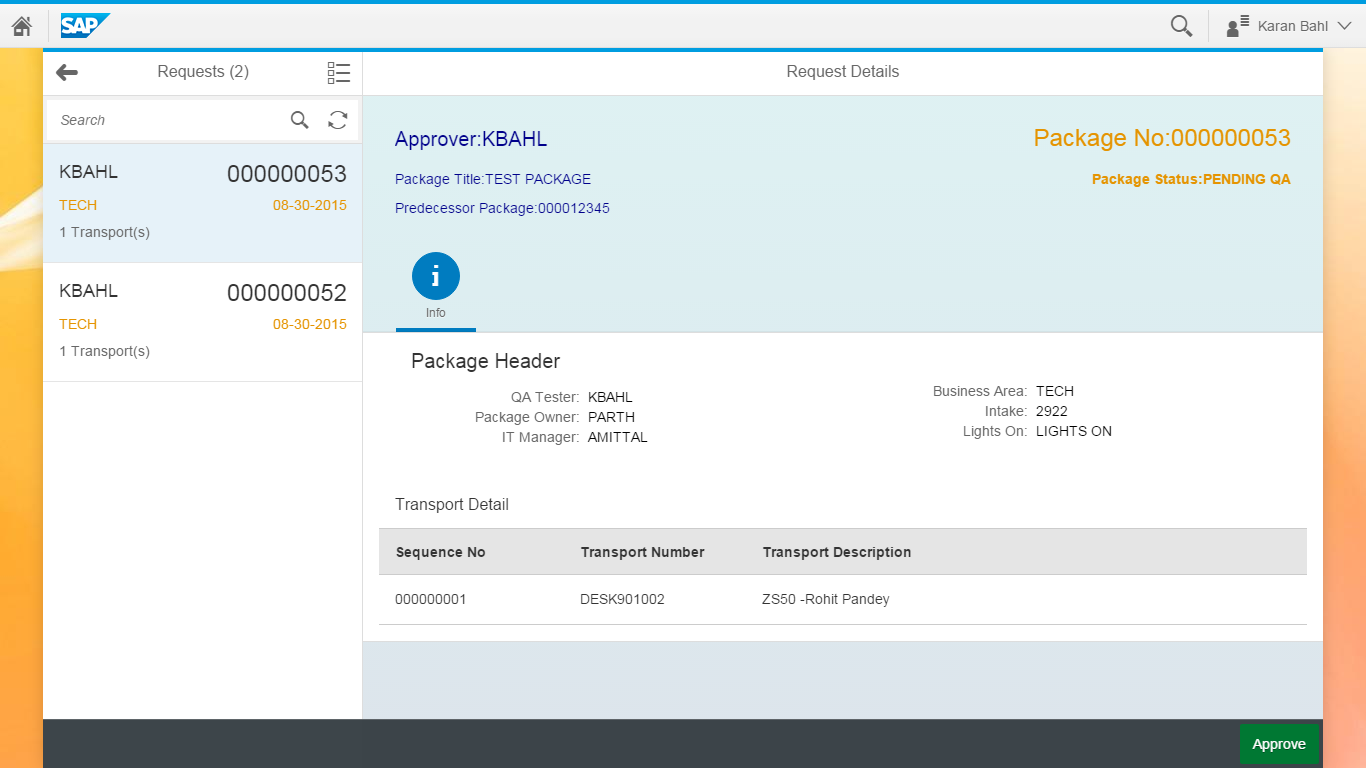 The user can review the details and approve the package on the go. Also, if he has the appropriate authorizations, he can filter the requests based on the approver and business area, and approve requests on their behalf if they are not available. 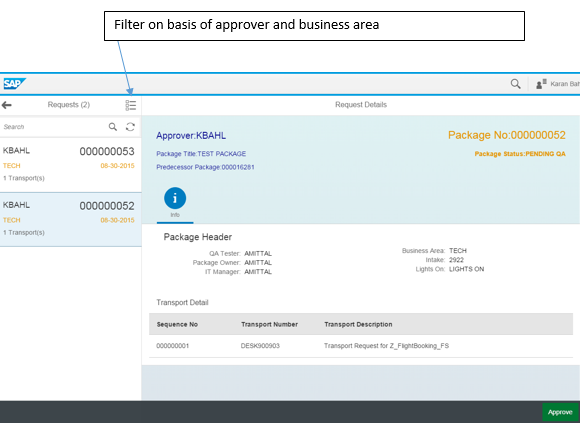 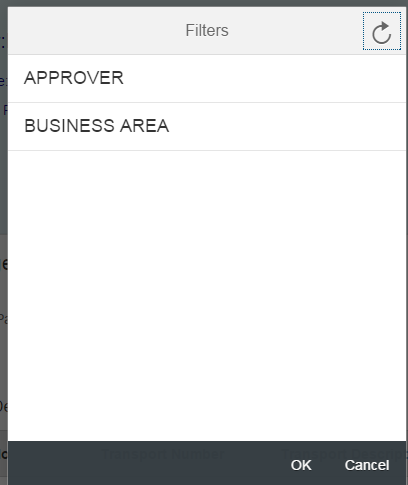 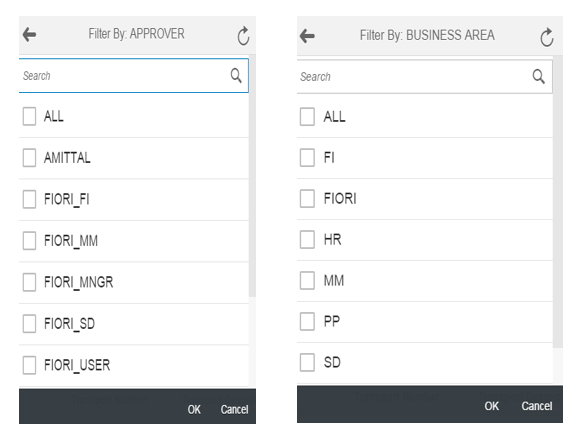 Now, when the user clicks on Approve. Validations are made whether the package contains the TR(s) which have been released, If they are not released an error message is prompted stating All Transports must be released first. 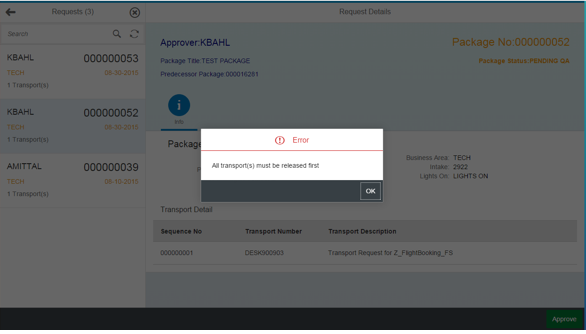 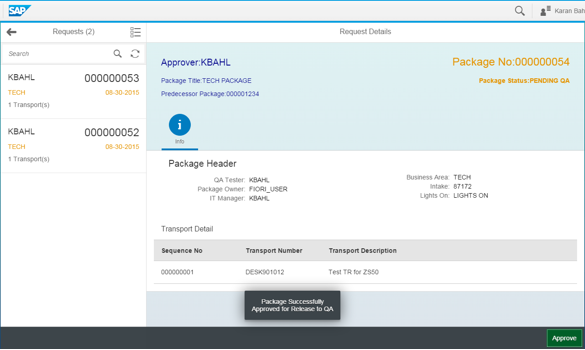 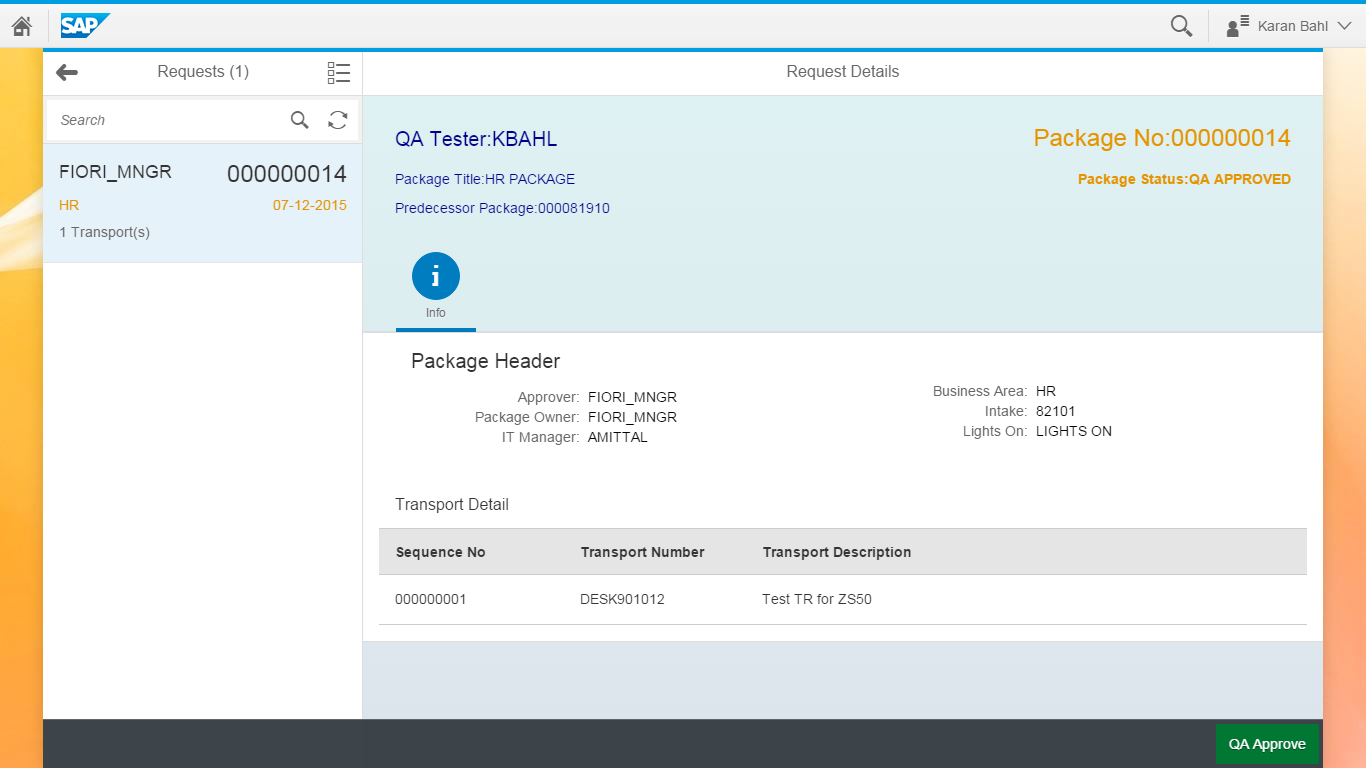 Similar validations for authorization are tested for as in the Approve Dev to QA Application. And when all validations are successful, the package is successfully marked as QA Tested. 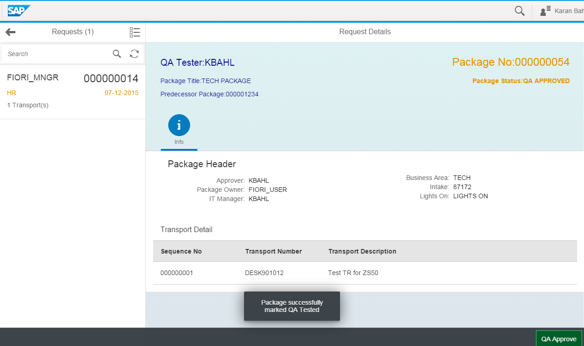 Similar validations for authorization are tested for as in the other two applications. And when all validations are successful, the package is successfully marked to be imported into production. 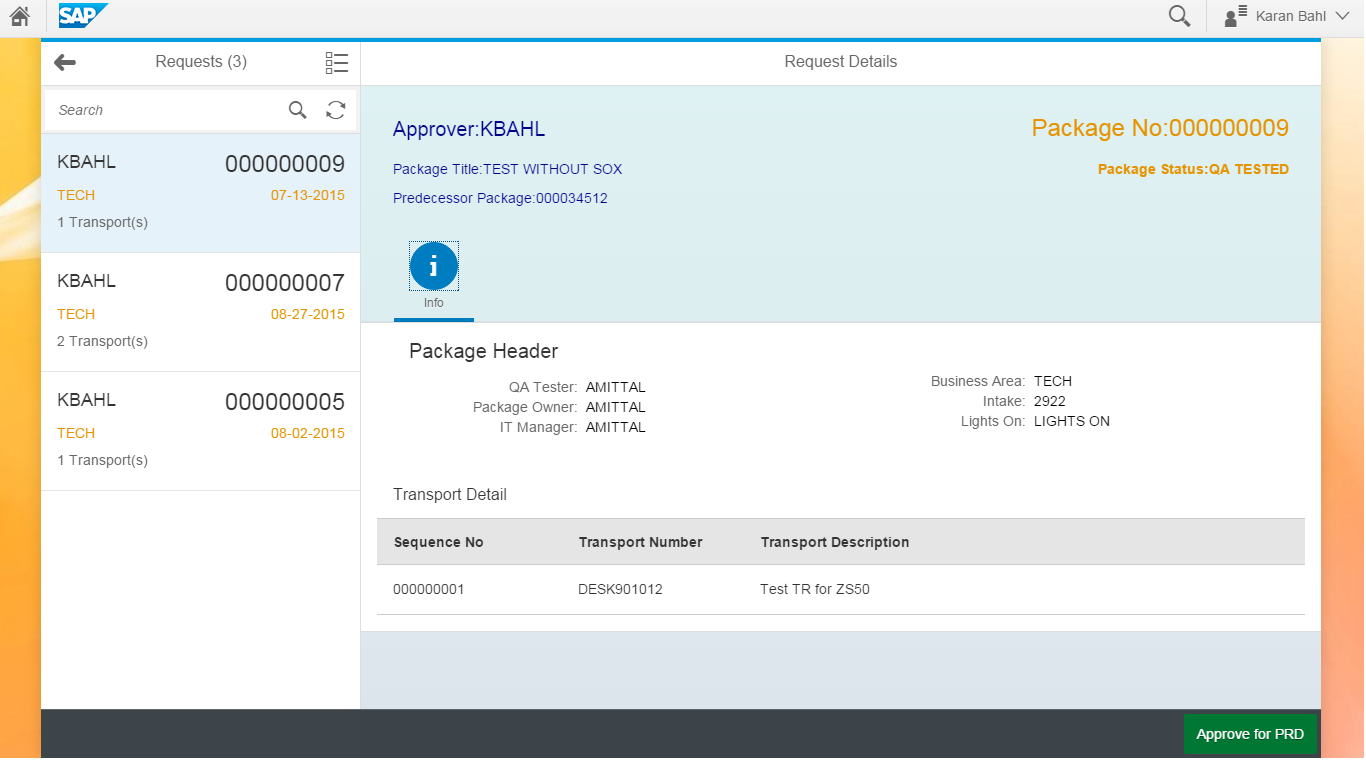 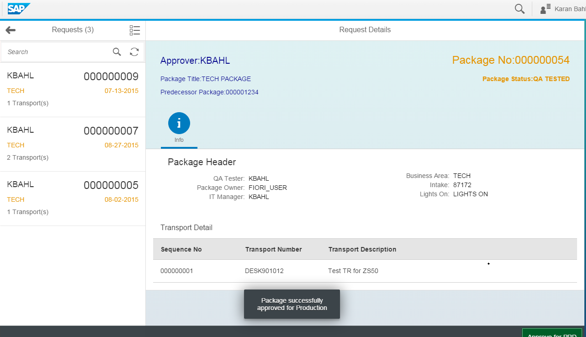 Thus, the transport approval process is simplified and can be achieved on the go without the approvers needing to be in front of their systems or on their official network.

Hope you, the reader enjoyed this blog. Feel free to comment your feedback, suggestions and improvements to the process/application.

Very Informative Mr. Bahl, looking forward to some more blogs from you.

The screenshots used are very helpful.

Excellent blog. Very nicely put and informative. This is definitely going to help in strategizing in future. Keep the knowledge flowing...All the best.

Thanks for an excellent blog Karan. Very descriptive and informative. Keep the knowledge flowing.

Sorry for replying so late, I was on vacation. This all looks really great and we thank you for your great contribution and the work you put into it. Your contribution is of course accepted for the challenge and we will send you in the next time a participation reward for your contribution. Could you send me your email address via our SAP Portal email account: sapportal@sap.com?

Kind regards and many thanks
Vera

Thank you for your response. As directed, I have mailed my email address on the mentioned email.

Please confirm whether you have received my mail.

Yes, I received it. The reward will be sent to you in the next time.

Great blog.  Out of interest, does this just handle the approval process, or does this automate and integrate the transportation process too?

Currently it handles the approval process in a way it triggers an email to basis team for the movement of transports post approval. However, it can be further improved upon by extending the functionality.

Excellent app, and thanks for sharing with everyone.

I had a question, how do you manage to validate the transports from ECC from your app.

We have created a whole process around it which reads the transport tables along with their status.

It's good to see you as a Finalist award winner in Cloud portal developer Challenge.

Keep the good work up