A friend recently said to me: “I feel so old. I had to show a young guy in the office how to use a fax machine.”

I replied, “Why were you using a fax machine? Was your Morse Code telegraph on the fritz?”

OK, maybe I was being a little harsh. I’m also old enough to remember when fax machines were a staple in any office — one of the pieces of equipment that combined to provide communications convenience. And, as my friend will tell you, a fax machine sometimes still serves a purpose. But in this day and age, separate devices for sending messages, making calls, sharing documents, capturing pictures and audio, etc., have been made mostly obsolete by the ubiquitous smartphone. 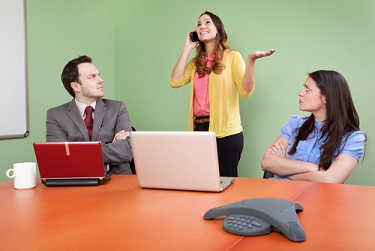 Mobile devices are commonplace and, as a new Pew study shows, finding acceptance in more public settings — at least in the United States. Whereas not too long ago, the frequent use of smartphones publicly was a breach of social etiquette, most people nowadays are generally OK with cell-phone usage. Of the 3,217 American adults surveyed for the Pew study, the majority had no problem using cell phones while walking down the street (77%), riding public transportation (75%), or waiting in a line (74%).

(Before you mourn the decline of civilization, please note that most people don’t approve of cell-phone usage in a restaurant, during family dinner, or at a church or other place of worship. On the downside, 5% of those surveyed see nothing wrong with pulling out their smartphones in movie theaters. When it comes to phones in theaters, no society should tolerate a number above 0%. Same goes for libraries.)

While the study focused primarily on how mobile phones impact group interactions socially, we should not overlook the growing — and alarming — frequency of mobile devices in certain questionable situations around the office.

Smartphones certainly make work easier — and are comforting to those who expect the same mobile convenience in both their personal and professional lives. (As Hasso Plattner, chairman of the SAP Supervisory Board, noted during his SAPPHIRE NOW keynote in May, “People simply cannot go to their jobs and work on ancient systems when at home they are working more efficiently on their iPhones and iPads.”)

Still, we need to draw the line somewhere. And when it comes to where smartphones can be used around the office, I’m drawing the line at…

Restrooms: Remember the good ol’ days when if somebody came into the bathroom talking on a phone, you could flush a toilet and embarrass him into leaving? Not anymore. Guys will have full-blown conversations in a stall without the slightest concern about any noise around them. It’s like they have no self-awareness. Or pride. Or rudimentary intelligence.

Nobody — I mean nobody — is so important that he can’t take a few minutes to handle some private business.

If you find yourself on a long call and one of your internal organs is about to burst, politely excuse yourself for a few minutes. Put the call on hold, or hang up and promise to dial back. (Muting doesn’t count. Leave the phone outside or in your pocket.)

If you can’t get off the call, just hang up. Rush to the restroom, be quick about it, wash your hands, leave, and call back. Say, “That was weird, I lost my connection all of a sudden. Sorry about that.” Pick up the conversation where you left off. Yeah, you’re fibbing, but it’s better than the alternative.

Because the alternative is disgusting. So stop. Seriously.

(I should point out that all of the above is based on the nastiness I’ve witnessed in the men’s room. I can’t comment about what goes on in the ladies’ room. But if the above applies, please take note.)

Aisles, rows, corridors, hallways, etc., in common areas: It’s wonderful that mobile technology gives us the ability to connect on the go. But just because you can wander around an office environment doesn’t make all of it an extension of your work space.

There’s nothing worse than trying to navigate back to my desk with a cup of coffee, while an oblivious colleague is staggering on a collision course toward me, with his nose down in his phone, momentarily forgetting that he and his device are not the only things in existence.

Oh. Wait. There is something worse — when a colleague is meandering around my seat, talking full volume on his phone.

Quiet is a precious commodity in a cubicle setting, and our cramped desks have little privacy as it is. Do you have to make it worse by pacing up and down, carrying on a loud conversation, around your colleagues? Nobody wants to hear you. You’re not impressing anyone. You’re annoying them.

Can’t bear to sit at your desk and chat? Grab an office, shut the door, and pace and talk to your heart’s content. No offices available? Go in the parking lot. Go on the roof. Take a stroll in traffic. I don’t care. Just don’t distract me from my job. Which is what you do when I see you moving in my peripheral vision and detect your voice growing closer, then further, then closer.

Maybe you think I’m an isolated crank, so let me tell you: When a talker/pacer encroaches into my cubicle territory, pack mentality kicks in. My nearby colleagues and I stand, look over the walls at each other, and share a silent expression that says, “Is it your turn to throw something at this obnoxious interloper or mine?”

Lunchroom: If your office has a break room or cafeteria where you can sit and enjoy a leisurely lunch with colleagues, consider yourself lucky. A lot of officer workers are stuffing fast food down their throats at their desks. So take advantage and meet up with colleagues.

There’s more to the lunch break than eating lunch. It’s a mid-day chance to unwind, connect with co-workers, and recharge. So why would you ruin this one-time-of-day experience with a smartphone that you check regularly during every other waking hour? Sure, it’s a miracle of the modern age that you can use your phone to interact with millions of people, but don’t do that at the expense of ignoring the life form on the other side of the table from you.

Put the phone down. Make eye contact. Have a conversation. Trade your peanut butter sandwich for a cupcake. Live a little.

I realize that you may have a job where you need to be on call 24/7, so try this. Put your phone on vibrate. Set it, screen down, on the table. If the phone vibrates, pick it up to check who is calling. (Say “excuse me” first to the people around you.) Is the caller someone who requires your immediate attention? No? Put the phone back down. Yes? Answer and say, “I’m in the middle of lunch. Can I call you back?” (If it’s your boss, and he’s the kind of guy who gets upset when you dare to eat and socialize, tell him that you’re busy in a working lunch. That’s technically true, since you’re eating lunch with people you work with.)

If the person on the other end of the line absolutely positively must talk to you right away, excuse yourself (again) from the table and take the conversation somewhere else. (As noted above, nobody wants to hear your conversation.)

Oh, and if you’re expecting a call, tell the people at lunch in advance. They’ll understand.

The screen-down part of this rule is crucial. With the screen down, you won’t be tempted to scan social media or play with apps. Granted, you won’t see text or e-mail either, but let’s face it: If there’s an emergency and you get an e-mail instead of a call, it’s really not much of an emergency, is it?

Meetings: Let me tell you a story. Once upon a time, I was having a one-on-one teleconference meeting with someone (or, as non-corporate types call it, a phone conversation). As I began to talk, she began to eat carrots. Loud, crunchy carrots. And throughout the meeting, she talked with loud, crunchy carrots in her mouth.

Her excuse? She said, “Sorry, I’m in meetings all day, and this is the only time I can eat.”

What she was really saying was, “Sorry, I’m in meetings all day, and yours is the one that matters least to me, so I hope you like the sound of carrots being eaten.”

Most people don’t enjoy meetings. But all people who lead meetings want to feel like attendees care. And whether you’re eating carrots or staring at your phone, you’re sending a clear message about the meeting’s priority (i.e., it’s not a priority).

When you pick up your phone during a meeting, you’re essentially saying, “No, honest, this meeting is riveting, but I really need to look at this cute cat pic right now.”

It’s rude. It’s insulting. It’s wrong. And it happens a lot. Which is weird, because according to the Pew study, only 5% of people surveyed said it was OK to use cell phones in meetings.

Those people have never worked anywhere I have, that’s for sure.

Most of the lunchroom rules apply here: Put phone on vibrate. Put screen down. Only take important calls. Excuse yourself when you do.

And, as with lunchrooms, warn people if you’re expecting an important call.

Even if you aren’t.

By the way, if you’re in a teleconference meeting (not in a meeting room), you’re on the honor system. Set your phone aside. And don’t check Facebook on your computer either.

A final thought…and admission. Hypocrite that I am, I have violated some of the rules above. I won’t identify which. (I don’t want to tell you my bathroom habits, and you really don’t want to know anyway.) It’s tough to resist the sweet song of the mobile siren. But resist we must. If we don’t establish office etiquette for our phones, we may find them banned from the workplace.

And then it’s back to fax machines.

And you don’t want that, do you?

Check out the SAPPHIRE NOW keynote from Hasso Plattner