Tom Brady’s DeflateGate Might Appeal to the Internet of Things

As NFL football fans await the outcome of Tom Brady’s appeal of a four-game suspension for his involvement in DeflateGate, a teaching moment should be explored to protect the sanctity of the NFL — and more specifically, continuous monitoring of balls used during NFL games. 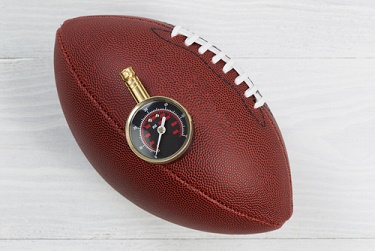 Earlier this year, Sports Illustrated published, How Officials Check Ball Pressure, designed to release some of the hot air surrounding the DeflateGate scandal swirling the New England Patriots and the NFL. While it’s an enlightening, behind-the-scenes look at how NFL officials monitor ball pressure throughout the game, allow me to call “time out” with this one passage:

The balls would be in the officials’ possession until just minutes before the start of the game, at which point they would hand to ball boys on each side of the field. For balls to be tampered with, it would most likely have to take place on the field during the game.

Since most NFL games take a few hours to complete, that’s obviously a very big lapse in ball monitoring to say the least. But is it too big of a lapse to bother monitoring or one that would interfere with gameplay?

Let’s consider a few modern-day examples where this type of continuous monitoring, via The Internet of Things, is already at work preventing global catastrophes, accidents and every day annoyances.

Tires are an obvious example as most of us have tire pressure monitor systems in our cars to let us know when pressure is low. According to How Stuff Works, “sensors within the tire, or on the car, send information to one or several modules in the car. These modules are programmed with a range of acceptable circumstances.” Couldn’t small sensors be placed inside NFL game balls with the ability to send continuous pressure updates to officials?

Hazardous work environments like mining, ports and construction currently benefit from anti-collision software. If something happens to a crane operator, for instance, sensors can alert co-workers on the ground and also divert a potential accident by taking over the controls. Is this another possible solution to help NFL teams keep a close eye on equipment and players during games?

Hopefully, the media firestorm surrounding Brady’s Deflategate appeal won’t distract from this teaching moment; that technology can help protect the sanctity of the NFL in an effective and unobtrusive manner. Heck, if we can create fake elephant tusks pimped out with GPS sensors to elude poachers and terrorists, surely we can make this ball monitoring thing work?

How SAP Engages Millions of NFL Fans with Fantasy Football, HANA and Lumira