hosted by SAP CTO, Quentin Clark, was a huge success based on the great turn out alone.

It is so exciting to know that SAP and its employees will have such a great opportinity to help make Super Bowl 50 the largest Super Bowl yet! software which helps coaches analyze player stats, I am thrilled to see that we will also have the opportinity to show the world how dedicated and supportive SAP employees are by helping make this a positive experience for people travelling in from around the world.  There are extensive plans in place to make this not only the most technolgically advanced Super Bowl, but also the greatest in philanthropic work.  Learning how we might be able to win some highly coveted tickets to the most public event of the world was an added plus!

I was happy to learn that Super Bowl City will be accessible to the local population the weekend before the Super Bowl, allowing us to bring our families before the out-of-town crowds arrive in San Francisco. What an awesome gesture! During the event, there was a raffle in which a couple lucky employees won a San Francisco 49er helmet autographed by the one and only, Ricky Watters.  It was a perfect way to start football season and kick-off SAP’s involvement in Super Bowl 50!

Well, I’m off to learn the basics of how to 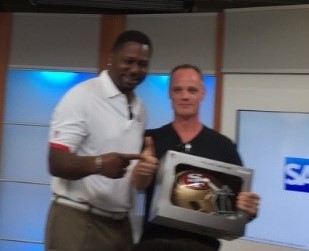 play the NFL’s Fantasy Football powered by SAP HANA, as I want a chance at winning those Super Bowl tickets!  Now, where do I find that nifty NFL Fantasy Player Comparison Tool these sports fans were raving about….

Thank you for sharing your experience at this event, Dinora! Best of luck with Fantasty Football!

Great recap Dinora! I will be looking out for you in the fantasy draft! Great idea to use the player comparison tool =)