To buffer or not to buffer a database table?

This blog post attempts to answer the above questions.

This blog post is divided into 3 sections and structured as follows:

❗ You might find the blog to be slightly lengthy but the content will NOT be more than what you can chew. Trust me! 😀

Section 1: Prerequisites (Recap of Table Buffering Fundamentals and its Mechanism)

Buffering is the processing of storing table data (which is always present in the database) temporarily in the RAM of the Application Server. Buffering is specified in the technical settings of a table’s definition in the DDIC.

The benefits of buffering are:

The buffering mechanism can be visualized in Figure 1 below: 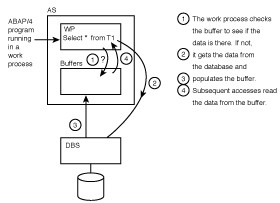 The SAP work processes of an application server have access to the SAP table buffer. The buffers are loaded on demand via the database connection. If a SELECT statement is executed on a table selected for buffering, the SAP work process initially looks up the desired data in the SAP table buffer. If the data is not available in the buffer, it is loaded from the database, stored in the table buffer, and then copied to the ABAP program (in the internal session). Subsequent accesses to this table would fetch the data from the buffer and the query need not go to the database to fetch it.

It must be understood that RAM space in the application server is limited. Let’s say – dbtab1 is a buffered table whose data is present in the buffer. When there is a query on another buffered table – dbtab2, its data will have to be loaded into the buffer. This might result in the data of dbtab1 getting displaced from the buffer.

Buffering a table that gets updated very frequently might actually end up increasing the load on the DB and increasing the network traffic between the application layer and the database. This would slow down the system performance and defeat the purpose of buffering.

Section 2: How to use the Table Call Statistics Transaction

This is accessed by the Tcode – ST10. The following is the initial screen: 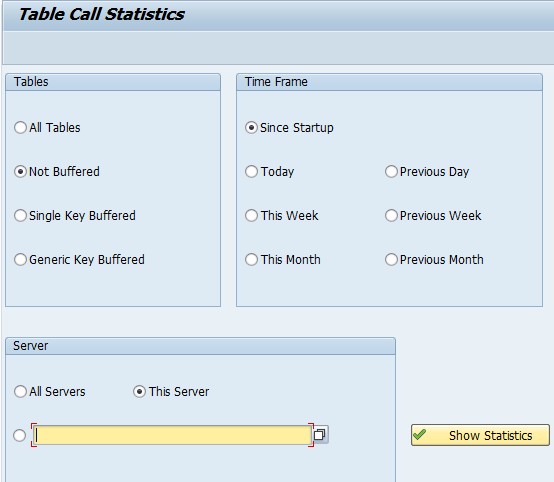 A few points may be noted in Figure 2:

Let’s explore the results returned by the transaction when the radiobutton – “Not Buffered” is chosen.

Figure 3: Results of ST10 when the radio buttons – “Non-Buffered”, “This Server” and “From startup” are chosen

Let me explain the significance of each column –

Let’s explore the results when the radio button – “Generic Key Buffered” is chosen:

Figure 4: Results of ST10 when the radio buttons – “Generic Key Buffered”, “This Server” and “From startup” are chosen

There are some new columns here, which were not present in Figure 3. They are:

(b)     ABSENT – The table has not been accessed yet. So the table buffer is not yet loaded with data.

(c)     DISPLACED – The table buffer has been displaced

(e)     ERROR – The table content could not be placed in the buffer, because insufficient space.

(f)      LOADABLE – The table buffer in the buffer area is invalid, but can be loaded in the next access.

(g)     MULTIPLE – Relevant only in the context of Generic Area Buffered Tables. These have different buffer statuses.

NOTE: All the table buffers in the current application server can be cleared by entering the Tcode- “/$TAB”.

Note that the user can toggle between one result set and another by using the buttons in the Application Toolbar (as shown in Figure 5):

Figure 5: Application Toolbar of the primary list screen of ST10. 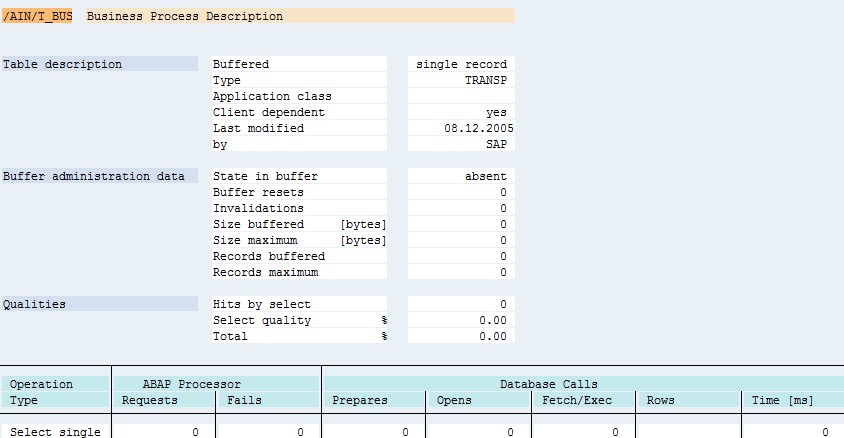 Section 3: Interpreting the results of the Table Call Statistics Transaction to answer the questions posed above.

How to determine a non-buffered table which is suited to be buffered?

If it is to be buffered, what should be its buffering type?

How to determine the efficiency of the buffer setting of already buffered tables?

NOTE: Ensure that the time frame for which the transaction is run is significant enough such that all the reports/applications were run in that period and all business scenarios occurred in that period. Only then, can this transaction guide us effectively in deciding which table’s buffer settings are to be altered.

Based on the above guidelines, let’s consider some examples in Figure 7, which shows the Non-Buffered Tables:

I would like to draw your attention to the 3 tables enclosed by a green rectangle. Based on the trends for these three tables, it can be temporarily concluded that:

The above points are not the final decisions but just guidelines. Other aspects like data volume, size category, access frequency etc are to be considered.

How can an ABAP developer, know whether a buffered table actually exists in the buffer, at a given time instant?

Figure 9: Buffer State of TSTC table after the above code snippet is run

Figure 10: ST05-SQL Trace when the above code snippet is run for the first time. Data is fetched from database.

Figure 11: ST05-Buffer Trace when the above code snippet is run for the second time. Data is fetched from buffer.

ST10 is a very useful transaction that can guide you in answering the following questions:

Thanks for your well definitions. It's really helpfull on all aspects of buffering analysis.

Also I have a question. Do we gain anything buffering a table which has zero record and of course any change but it has millions sequential read?

Before I address your specific question, I would like to draw the attention to some basic concepts.

So marking a table as single record buffering is useful when it is known that there would be repeated sequential reads for a record that does NOT exist also. [Reference].

Coming to your question, if that empty table (which I assume will be populated sometime), is going to be queried/searched for the SAME records (which do NOT exist) repeatedly, then maybe the table can be single record buffered.

I made a simple testing with a Z-table for compare buffering totally blank table. I have created a million loop to read and write result of table. I see it tooks almost 15sec if we don't fully buffer. Then i changed it to fully buffered. It tooks 0sec. Yes zero seconds to complete all readings.

I also record a single item to table. Then i made same testing. Same result occurs. So as a conclusion i can say even it's a blank table buffering has 10 times faster result if you have lot's of reads on table.

Thanks for sharing the info.

"the query need NOT go to the DB to know that this record does not exist. It will just look in the buffer area".

Thanks for your definitions. It’s really helpful 🙂

I have One question,  for example one table in database 13Mb when data buffered in RAM is 13Mb or reduce?

It's super explanation. One of the best explanation seen on the web on this topic particularly. A lot of doubt got clear. Thanks for posting such a wonderful article.

when we enable the buffer and whenever the first query in program runs on that database buffer is filled(i.e. valid ) . This point I understood. But when anything changed in that table then again on the subsequent select query the buffer is synced with table. This also I understood.

But I want to know is there any job or any technique which is used by DB administrator to sync the table record and buffer or it's automatically start syncing.

Kindly throw light on this topic.