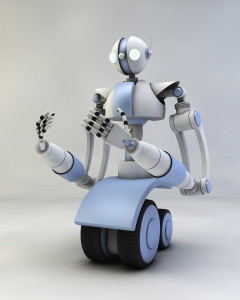 Fascination—and fear of—the interplay between man and machine is as old as industrialization itself, from Isaac Asimov’s three laws of robotics creating a quasi code of ethics for our potentially menacing mechanized counterparts to director James Cameron’s cinematic series featuring cyborg assassin and an ongoing battle between humanity and a race of robot warriors.

Self-actualized automatons and an impending robo-pocalypse certainly make for great science fiction. And in an era in which we define our lives largely by the work that we do, concerns about the impact of a fully mechanized workforce are understandable.

But while the quickly advancing fields of automation and artificial intelligence will most certainly revolutionize every aspect of human life—and are already making an impact on everything from military strategy to medical procedures—the future of robotics doesn’t have to be a dystopian one. Rather, as robots take over increasingly complex tasks, new forms of man-machine interaction will emerge and the structure of both industry and society will evolve to accommodate this emerging and symbiotic relationship.

Already used for everything from fighting wars to cleaning floors, robots are poised to invade the personal and consumer space in the near future. A number of trends are converging that will advance the robotics field over the next 15 to 20 years and put it virtually light-years ahead of the likes of Fritz Lang’s steely-eyed machine-human in Metropolis.

Together, these trends will spur a new form of robotics technologies—flexible, sensory, tactile, intelligent, and interactive—with capabilities far beyond what we envision today. The result will be a wide assortment of new robot forms and applications.

A lack of imagination

Robots are already augmenting the human workforce in a number of areas. After all, they excel in crunching numbers, lifting heavy objects, working in dangerous environments, moving with precision, and performing repetitive tasks. This leads to the natural concern that we will be replaced by robots  for nearly all human endeavors, resulting in a “labor-light” economy in which most work is automated and people take what little is left.

But such a prediction is based on last-century thinking. A wave of emerging technologies is already turning the industrial revolution on its head. Robots won’t simply replace workers on the assembly line. In fact there won’t be many classical assembly lines with centralized factories anymore. 3D printing and the Maker Movement will change all that.

Also disconcerting is a Terminator-esque scenario in which humanoid robots take over the globe. In reality, however, it’s anyone’s guess whether mankind could actually either invent—or enable—that level of artificial intelligence.

Instead of either scenario a different future is more probable, and likely more profitable, for everyone.

Humans still have a number of advantages over their automated counterparts, including creativity, curiosity, empathy, self-motivation, and the ability to provide fast, multidimensional feedback. And by working hand-in-hand with advanced robotics technology, we can combine the best of man and machine.

Thanks to this symbiosis, we’ll be able to take on challenging adventures like colonizing our oceans or space travel in ways that neither man nor machine can accomplish alone. Artificial extensions of the human form, such as suits or exoskeletons that strengthen arms and legs, night vision, and other sensory enhancements will be commonplace.

The rise of man-machine collaboration

Today, medicine is at the forefront of man-machine advancement. Researchers at New York University and the Florida Institute for Human and Machine Cognition are developing lower-extremity exoskeletons for the disabled. At the University of California, Berkeley, robotics experts are testing a similar device designed to help parapalegics walk. Harvard’s Wyss Institute for Biologically Inspired Engineering is working on a fabric “exosuit” that works to “reduce injuries, improve stamina, and enhance balance even for [people] with weakened muscles.”

Another example is the U.S. military, which is tapping industry to develop a special outfit for commandos. Dubbed the “Iron Man” suit, it could include “super-human strength, sensors that respond directly to brain functions, and liquid armor,” according to The Washington Post. A team of researchers at Harvard University have created a prototype for a “smart suit“ that makes its wearer faster, more agile, and better able to move heavy objects. A device called Tacit helps the visually impaired actually feel objects around them. Attached to the wrist, it uses ultrasound waves to scan the surrounding area and delivers pressure to the wearer when objects get too close. A German programmer has invented a way to pilot a camera-mounted drone by using just his head.

There’s no denying that advances in robotics and artificial intelligence will displace some jobs performed by humans today. But for every repetitive job that is lost to automation, it’s likely that more than one interesting, creative job will take its place – a job that only a human can do. As the authors of a recent report by the Pew Research Center point out: “[A]dvances in technology may displace certain types of work, but historically they have been a net creator of jobs.”

Enterprises must explore how they can best bring together the creativity and experience of their human workforce with the advanced capabilities of automation and artificial intelligence. Here are some ways to get started:

Rather than fearing either the arrival of robot overlords or the mass loss of jobs, companies should start thinking about how they might incorporate man-machine collaboration to innovate, spur growth, and invent entire new categories of work.

This article has been published first on the Digitalist Magazine To learn more about how exponential technology will affect business and life, go to SAP Digital Futures.