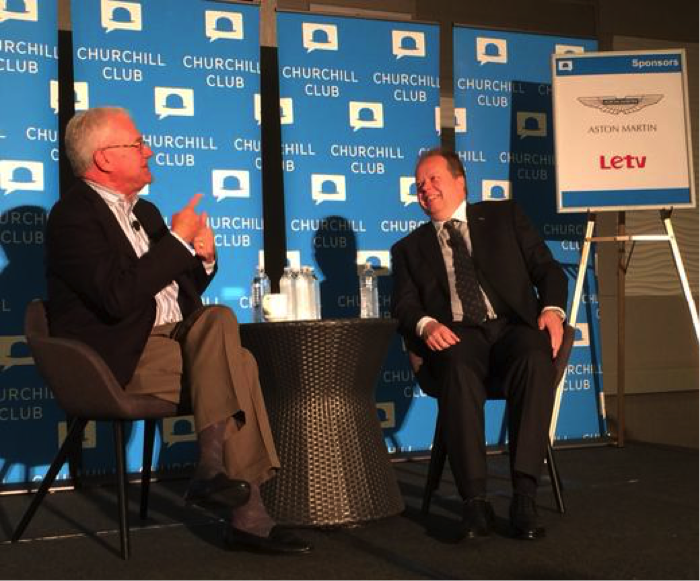 During the Monterey Automotive Week, Aston Martin CEO Andy Palmer sat down with Geoffrey Moore (of Crossing the Chasm fame) for a candid discussion.  The talk was held at the Churchill Club. Palmer gave insights into the future of the century-old automaker.

Aston Martin is a luxury goods company.  It aims to be compared to Hermes rather than big auto. Many of its private equity investors come from the oil-rich nation Kuwait.  Andy Palmer hopes his investors will agree with positioning Aston Martin as a company with a high enterprise multiple.  According to Yahoo Finance, Hermes’ enterprise multiple is 21. Traditional automakers have much lower multiples.  (Volkswagen 7.4; General Motors 6.0; Fiat Chrysler 3.2, etc).  If the Hermes comparison holds true, then the growth potential of the luxury automotive segment far exceeds that of cheaper options.

Yet, it is a supply and demand game. Scarcity protects demand.  Palmer concedes that, “There always needs to be one more customer than there are cars [available].”

To survive, Aston Martin needs to grow sales to emerging markets and women.  The automaker has a plan to do just that.  As BRICs become bigger buying centers, luxury goods makers like Aston Martin will benefit from the high elasticity of demand. Yet to appeal to female buyers, targeting the right persona might just make all the difference.

At the moment Aston Martin has four models. However, they are adding new models, expanding to reach new segments within the broad spectrum of high net-worth individuals. Perhaps the most innovative new segment is aimed at females (and shorter males).  Historically cars have been designed to ergonomically fit tall men.  The 99th percentile American male is over six feet tall.  Yet, the majority of people are not that tall. The average American female is only 5 feet 4 inches tall.   The average height of a Chinese male is around 5 feet 5 inches.

Aston Martin knows that women are supporting and influencing the men who ultimately buy the cars.   What they don’t know is why women aren’t buying the cars themselves.  The company is taking steps to collect female opinion.  For example, Aston Martin has created a female advisory board.  There, use cases unique to females, such as how driving in high heels affects using pedals, are explored. 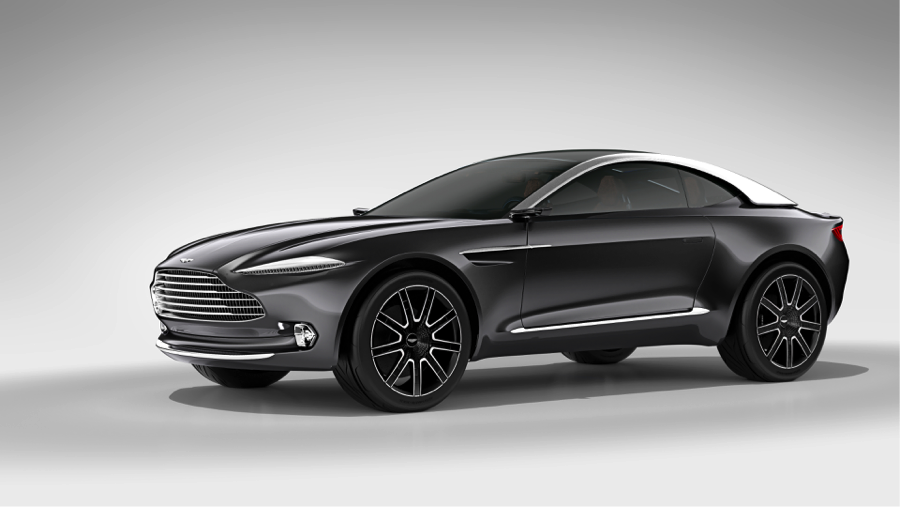 As a result of this and other research, Aston Martin has developed a uniquely female target persona for their upcoming DBX model. Her name is Charlotte.  “Charlotte” describes a woman in her early 40s, who lives in California, is successful, and wants to reward herself.   She’ll join other personas such as “Richard” a proxy for the Vanquish model, “Marcus” a German proxy for the Vantage model, and “Philip” a French proxy for the DB9 model.

As unique as the DBX styling will be, it will still be clearly an Aston Martin.  At a glance, Charlotte’s DBX will have the distinctive Aston Martin grill.  It will likely have the unique handcrafted styling that sets Aston Martins apart.  As Andy Palmer said, “Aston Martin is not about demonstrating your midlife crisis. It’s a statement of maturity.  It’s when you are inwardly satisfied with yourself.  [You tell yourself] I’m buying a piece of handcrafted British heritage.” 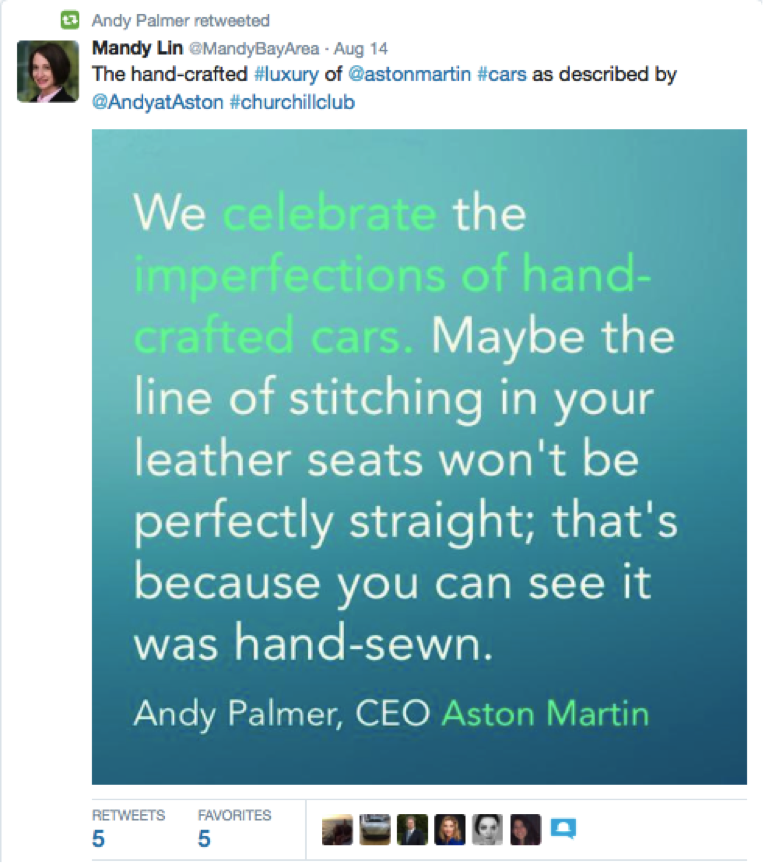 During the Churchill event, Palmer said that Aston Martin is the “antidote for the Apple watch.  We are analog.  We are like fine Swiss watches.  But I think there is a place for a fine Swiss watch on one hand and an Apple watch on the other.”  Yet, according to Car and Driver, the DBX previewed at the 2015 Geneva show was electrically powered.

Can the ‘silence’ of an electric vehicle compete with the iconic sound of V-8 and V-12 engines? It needs to.  For Aston Martin to survive they need to grow their new segments.  This will allow Aston Martin to preserve the exclusivity of their flagship sports cars.  Back in 1914, Lionel Martin raced a car up Aston Hill.  In 2015 another race is underway – to capture the heart of Charlotte, especially in key markets like California and the BRIC countries.  Will Aston Martin win financial stability with their segmentation and persona strategy?

Learn how to digitally transform your automotive business at the Best Practices for Automotive conference on October 12-14, 2015 in Detroit, Mi. Download the conference brochure now

Mandy, terrific article. It seems quite the trend these days, legendary car makers trying to reinvent themselves. We did a great case study on how Tata's shiny new toy, Jaguar-Land Rover, is doing the same thing. Please take a look.

Interesting case study!  Transferring production plant knowledge has been a challenge in the auto industry for a long time.  I remember reading case studies in b-school about Toyota along these lines.  I think that most auto manufacturers would have an easier time expanding production because of the hand-made nature of Aston Martins. Andy Palmer said there is currently only 1 robot in AM's factory.  Let's see how Jaguar-Land Rover does in their BRIC expansion.  There is never a dull moment in auto!