Typical MM/FI inconsistency: MM missing FI — Why and how to prevent it

As we all know if we post material document which is relevant to valuation, an FI document will be created subsequently.
A typical MM/FI inconsistency would be the material document is generally while the FI document is however missing.
If ML(material ledger) is activated system will issue error C+048 and no more goods movement is possible for the material.
In the worst situation, period closing activity will be affected and even causing auditing issue.
(This is the same content moved from Chinese forum as per quest from peers)

Here will give a detailed explanation, possible reason and the way to prevent it:

The important user-exit and BAdI

are the ones to be often used. If there’re inappropriate command(from note 92550) below implemented in the BAdI or user exit,

Here I’d like to introduce the concept of SAP LUW. LUW is “Unit Logical Unit of Work” and usually there’re
Database LUWs and SAP LUWs. SAP LUW is used to keep consistency of application programs that are executed

across different work processes, and the updates are first registered and then executed by a single work process.

One of the techniques is known as update task(via update function modules: CALL FUNCTION…IN UPDATE TASK).

BAdI MB_DOCUMENT_BADI is called after the update function module MB_UPDATE_TASK, so if there is COMMIT WORK 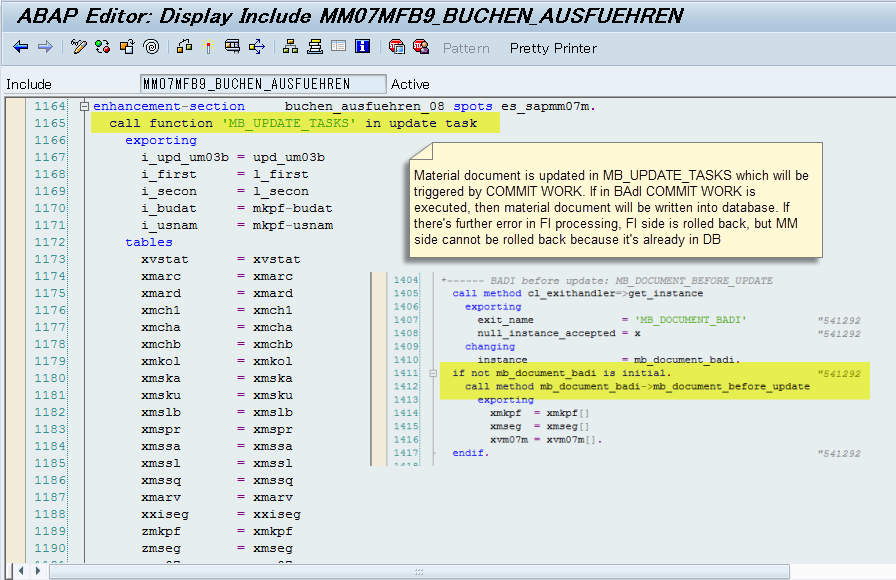 Call function ‘A’ in update task.

Call function ‘B’ in update task.

Call function ‘D’ in update task.
->If there’s any error happens at this stage, system can only rollback C and D while material document
cannot be rolled back any more as it has been already written into database.

You may still have concern, why the issue does not always happen. Sometimes twice or three times in a month?
As shown in above flow, you could understand it only happens when LUW is destroyed i.e. there’s error afterwards however
system can no longer roll back the whole transaction completely. If there’s no error then with 2 times of COMMT WORK,
you can still see both material document and FI document are created.

Call function ‘A’ in update task.

Call function ‘B’ in update task.

Standard COMMIT WORK is executed, and only FI document is updated into database

We’ve got lots of customer incidents reported with this kind of inconsistency. The correction can only be carried out
by SAP authorized engineer with debugging so we implement the checking mechanism in note 1776835

to prevent such inconsistency. This note implement the coding to catch and track the inappropriate COMMIT

or ROLLBACK in customer coding, and once it’s detected system throws short dump to terminate the process.
In transaction ST22 call stack, you can see in which user-exit or BAdI COMMIT/ROLLBACK is triggered, and then

you have to review the coding with your ABAPers and correct it accordingly. So we highly recommend you to
implement the note to prevent MM missing FI inconsistency. It’s always necessary that customer development obey
the rules and keep the completeness of SAP LUW.

SAP notes
Regarding the MM/FI inconsistency topic, you can also refer to SAP note below for details:

From the reported inconsistencies between FI and MM here in SCN I would say that 90% are based on direct account stock account postings made by Finance people, e.g. for depreciation of old stock value.

FI manual posting is one of main reasons. I've been correcting such inconsistency for more than 5 years...but still have customer report it because of the own coding...