SAP Mobile App Competition Kicks it Up a Notch!

SAP InnoJams are known in the programming community for their intense schedule and amazingly fast learning curve, but the most recent InnoJam hosted by SAP University Alliances, the SAP Mobile App Competition, challenged students on an entirely new level and the results were incredible!

The InnoJam took place at SAP SE Headquarters in Walldorf, Germany on the 11-13th of August and had all of the classic elements that have made SAP InnoJams so popular among students as well as a few new twists to spice things up. The Mobile App Competition hosted six student teams, with competitors from over nine different countries. However, the students were not alone in the competition because for the first time ever, they competed alongside startups and even current SAP employees. Thus, the event was a joint endeavor between SAP University Alliances and SAP Business Innovation & IT.

The atmosphere in the room was absolutely electric as the competitors gathered to hear the welcome speech from Carsten Linz, the Innovation Officer from the SAP CIO Engagement & Innovation Incubation team. Dr. Linz compared the Mobile App competition to the Olympics, and in that moment, you could really see the burning desire to win in the eyes of each programming athlete, be they student, startup, or employee.

Following their official welcome, the participants went upstairs to check out their location for the next 32 hours of the competition. They were soon greeted by Florian Heretsch, who carefully explained that the primary goal of the competition was to create an app that would simplify and improve the work life within SAP. Florian then plunged the students into the creative world of Design Thinking. Design Thinking stretched the students’ minds by encouraging unconventional means of approaching the problem. One participant, Thomas Buckley, said that this phase of the competition was perhaps where he learned the most and that he thought design thinking was “like rocket-fuelled innovation.” After loads of interviews with SAP insiders and experts, mountains of colorful sticky notes, and 18 whiteboards crammed beyond capacity with new ideas, the students’ app ideas began to take shape.

After the first paper prototypes were presented, the students were treated to a special session with the SAP Tech Coaches, where they were given fast-paced instruction on how to use SAPUI5, as this would be crucial to the functioning success of their apps.

Shortly thereafter, it was all hands on keyboards as the coding phase began. Students and startups coded long into the night to ensure their apps were ready the next day at judging. Some bravely fought their fatigue with a RedBull in one hand and Coffee in the other, while others curled up on the beanbags for a short power-nap, and others still ended up somewhere in between as they lost the battle with their sleepiness and ended up snoozing on their still-glowing laptops. 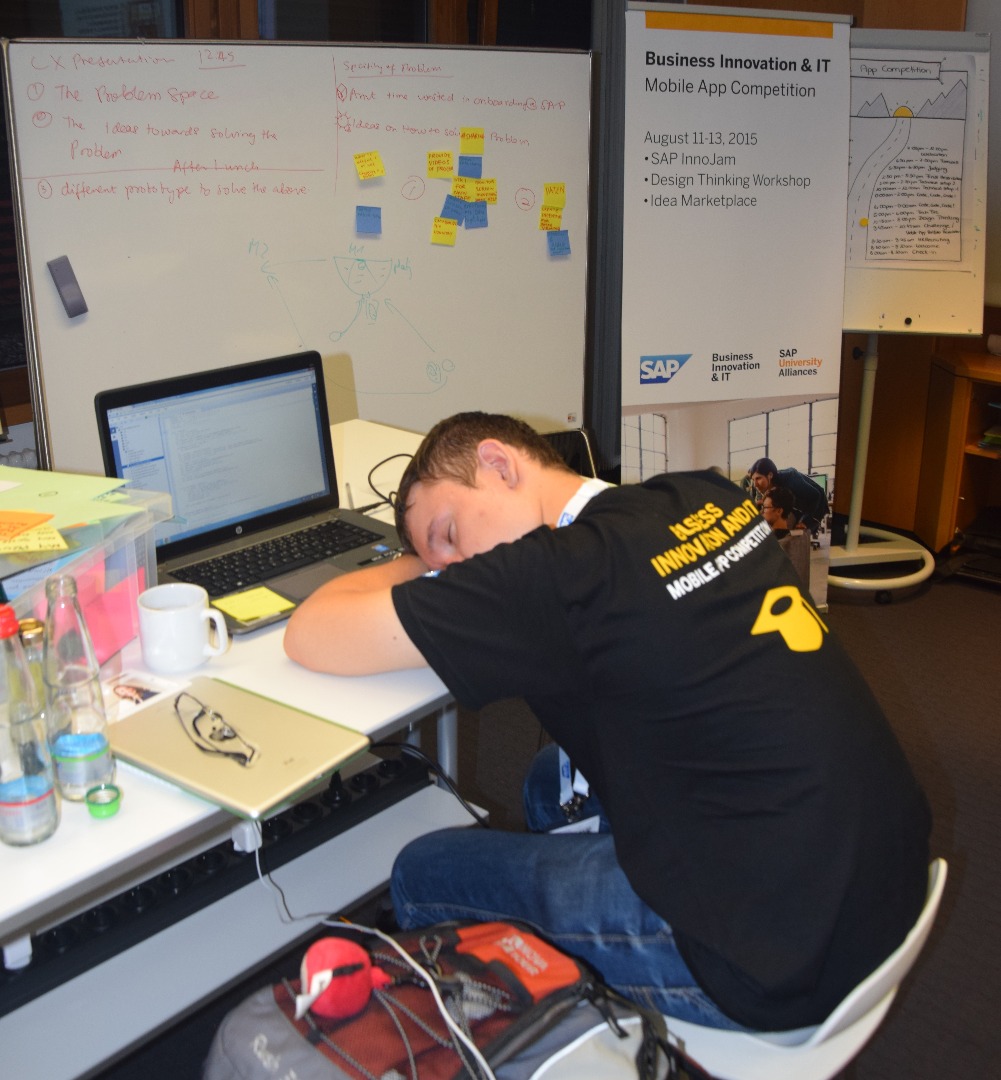 By early afternoon, everyone was ready to take a break from coding and get their blood pumping outside. A little tai chi in the sunlight seemed to work miracles for the group, and once again, they were eager to return to the laptops and put the final touches on their apps before they presented. Meanwhile, the competing employees began to trickle in and prepare for their presentations as well.

When the coding came to an end and the final presentation rolled around, there were smiles all around as each team was very proud of what they had created. As the group moved into the conference room, and the judges introduced themselves a palpable feeling of anticipation filled the room and absolute silence fell over the teams as they waited until it was their turn to show off what they had worked so hard on, live, in front of the judging panel.

All of the apps were amazing, especially since they were produced in just one hectic night of coding, but in the end, three student apps impressed the judges enough to earn their place at the SAP Idea Marketplace the following day. The three finalist teams were:

–John Omesili and Alexey Karetnikov with their app “SAP Onboard”

After the judging was announced, the congratulations were given and the celebration atmosphere reached an all time high, as the party moved to the rooftop to celebrate new knowledge, new friendships, and all that had been accomplished over the course of the InnoJam. Once among the beaming faces of everyone on the 6th floor, you would never have guessed that the majority of the group had not slept a wink the night before! The party lasted deep into the night and the students, startups, employees, and even the staff mingled and chatted together like old friends. It just goes to show that the old saying “nothing brings people together like a good party” is completely true, and everybody knows “there ain’t no party like a SAP party!” 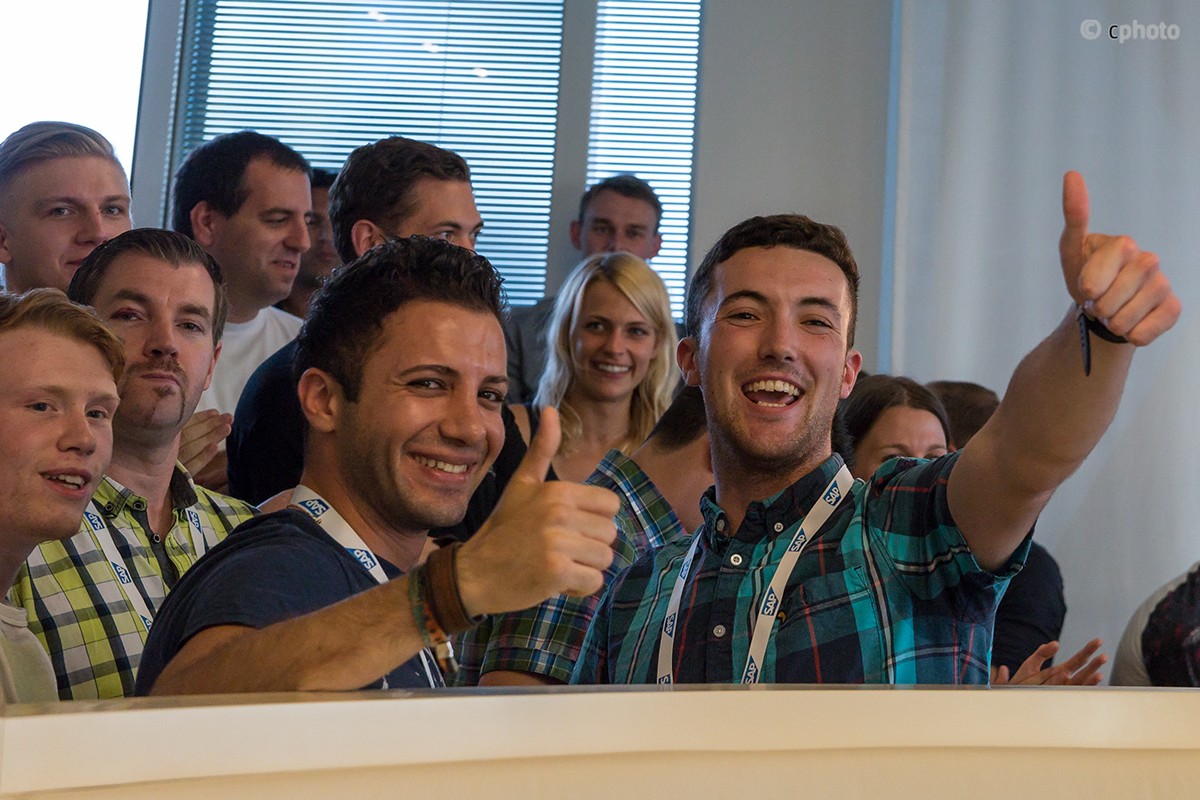 When the groups arrived again at SAP the next morning they looked refreshed and rejuvenated from finally getting a night’s rest at the hotel. Everyone dutifully went about setting up their booths to proudly display their apps. After the party the night before, a real sense of unity and comradery hung in the air for the entire  day as the top 3 teams from each track demonstrated their apps to interested passersby, only taking a break to chow down on some delicious German spätzle and curry wurst.

At last, the moment that everyone had been waiting for had arrived: the final announcement of the winners! Ingrid-Helen Arnold, CIO of SAP Business Innovation and IT and one of SAP’s board members, was there to give out the awards personally as the crowd and the SAP news team looked on in anticipation.

All of the student-created apps were amazing, but one team really went above and beyond to produce an app tailored to the SAP environment, and for their innovation Ayman Helou, Hariharan Gandhi, and Eric McEvoy were awarded first place for their app  “SAP Meeting Room Finder.” As the winners of the SAP Mobile App Competition, Eric, Ayman, and Hariharan each received a ticket to attend the TechEd Conference in Barcelona this year and to compete in the all-star InnoJam there! We are so very proud of all of the student teams that competed and we loved the fresh enthusiasm that the students brought with them to Walldorf, but like all good things, the SAP Mobile App Competition had come to an end. As Carsten Linz closed the event with the final words of each Olympic games, there was a feeling that we had truly come full circle. Every participant had been on his or her own journey of creativity and innovation but as the last words were said, we all stood smiling at the finish line together, because at the end of an SAP InnoJam, everyone is a winner.