The HCP IoT services were started in early May, it was still in beta version when we competed in IoT Fair, and gained some experience in it, we had a couple of ideas, initially and then IoT Chef came  along and gave us a perfect platform to show case and build the Kid’s Safety Band. IoT chef fit perfectly for our requirements and time line, so we just submitted the idea for the Safety Band and waited for the result. Couple of days later we got a confirmation mail informing us that the idea was selected in the top 30 out of 127 ideas submitted. We were quite excited and only until later that it dawned us that none of us had any actual experience in building an IoT prototype. Thus began the journey of learning the new IoT services from the scratch.

We procured an Arduino, heartbeat sensor and a GSM shield to start off with, but first we had to learn how to interface these devices, now getting to the nitty-gritty of IoT, we first ran the Blink program on the Arduino and slowly moved up the heartbeat sensor. The data sheets of the sensors are always of great help, they usual contain detailed explanation of how the sensors work and give a whole lot of other information as operational voltage, what kind of input the sensor expects, what is the output, etc. Finally we were able to interface and getting a good reading from the heartbeat sensor, we also spent a whole day to just figure out and use the GSM shield with the Arduino.
Coming to our idea, we’ve seen how child abuses and harassment cases have been on the rise, we thought how could a parent ensure the safety of their kid, that’s when we thought of safety band, although many such bands exists, we wanted to go a step ahead and make it truly smart, for which we were measuring the vitals and giving the parent a live feed of the values along with the location of the kid, we monitored if the band was being worn first and when it was worn, then a push notification would be sent about this status to the parent,  a few things we programmed in the band was, if the temperature exceeded a set threshold, the parent would receive an notification immediately, similarly we kept the band features minimal, and the max the child could do was call/send an SMS or notification with the press of a single button. Then the parent could take a call if the emergency coming in was genuine or not based on the vitals, similarly a parent could trigger an emergency from their phone, in a case, where the kid was found to be leaving the play school at an odd time. 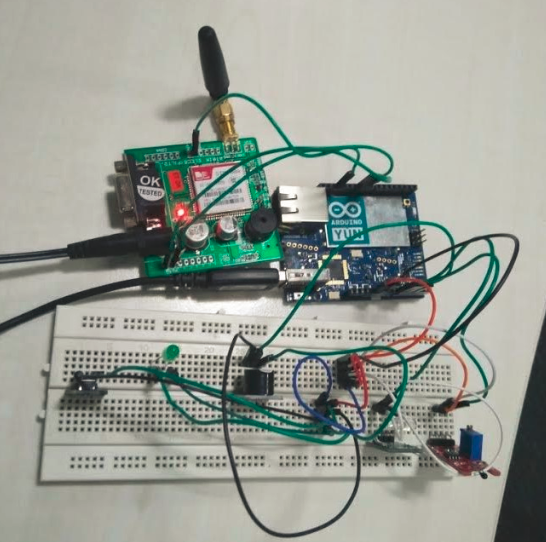 With this we managed to get into the semifinals of the IoT code chef, now we had to enhance our use case and that’s when we came up with the use case for the elderly as well, and changed the name to only Safety band. We broadened the scope to industry 4.0, where we wanted to have the chain of connected things, how did we achieve this?, we also got the hospital use case in it, an example for this would be, let’s say the vitals of an elderly person is very erratic or the heart rate is spiking, the elderly person can trigger an emergency again and the care taker can view all of this live data on the mobile phone, can take a decision and in turn trigger an emergency to a registered hospital. An emergency notification will pop up in the hospital dashboard, and they too, will start receiving the live updates from the band, and can immediately dispatch an ambulance using the geolocation from the band, meanwhile the doctor can look at the vitals and can be fully prepared for a treatment of the patient.

Another user case came from our customer the DHS, where they said most of the elderly suffer from Alzheimer’s, Amnesia, etc. and when these attacks occur quite often, and assuming the person wearing the band has had an attack, they exhibit a particular behavior i.e they either stand still or go sit/hide somewhere for very long period of time. So what we did was, track the geolocation of the band, and if it was found to be stationary for a very long time another notification would automatically would be triggered to the caretaker, and the caretaker would call back asking the elderly if she/he needed assistance.

We finally made it to first(final) 5 in the IoT code chef and presented our idea in the indoor cafeteria, it was an amazing experience showing the live data from the device on our mobile app, showing the actual location and emergency in the hospital dashboard, to packed house.

Future enhancements would include, trying to integrate insurance companies and drug companies, where let’s say, after the elderly has been discharged from the hospital, the medical expense and the report will directly sent to the insurance company for reimbursement and using the live data from the band the insurance company can validate the claim, similarly the prescription can be sent to a drug company, and wherever the elderly is low on medicine, can all order the prescribed medicine by a single push of button, which will place the order in the drug company, and the required medicine can be dispatched without any hassle to the elderly or the caretaker.

All this was achievable through HCP, IoT Services, Industry 4.0 and relentless coding of two days and nights, every aspect of this project was a new learning for us and went a long way it getting us familiarized with HCP and IoT services.