this “how-to” post is about defining authorizations and role handling.

All of them have in common, that there are SAP standard roles delivered.

The process is as follows:

The following roles are relevant for each of the scenarios described above:

In case of Gateway hub deployment, you have two users: one user in the SAP TM back-end system and one in the Gateway system. The roles with präfix /TMUI/ have to be assigned in the system in which the software component SAPTMUI is deployed.

To restrict the visibility of worksets for a specific user, proceed as follows:

The following table shows the relation between the workset folders and the worksets in the portal:

As the role /SCMTMS/COLL_PORTAL is the most complex one, the following step-by-step guide refers to this role. The steps have to be repeated for all relevant roles.

1. After a system upgrade you have to make sure that the newest authorization data is shown in the role. Therefore start transaction SU25 and execute at least step 2a.

6. In tab “Menu” provide your changes as described above for the visibility of worksets. 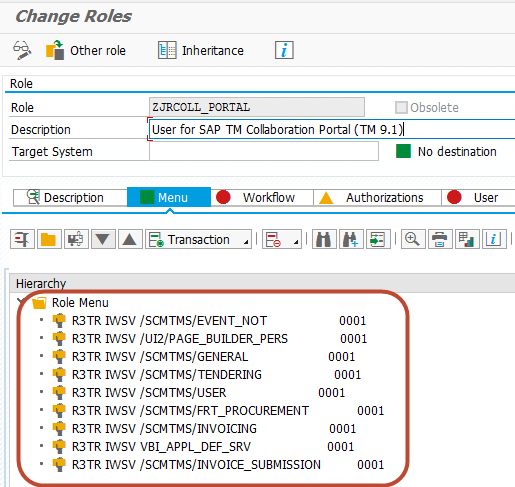 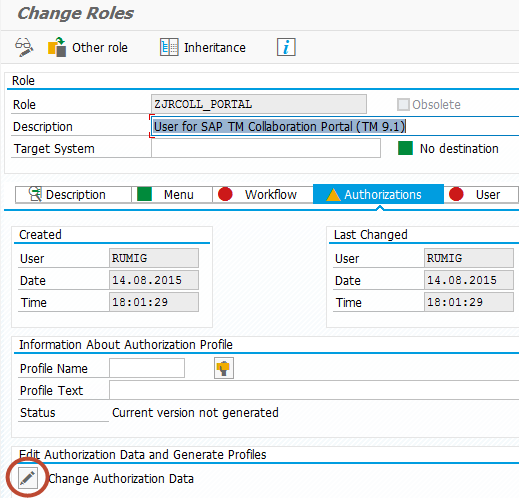 8. Maintain all authorization data, so that all the traffic lights get green. Afterwards click on “Generate”. 11. Open the user in transaction SU01 and assign the newly created roles there.

Please let me know your opinion.

Thanks Jan for a great post. It would be great if you can also add details about authorization for 2 back ends & 1 common portal.

What do you mean exactly? Gateway system separated from the SAP TM instance? There is not a big difference. If you check the role documentation which is referenced above, there you will find the information which role to apply in which system. In addition, the following sentence provides the necessary information: "In case of Gateway hub deployment, you have two users: one user in the SAP TM back-end system and one in the Gateway system. The roles with präfix /TMUI/ have to be assigned in the system in which the software component SAPTMUI is deployed."

I was asking about the details for "2 TM instances using 1 single (common) gateway instance."

The collaboration portal only works with 1 TM instance and 1 Gateway system at the same time. Your use case is special for your customer and won't be covered in this post.

i am getting error that sap tree menu not available.