HCM Needs to Wake up and Smell the Crayons: Unleashing Every Worker’s Inner Graffiti Artist 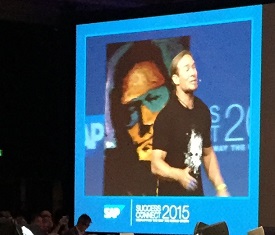 Break out the crayons, embrace the ethos of  American reality TV shows like “Fear Factor,” and let your imagination rule. Inside every employee is an incredibly creative graffiti artist — if only Human Resources is willing to help them break free from the shackles of corporate regimentation. Who better to understand the complex nuances of employee optimization and Human Capital Management (HCM) than a graffiti artist from Southern California? This was the question Erik Wahl posed to the audience of HR professionals I was sitting with during his guest speaker’s slot at the SuccessFactors 2015 event in Las Vegas this week.

The internationally recognized graffiti artist woke up the crowd with a challenge to reclaim their pre-school artistic capabilities, then took us on a keynote tour de force that was equal parts personal history, instant portraiture, audience participation and loads of fun.

Wahl described his rise from the ashes of the dot.com bust at the beginning of this century to reject regimented corporate life and rediscover his creative artistry. He urged everyone in HCM to jump start new opportunities by favoring people over process and encouraging post-breakfast daydreaming. Oh, and don’t forget to bring a large box of crayons.

“If you’re looking to streamline operational efficiencies and anticipate workforce trends, crayons can foster that environment of new, engaging, breakthrough ideas,” he said. “Crayons are in the Top 20 most recognized smells in the adult human experience. That smell alone has been proven to reduce blood pressure in adults by 10 points. So if you experience any particular frustration with the rapid pace of change moving to big data, employee optimization, the cloud, the push to do more and more with less, just pull out your box of crayons and take a drag.”

Wahl opened and closed his talk by frenetically drawing stylized renditions of Bono (at the beginning against a backdrop of U2’s video performance of “Beautiful Day”) and Einstein (at the close), to punctuate his points about the value of creativity. Throughout, he made a direct connection between the power of HR to reawaken the artist inside.

“Every child is an artist. The challenge is how to remain an artist once we grow up,” he said. “How do you retain that child-like ability to creativity solve problems but then ultimately come back into your adult life, your position as director of HR, amplifying your main talent to optimize the employee and engaged workforce a little bit differently going forward? You have to break outside of your comfort zone.”

To prove his point, Wahl sent a slight frisson of anxiety through the audience as he walked into the crowd to select a contestant for what he called his version of the television show, “Fear Factor.” In true game show style, he allowed the woman he initially chose at random to select someone else to participate, which she did. Taking that second woman on stage, he revealed his real purpose by gifting her the portrait of Bono he’d just drawn. The relief was palpable when he then announced he was giving $100 cash to the women he’d originally chosen.

As entertaining as Wahl’s performance was, he also shared a number of specific next steps for HR and any professional pursuing growth. I don’t have space here to recount them all, but here a three that resonated with me most:

Complacency will be the architecture of our downfall.

Step back from the day-to-day and look at the future of your company as if it were a blank canvas with limitless possibilities.

Wahl believes Albert Einstein understood HR best when the latter coined the phrase, “Imagination is more important than knowledge.” To be sure, data-driven knowledge is absolutely necessary. But I also agree with Wahl that HR is an art. Engaging the workforce means re-igniting HR’s artistry as a conductor of the workforce, especially to simplify complexity. It’s about making space for people to use their crayons for drawing outside the lines, so they think like no one’s ever thought before. Only then can companies experience the real power of creativity.

Great story Susan. Thanks for capturing the moment so vividly for all to read and experience.