Many customers running SAP on IBM i are using the file system QFileSvr.400 to share common directories, such as the transport directory /usr/sap/trans across multiple logical partitions or servers (hosts) in a distributed system landscape. By default, all requests from a remote host are processed by a single server process named QPWFSERSO on the server side, i.e. on the host where the directory physically resides. If multiple processes on the client side accessed the server through QFileSvr.400 at the same time, all requests were processed sequentially, which could lead to noticeable delays on the client side.

Beginning with IBM i 7.2, QFileSvr.400 may be configured so that a separate server process is started for each client request. This increases the data transfer rate significantly when running multiple transports in parallel. In order to use the feature, only the client side (i.e. the host where the link is specified as /QFileSvr.400/<host>/…) needs to be at IBM i 7.2. The server side (i.e. the host where the data physically resides) can be at any currently supported IBM i release. For IBM i 7.2, the PTFs SI53624, SI53633 and SI54535 must be applied (licensed program: 5770SS1).

You can activate the multi-threaded feature of QFileSvr.400 by setting the environment variable QIBM_RFS_CONNECTION_POLICY to a value of 1 for all processes that access links through QFileSvr.400 with the following operating system command:

If you plan to use this feature and want to access these directories through Windows shares as well, you must choose one of the following two options in order to avoid problems in the Windows clients:

The documentation of this new feature can also be found in SAP Note 2202005. 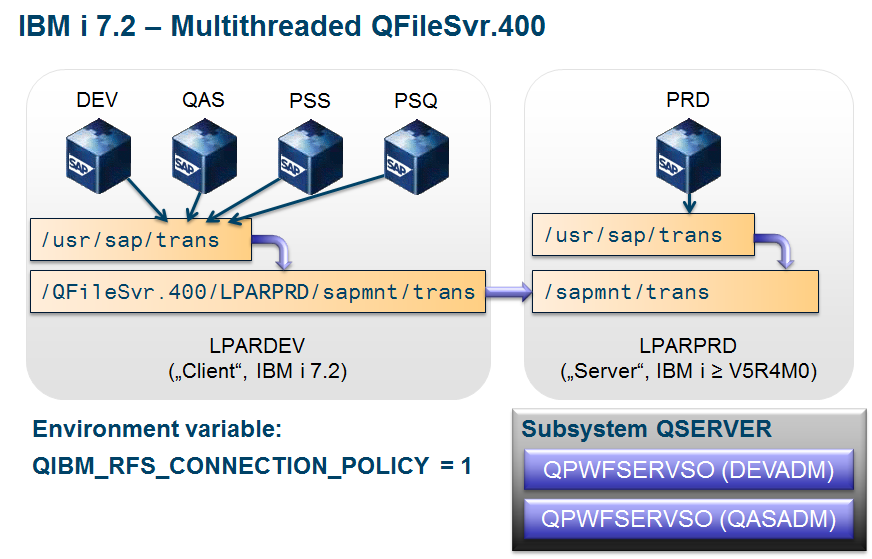