Quotes on Saying No

Over the years, I’ve compiled multiple lists of quotes about performance management, technology, and failure. Lately I’ve been thinking about prioritization and how to deal with the unending requests for my time. As I blogged about last year, I’ve had some luck using Tim Ferriss’ advice on 9 habits we all should stop — although I admit it’s still hard to say ‘no’ to people.

For inspiration, I decided to create a list of quotes on prioritization and saying no:

“What you don’t do determines what you can do.”
Tim Ferriss, author (source)

“Half of the troubles of this life can be traced to saying yes too quickly and not saying no soon enough.”
Josh Billings, pen name of humorist Henry Wheeler Shaw (unverified)

“We need to learn the slow ‘yes’ and the quick ‘no.’”
Tom Friel, former CEO of Heidrick & Struggles (source)

“The art of leadership is saying no, not saying yes. It is very easy to say yes.”
Tony Blair, politician (source)

And, for even more inspiration, one from Steve Jobs:
“Focusing is about saying no.”

Anyone have other quotes to add?

This blog was originally posted on Manage by Walking Around on August 9, 2015. 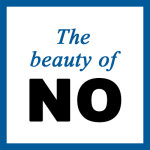 There is so much truth in this! Thank you for bringing this on a page.