In the past few weeks, SAP Silicon Valley has provided me the opportunity to hear from a variety of personalities. First, I was captured by traveler and author Pico Iyer, as he delivered insights into the Art of Stillness. Next, during the SAP North America All-Hands, former NFL Hall of Fame QB, Steve Young, had us all intently listening to his personal journey of overcoming his shortcoming (his height just over six feet vs. average height of NFL players at 6’4”). This week, I hosted the SAP and Women’s Tennis Association (WTA) partnership event in Palo Alto, which featured star tennis player Karolina Pliskova, tennis coach Miles MacLagan, and Jenni Lewis, Technology Lead for SAP Global Sponsorships. The event was attended by more than 120 SAP employees who joined us for an exclusive, first-hand demo of SAP Tennis Analytics, powered by SAP HANA. 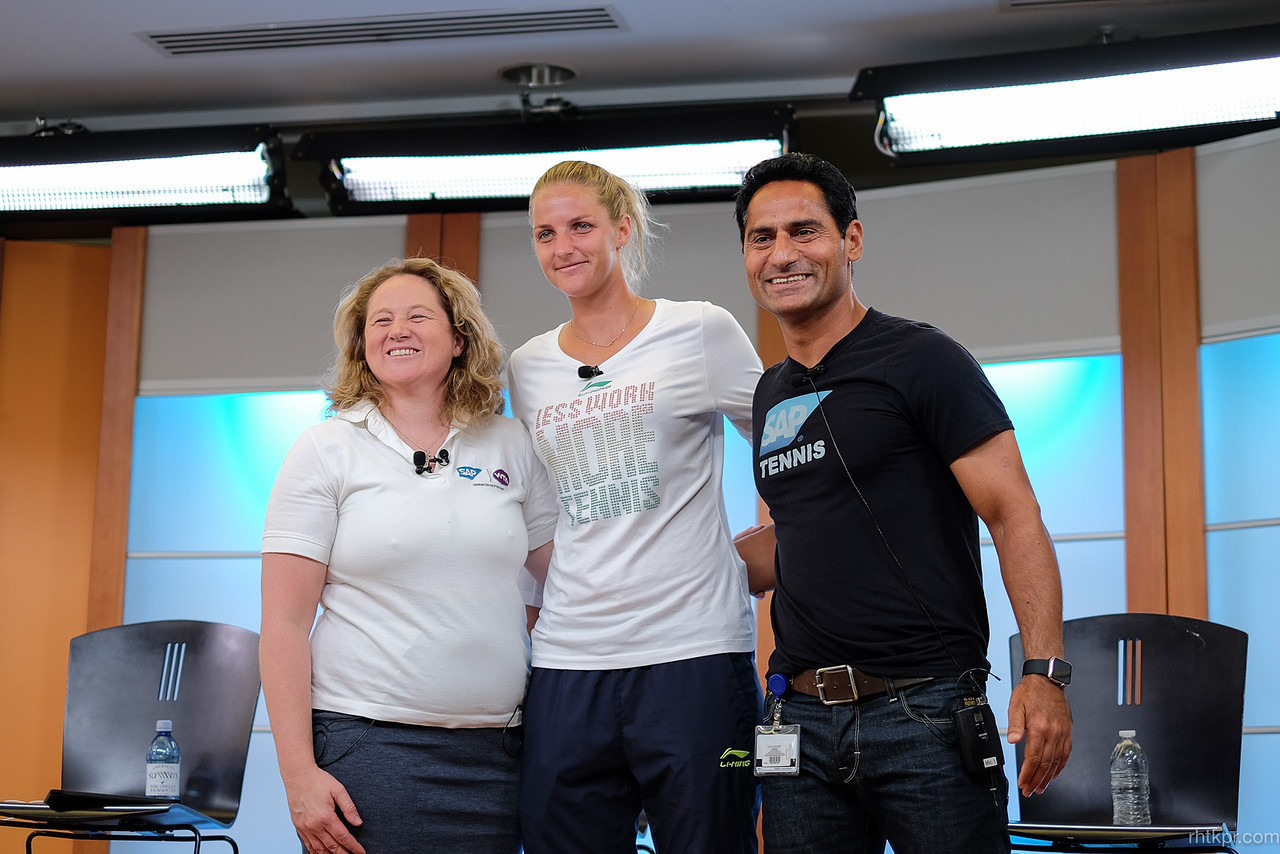 As a passionate, semi-obsessed, tennis player and member of the tennis club at SAP, I was honored to host this event. Growing up as a fan of the game, I am still reduced to tears when Federer loses a close match, and I jump with joy when Serena wins another Grand Slam. What do these two great players have in common? Both of them are supposedly past their primes, but they continue to surprise sports pundits. How do they do it? I believe it’s a combination of the abilities of self, inner self, technology, and continuous learning.

Let’s talk about “self.” This is about a player’s physical attributes, including speed, height, weight, disposition, style of play, movement, and mannerisms on and off the court. Physical attributes are a definite factor, but after listening to Steve Young and watching Federer (6’1”, Ranked No 2) play against Ivo Karlovic (6’10’’ Ranked No 22), it’s clear that there’s more involved in becoming great than being the biggest or strongest.

This brings me to “inner self.” In reality, Steve Young is just over six feet tall, his NFL stats records label him as 6’2”, but in his mind he is a towering 6’4” professional athlete. Steve identified his handicap (not being able to see the receivers over the heads of his tall defensive line) and devised a plan to overcome this hurdle. He figured that he didn’t necessarily have to see the receivers, but instead he could anticipate where the receiver was going to be and throw the ball blind.

Similarly, Federer is not among the physically strongest tennis players, but he has unbelievable confidence in his ability to win, which keeps him calm under extreme stress. This connects with the ideas Pico shared in his book Art of Stillness – finding a sense of contentment, reflection, and awareness at all times despite all the trappings of digital and material chatter.

Thus far, we talked about how you need to have strength, but not be the strongest, and how you need to have mental fortitude with a calm and focus. The third part to this trifecta is technology, which is revolutionizing players’ style, how they train, and how they are able to hit balls coming at 100 MPH with pinpoint accuracy.

I had the pleasure of learning how WTA and SAP are transforming the way players and coaches will interact with data from games. With the power of SAP HANA and Hawk-Eye–automated tennis line-calling technology–working in tandem, coaches and players can analyze shot placements, movement on the court, winner vs unforced errors, all in real-time while seated courtside. This revolutionary technology is called SAP Tennis Analytics, powered by SAP HANA.

WTA, a pioneer for allowing coaching between sets, could completely change the way courtside coaching is administered to players during match play. Instead of recording players’ data, coaches will have access to real-time data analysis. Coaches will be able to pinpoint patterns in their opponents shot placement, their weaknesses at that specific instance, and also glean holes in their opponent’s game that can be exploited.

Thus neither the strongest, nor the most composed player will be the champion, but instead it will be coaches and players who can leverage technology to improve their chances of success. To summarize, I see three pillars that are transforming the game of tennis.

As Malcom Gladwell shared in his book Outliers, talent is not an innate ability that we are born with, but is a combination of intense hard work (10,000hrs of practice – self), a sense of purpose (inner self), and access to best learning/technology. With increasing focus on fitness and mental training, the margin of error on the courts is going to be razor thin. Players and coaches who focus on purpose driven training using the best technology will be the ones who will create a legacy. I am glad that SAP is part of this transformation.