Who Could Be the Top Rugby World Cup Players in 2015?

This is the fist part of a three-blog story. Part 2 is here. Part 3 is there.

I spent two years in Africa and was given the chance to learn how to play rugby in an “international team” – easy as it was the only one across the country 😉 .

I was wondering if we can find out the reasons why a player can become a rugby all-star during the World Cup.

From the site here, I extracted the statistics for all the players that ever participated to a world cup.

The value of my target variable is 0 for a normal player, 1 for an all-star player.

My 50 all-star players originates from 9 countries, basically the Six Nations (Italy set apart) and the 4 nations. 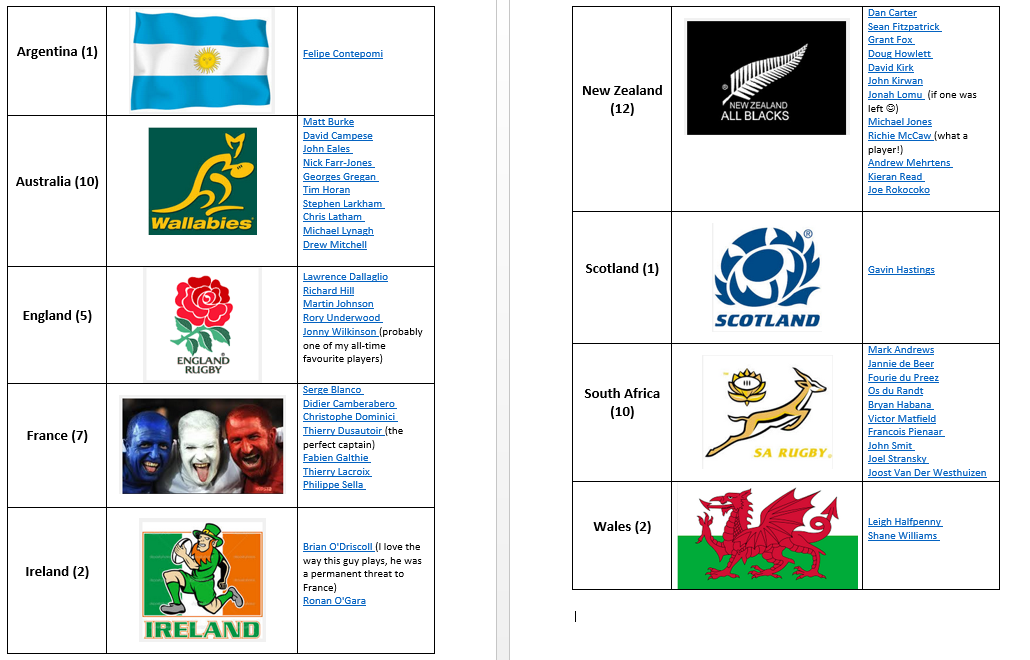 (Apologies to my colleague Pierpaolo VEZZOSI for not shortlisting Italian players 😕 )

This becomes a classification problem. I am going to see how the different input variables can help explain and predict the output variable. The full final dataset is attached to the post.

I open SAP Predictive Analytics 2.2, click on Modeler and Create a Classification/Regression Model. 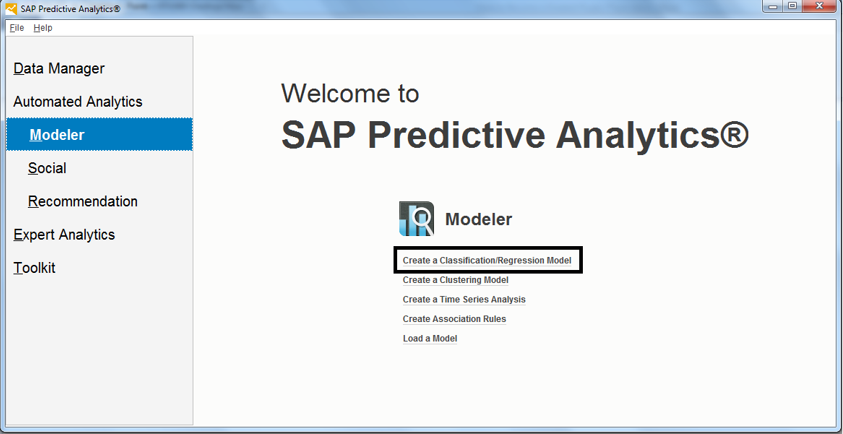 I load the Excel file containing all the players and their stats. 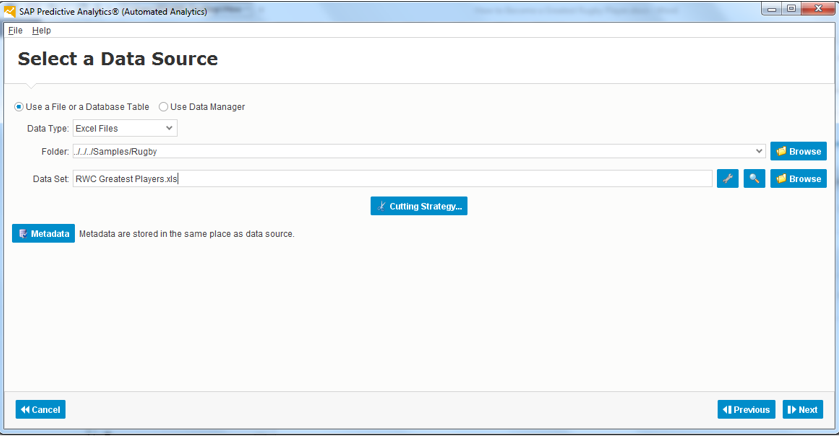 I need to describe the data. Here is the final screen, with all the information filled in (I attached the description file to the post).

I set the target variable and exclude the Player variable at it is not useful for the model. 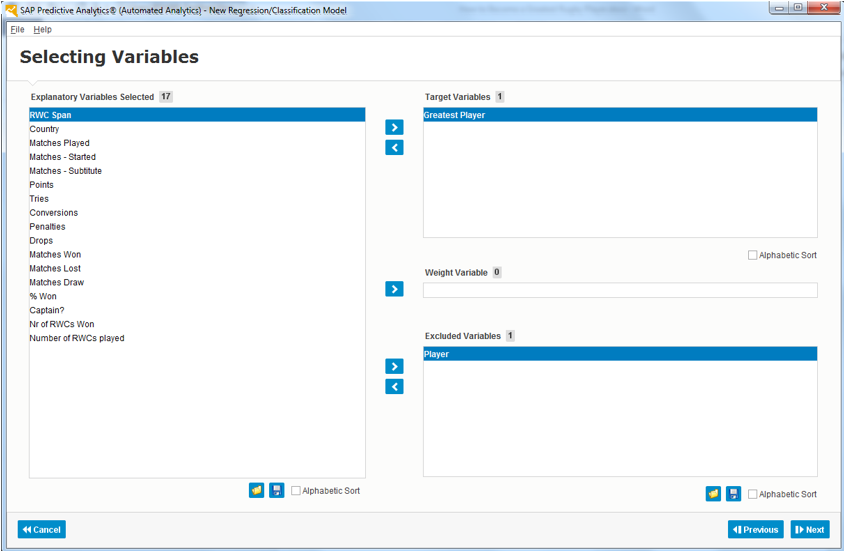 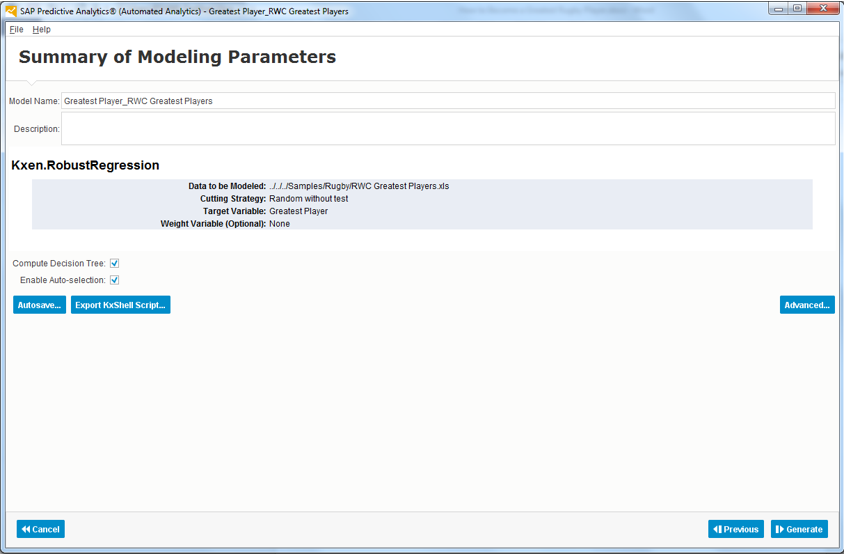 There is one suspicious variable Matches Won – as this is alone a very strong predictor of the output. SAP Predictive Analytics is warning us about the strong correlation between the input and the output variable.

The more you and your team win World Cup matches, the higher the chances are that you become a rugby legend. Makes sense, right? 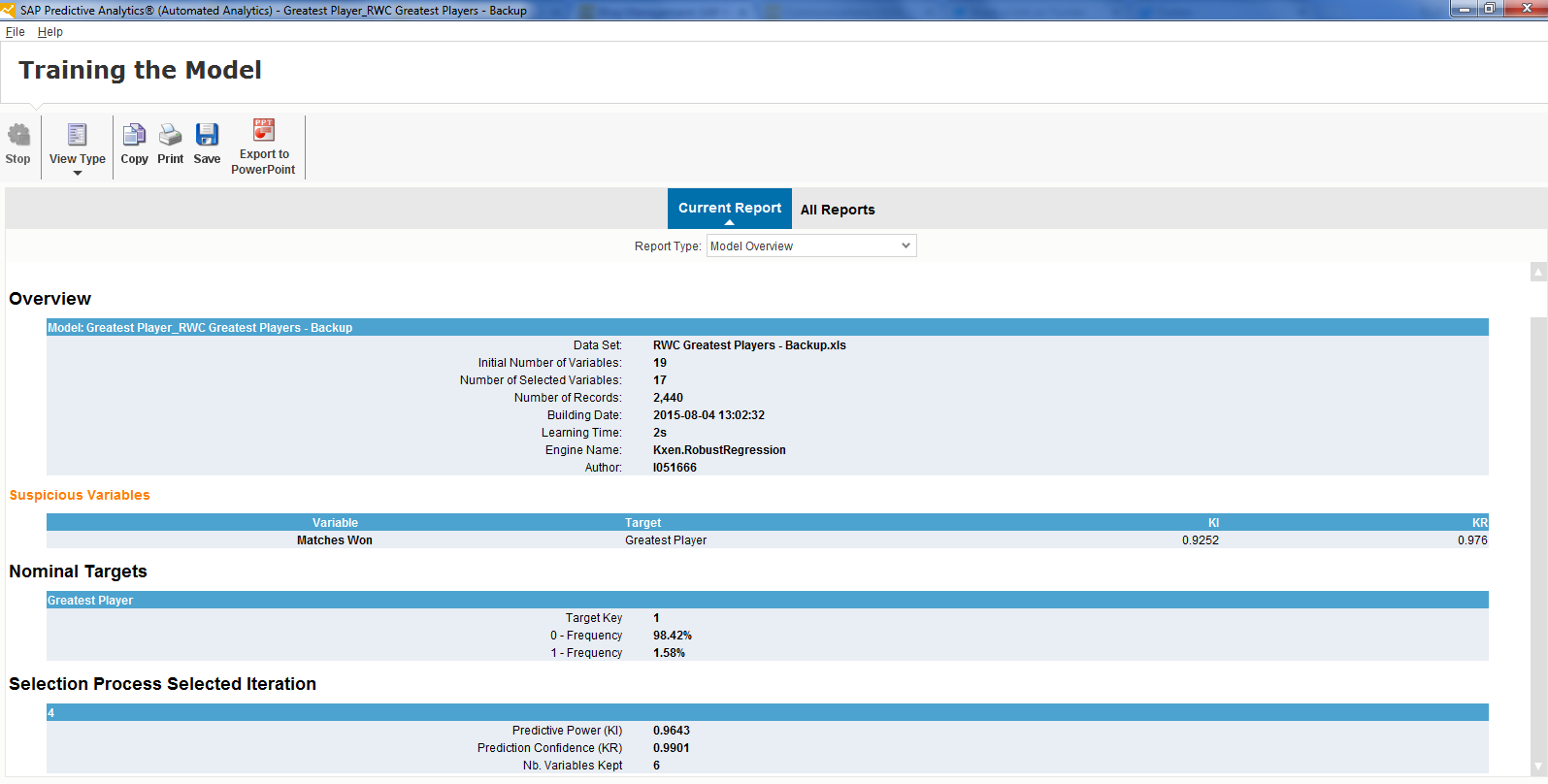 Let’s move to the variable contributions. 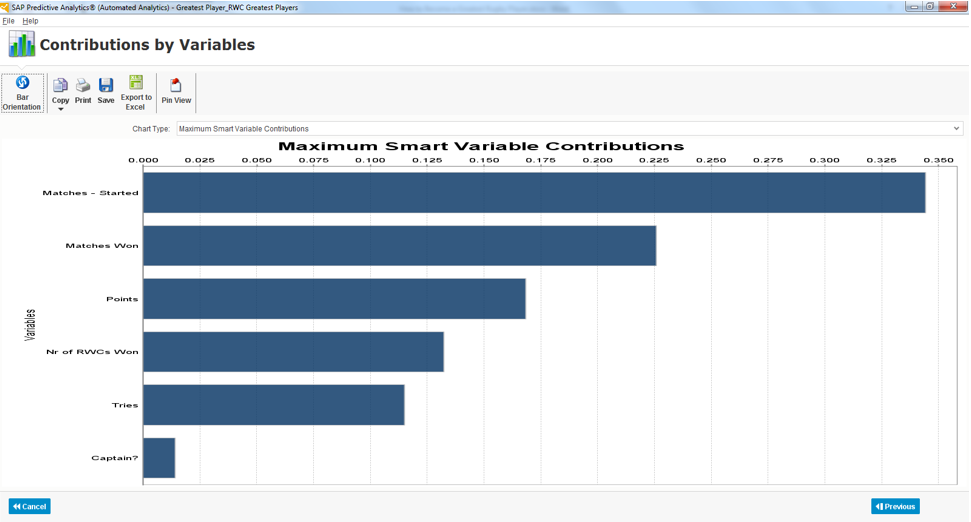 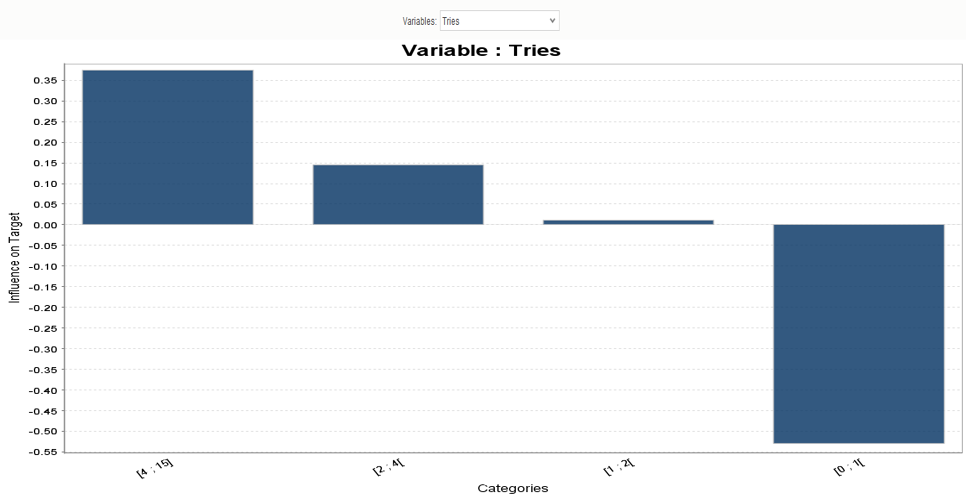 I move to the Decision Tree and use the two more important variables in my model. 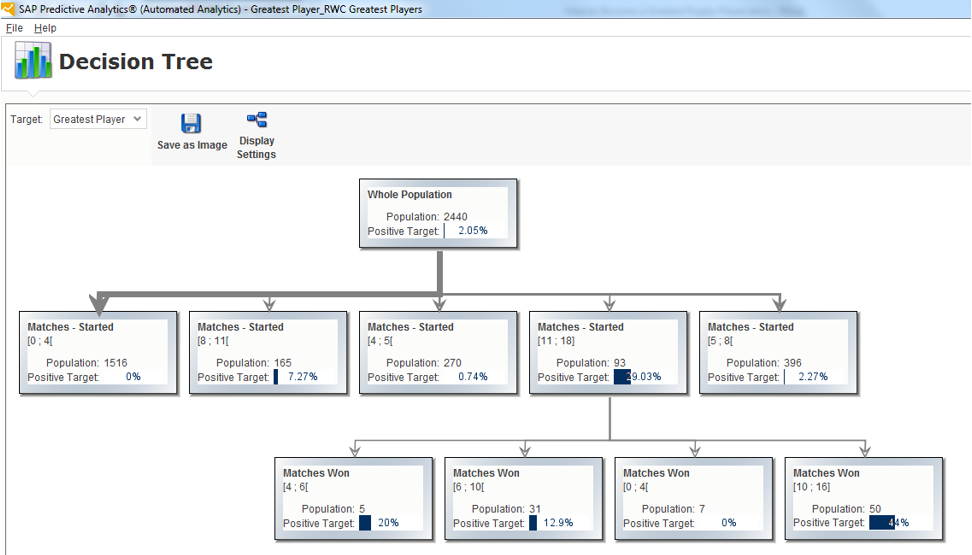 Here is my interpretation:

I will keep this first blog post short and leave the rest for the second part (teaser: it’s all about predictions 😉 ).

Thanks for reading! Your comments are welcome!

Very nice article! That's the only reason why you are forgiven for not adding Italian players 😉 (but we will review this after the World Cup)

Thanks Pierpaolo. My #1 pick for Italy would be Sergio Parisse, just type "best italian rugby player" in Google and you will see all its information.

The RWC is an example of where stats don't tell the whole story; for example, the first one was run in Australia and New Zealand in 1987 (won by the good guys, of course), but in Rugby terms the most notable thing was the absence of South Africa, due to the international sporting sanctions then in place. In fact, they also missed the 1991 World Cup, so South Africa (and South African players) have only played at four of the six Rugby World Cup tournaments.

Another issue is the selection of the statistics used, both the time frame (the RWC is "only" 2 months of a four cycle), and the types of statistics that appear to Front Row forwards (think Line backer) against Winger (think Wide Receiver). As a rabid All Blacks supporter, even though I live in Australia, I do have to note that their results in the World Cup very rarely match the expectations raised by the rugby played in the 46 months of the four year cycle.

And of course, there is the real reason for sporting statistics...

Even though there are specialist positions, (Rugby is justly famous for having a position for any body shape), overall, Rugby is a team game, so however great you are as a player, if you play for, say Italy, who have never progressed past the pool round, you would be hard pressed to make a claim as THE greatest player using the methodology. You need to include a statistic that measures the quintessential italianness of people like Sergio Parisse 😛

PS One of my favorite rugby videos, starring a teacher from my son's school.

Thanks for your comment, for retracing some of the RWC history and for sharing this impressive video!

Here are two videos I like, the first one to go back to some RWC finest moments, the second one just because I am French 🙂

Funnily, the RWC 1987 final you mention in your answer involves 8 of my all-time greatest players, 5 being from New-Zealand, 3 being from France.

As for statistics, here are some assumptions that I made when building this example:

- The players have to be present during at least one RWC edition. Bad luck for South African that was not part of RWC 1987/1991.

- The selection of greatest players is done according to my tastes (even if I managed to keep it strict and select only 7 French players out of 50 😉 ) . I think you are right that my perception of Sergio Parisse (and Italian players in general) is influenced by the overall performance of their team. The same might be true for Fiji or other teams that are not part of the major rugby nations.I integrated a country variable though inside the dataset, interesting to see it's not coming out in the final model as a relevant one.

- No information about the positions was integrated in the dataset mostly because I was missing them from the dataset source and in just one day to work, I would have had a hard time integrating this information by-hand on the 2440  rows. But this could be a nice addition.

Thanks again, so what are your predictions:

- for the team that will be winning the RWC this year? (All Blacks, right?)

- for the greatest players that will reveal or confirm this year?

(BTW, it seems the official Twitter for RWC is asking to vote in order build a "RWC dream team". See https://twitter.com/rugbyworldcup)