The core functionality in SAP GRC is Risk and Impact Analysis which will help the organizations to achieve their motto “GET CLEAN and STAY CLEAN”. During one of the implementations I am working for we noticed lot of issues/bugs with the risk analysis functionality and based on our findings decided to write a blog which can be useful for others to consider below scenarios during implementation 🙂

First enable configuration parameter 1072 – Mitigation of critical risk required before approving the request as YES. This is applicable for both Critical Action and Critical Permission Risks.

Once this entry is deleted, kindly execute the scenario again. Now the Approver cannot approve the request if risks are not mitigated. This was the purpose of un-checking the Task Setting ‘Approve Despite Risks’, so that risks that are not mitigated, do not get approved.

Note: If maintaining the BRF+ Rules then it is necessary to maintain the entry in SPRO.

When a user account is locked or expired and when the same user try to create an access request then Risk Analysis/Impact Analysis will not return any results and this is as per design.

We identified few issues where users already have some roles assigned to their user accounts and now when they raise new requests with the roles which conflict with the existing roles or the roles requested in the request itself have violations but since users are LOCKED or EXPIRED risk analysis didn’t return any violations.

We identified during our weekly risk analysis report that few users have SOD conflicts with the roles assigned to them and up on investigation this is the issue with LOCKED or EXPIRED users.

We enabled the below configuration to fix our issue 🙂

One User Request Per System

Risk analysis functionality has one limitation in access requests but SAP addressed it with One User Request Per System functionality.

Now we have defined a rule in the system that “Approve Purchase Request and Release Blocked Invoices” as a HIGH SOD risk violation. But a smart user can raise two GRC access requests as below:

But once both the requests get approved, user will get access to the roles which have HIGH risk violations. This issue can be addressed in different ways:

1. Role Owners should take the responsibility when approving the roles to verify whether user really require access to that role,but system wise it will not stop them from approving these requests.

2. Enabling the risk analysis as MANDATORY before approving the request at last stage of approval so that if one request is first approved and user got the role 1, at least request 2 now shows the violations when risk analysis is run again before approving, but still if both the requests approved at the same time then still this option will not stop the user getting access to these conflicting roles.

To address this issue, SAP has given an option in the configuration which allows the users to raise ONE USER REQUEST PER SYSTEM at a given time. So, the users cannot raise a second request when there is a pending request for the same system which will help to address the issue mentioned above.

Since these days most of the customers of GRC having business roles we have identified this configuration having issues with the way it is working for business roles. We are able to get it fixed by SAP and enabled the below configuration in our system which has helped to address kind of issues discussed above 🙂

In EUP configuration, you can enable below option as One User per Request per System is part of the end-user personalization customizing so it is mainly based on the screen elements on the request.

Also implement below note to fix One User per Request per System EUP configuration issue with Business Roles.

2168444 UAM: One request per system not working correctly with business role and for IDM

There is a button called SIMULATION in access request creation/approval screen. Actually risk analysis in ARQ will perform both Risk Analysis and Impact Analysis for the user and SIMULATION button also gives the same option.

2. At approval stage you can see the risk violations under RISK VIOLATIONS tab

3. Now change the approval status for the role causing violations to REJECT and then click on SIMULATION button and run risk analysis and click on APPLY button in Simulation screen.

4. Now all violations will be removed from the request. Now again change back the role approval status to APPROVE and then click on SIMULATION button and without running risk analysis and click on APPLY button from SIMULATION screen.

5. System doesn’t prompt to run risk analysis and violations are wiped out 😯

We haven’t reported this issue to SAP but since this button access can be controlled using risk analysis authorization objects, we have removed this button access to our Users and Approvers from Request Submission and Request Approval Screens.

In order to hide the SIMULATION button from the Access Request creation screen, remove the following permission from the role:

We have identified a different risk analysis behavior during business role removal.

Below are the sequence of events:

With the above steps we confirmed that during business role removal risk analysis behavior is incorrect. We have raised this to SAP and working with SAP to get it fixed.

We have setup the configuration in such a way that no unmitigated access can be provision to the user in our production system.

All seems to be working fine however we found one scenario where approvers managed to bypass the risk violations and managed to approve the requests despite having violations in the request. 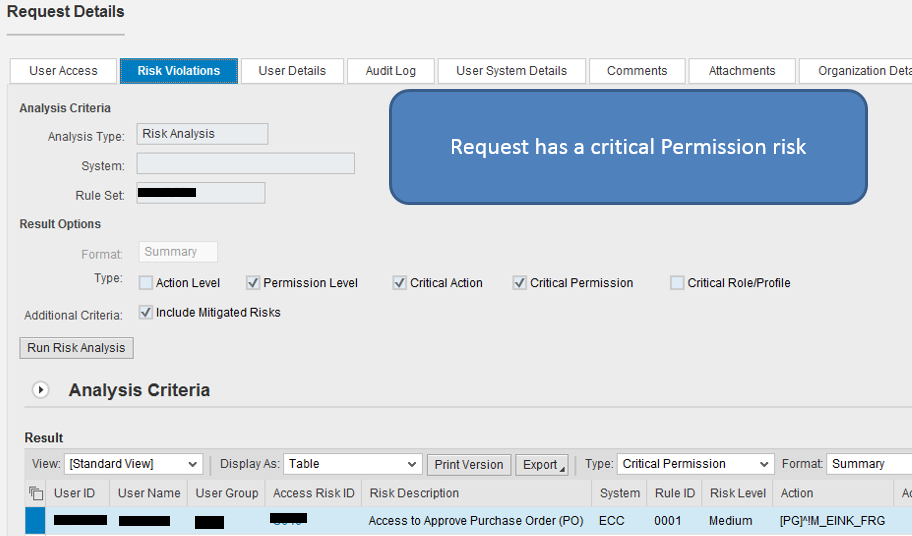 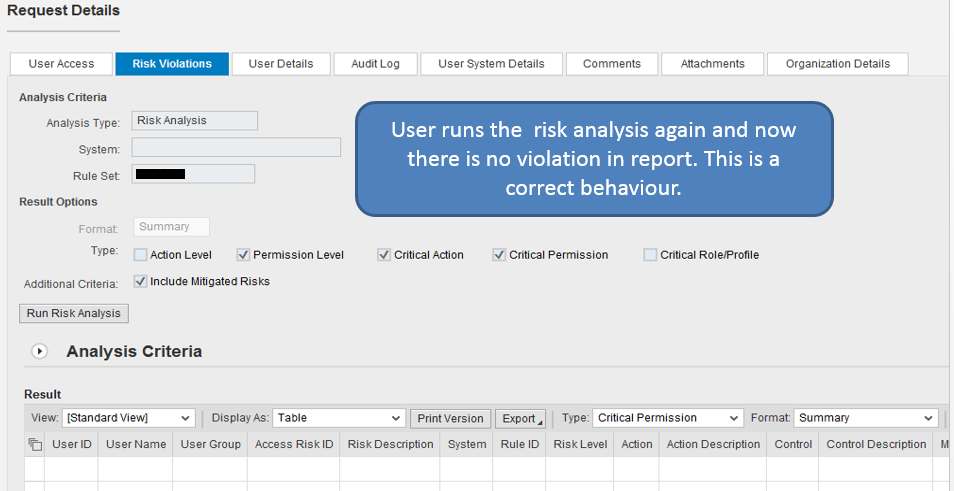 This is a product bug where if you close the browser it doesn’t save the approval status change however save the risk analysis result based on the approval status. SAP has acknowledged this issue as bug and are providing the fix 🙂 I will update this blog with the fix details once we get it 🙂

SOD violations are removed after re-running the risk analysis

1. Risk Analysis – To make sure that the role being created/modified don’t have any SOD violations.

2. Impact Analysis – To make sure that the role being created/modified doesn’t create any SOD violations for the users already assigned to it or the Composite/Business roles using it.

BRM User Impact analysis report shows the user level violations even though the assigned role validity is expired for the user.

In general, Risk/Impact analysis doesn’t consider validity dates of the roles, but if Impact Analysis report gives the report with expired roles for the user then they are FALSE POSITIVES.

BRM Role Change and ARQ Request at the same time

This issue is one of the product limitation 🙂 So, I wanted to understand from other consultants as well on how they are handling this scenario

1. Role Management Team is modifying a role using BRM in Development. As part of BRM process role changes are made and Risk/Impact analysis is done.

3. Now assume that there is a pending Access Request for the same role being modified through BRM and the user in the access request will get SOD violations because of  BRM role change but since the request is not yet completed and role is not yet assigned user will not be shown in Impact analysis report.

4. After Risk/Impact analysis phase in BRM there is certain time gap to finish approval and transport process and if the pending access requests with that role are approved during this time users will get that role but users will be shown in Risk analysis report after transporting the role modified through BRM.

So, there is a chance for risk violations to pass through because of this BRM role change and ARQ pending requests for the same role during that time.

Thanks Madhu for providing great insights, please update the tags so that easily understand the topic aslo.

As Always a great post madhu.....learning many tips and tricks...keep posting the same.

Thank you very much Madhu...no words for your generosity..hats off.

Mitigation Policy Configuration Doubt: i created decision table for Mitigation Policy, but i can still approve requests having SOD risks. Also, i noticed that the button 'Import test data' is greyed out in Start Simulation, option.

Again one of great the document from you Madhu.

Thanks for your feedback 🙂

BRM Role Change and ARQ Request at the same time

and informing to approver about the role changes before they approve

Sometimes if they approve mistakenly/unknowingly,then we are updating business role assignment manually to users and running risk analysis at user level,if risk occurs,informing to SOX team to mitigate at user level.

What version are you seeing these issues in?

All the reported issues are in GRC 10.1

My user doesn't have activity 70 for GRAC_RA, but the simulation button is displayed.

It does have activity 16, but wouldn't I remove the access to run risk analysis altogether if I remove that activity as well?

did you manage to get a response from SAP regarding issue "Risk Violations bypassed at Approver Stage" ?

We got a reply from SAP on the issue Risk Violations bypassed at Approver Stage. They have provided SAP Note 2468149.

Any update on Risk violations are not shown due to the roles not being generated . If you have could you please update here . This is one of the major requirement for my client .