Over the past six months we have been hard at work designing and developing a brand new supportability platform for SAP BusinessObjects BI Platform.  This product is the SAP BI Platform Support Tool version 2.0 which is an evolution and follow up of the original BI Platform Support Tool version 1.  Over 2014, we collected feedback from engineers, developers, and customers and implemented as much as possible into the new platform.  I believe with the new version, we will significantly reduce the number of incidents needed, reduce the amount of work for the BI administrator, and considerably reduce the time it takes to resolve support incidents raised to SAP support.

In this article, I will share the release schedule and provide details on all of the confirmed features coming soon in the version 2.0 release.

The home view now in version 2.0 is a BI supportability dashboard that brings together all of the resources that a BI administrator needs to support their BI Platform environments.  It is essentially a browser that displays useful SCN RSS feeds, hyperlinks to important maintenance, patching, and documentation, as well as a knowledge base search feature that searches KB Articles, SAP Notes, BOB Forum, and Google Search all simultaneously from a single query.  Once you have logged on using your S-USER account, the S-USER SSO certificate is stored within the BI Platform Support Tool client providing you a quick way to access important support content. 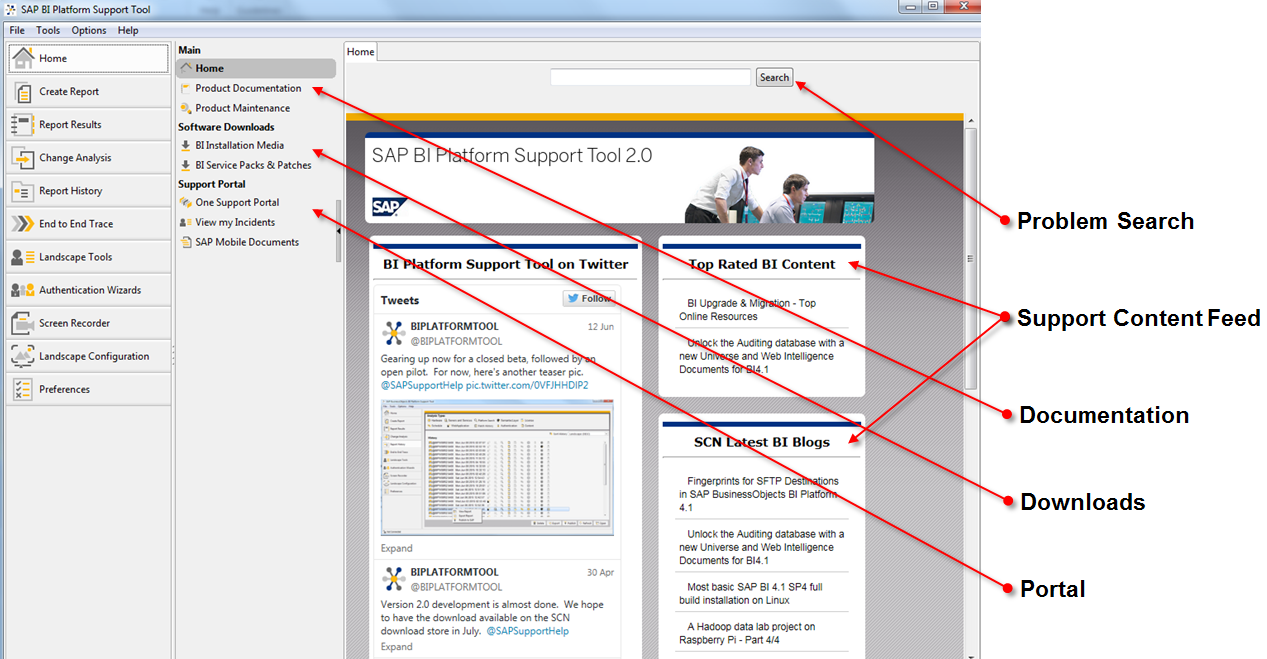 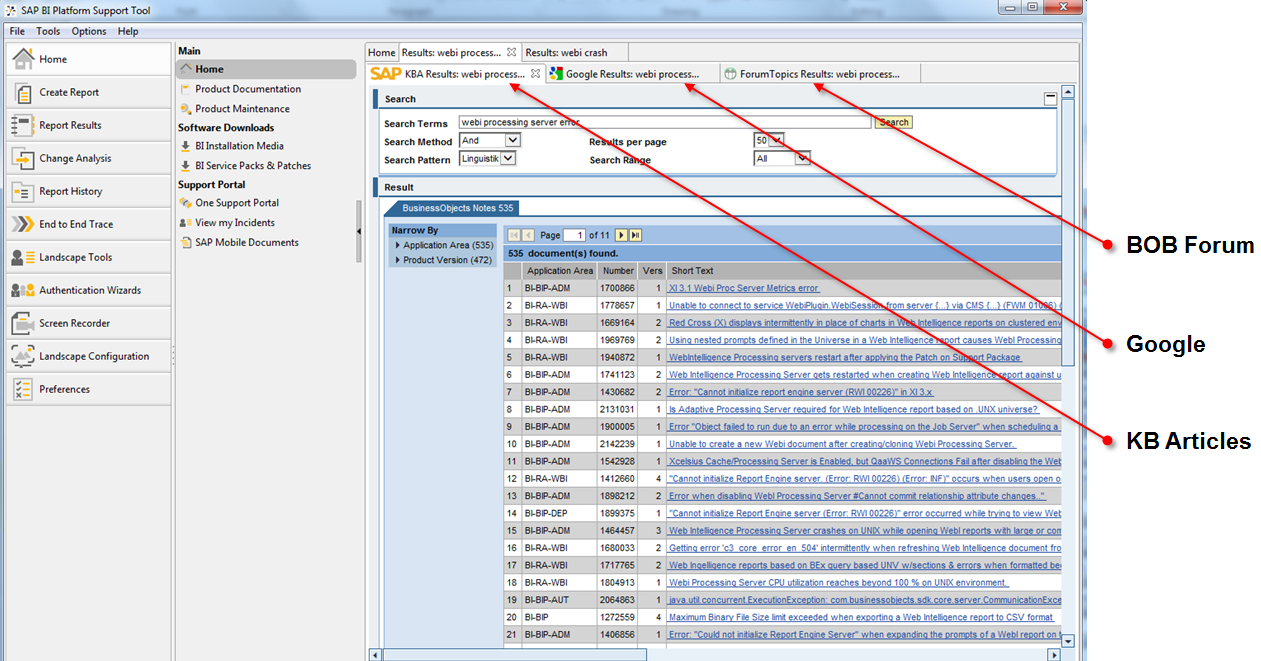 The criteria for including data in the Landscape Analysis Report are:

The generation of a Landscape Analysis Report occurs in two separate phases, Extraction phase, and Report Generation phase.  This separation makes it such that historical report instances can be opened and saved data can be analyzed or compared separately from the actual data extraction.  As a result, it is possible for offline analysis to occur by SAP support or other consulting organizations that cannot connect directly to the live customer system.

We have implemented the same charting engine as used by other SAP BusinessObjects Analytics products such as Lumira and Design Studio.  The CVOM charting engine allows us to visualize more of the system metrics and properties making analysis quicker and more intuitive. 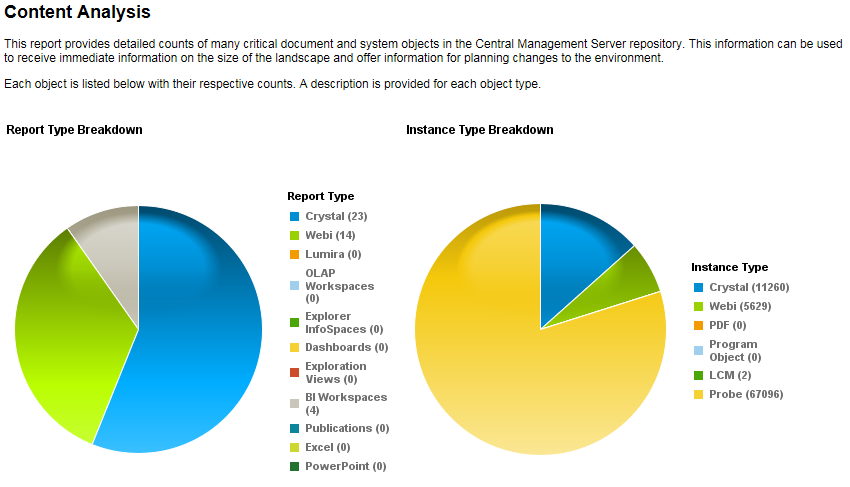 In version 2.0, we have both added new types of analysis and improved the functionality of the existing analysis that existed in version 1.x.  Refer to the table below for a list of the analysis types and information about that analysis. 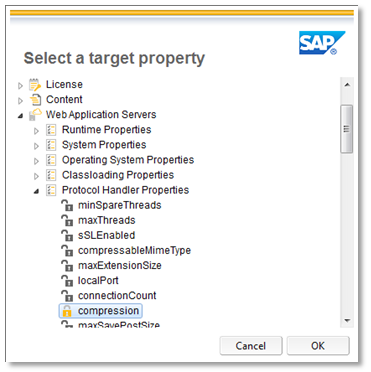 One limitation of the previous version is that all the alerts and thresholds were static and configured at development time.  In version 2.0, we have made a new extensible alert framework that allows the expansion and customization of the metrics and settings that are evaluated.  Additionally, the threshold values and logic used to trigger the alerts can also be customized to better align with the needs of a particular organization or environment.

There is some new alert terminology to be aware of in the 2.0 platform.

Simple Alerts – Allow user customization, changes to thresholds, delete or add new metrics.  Simple alerts are limited to evaluation of one metric/setting and one logic operator

System Alerts – These are system defined alerts which allow for more advanced logic and analysis.  System alerts include things such as keycodes expiring in the next 30, 60, or 90 days, nodes not at the same install patch level, or nodes not running the same support pack

Complex Alerts – Complex alerts are alerts which allow you to combine the results of two or more alerts and allow the use of AND and OR logic to determine the alert state.  Complex Alerts are not available yet in version 2.0 and are scheduled to be implemented in the next version (version 2.1)

Alert Definitions – Alerts are configured via the preferences UI and are stored in the file alerts.xml under the BI Platform Support Tool /resources/Alerting directory 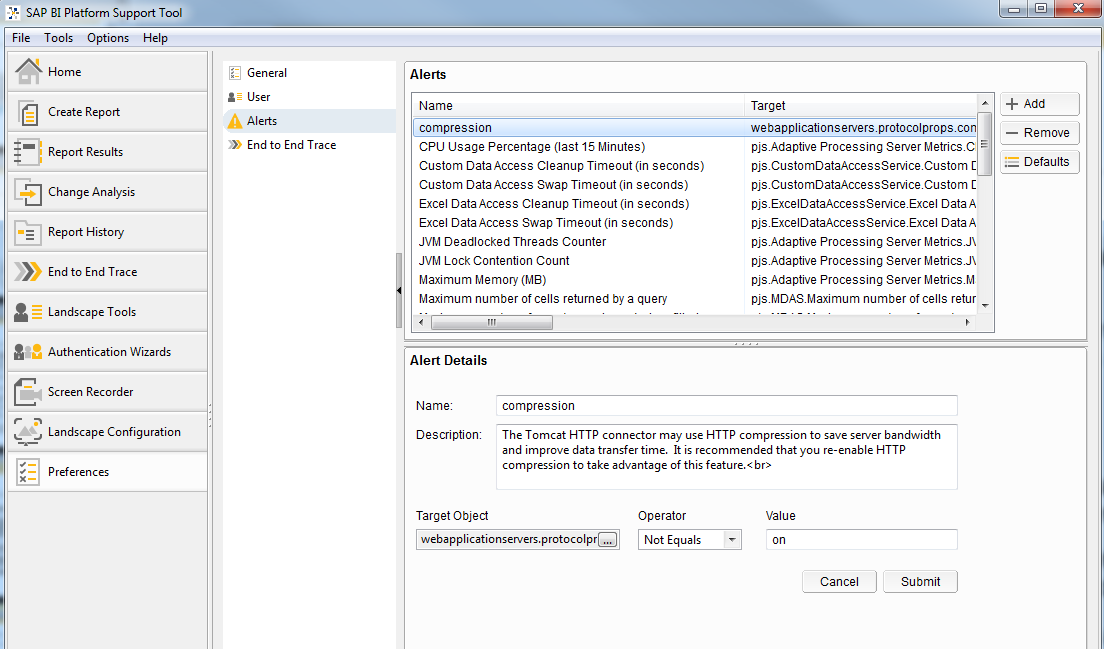 Any simple or system alerts triggered in the Landscape Analysis will appear on the Alert Summary Tab.  This makes it possible to quickly review which alerts were triggered in a particular analysis so that actions may be taken where necessary.  The Alert Summary tab also contains information such as the user who ran the Landscape Analysis, how long the processing took, and what version of the SAP BI Platform Support Tool was used to generate the analysis. 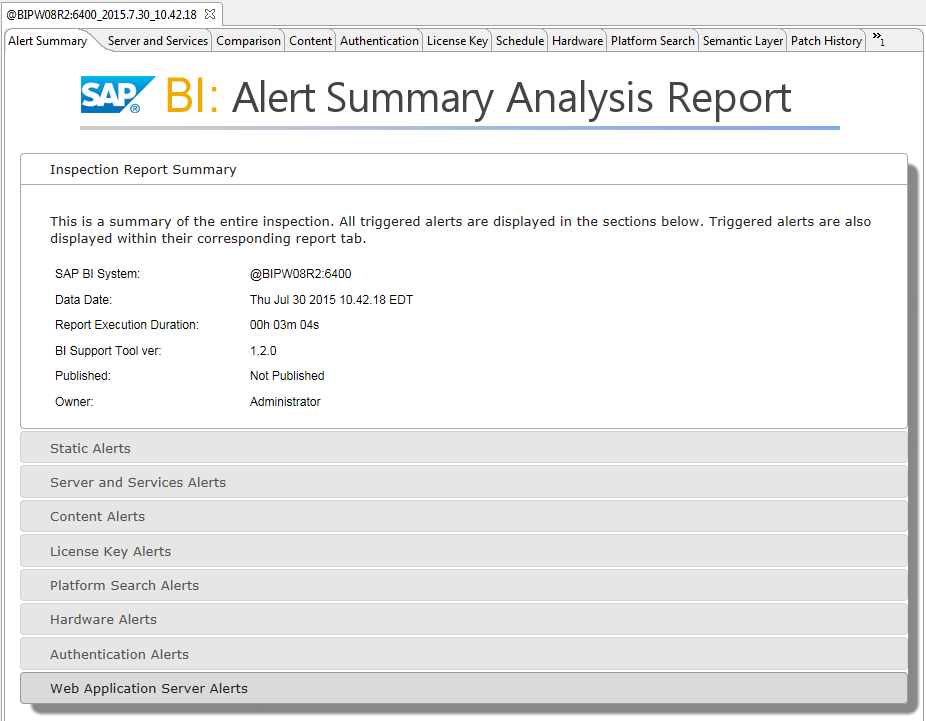 One of the most common activities required for root cause analysis of a BI landscape is to generate an End to End Trace.  Using the included SAP Client Plug-in, each request sent from the BI client contains an SAP Passport which is intercepted by the application server and passed along to the backend processing servers and databases.  This feature automates this process by automatically configuring the BO_trace.ini on each BI node, recording a video capture of the trace session, and collecting the log files from each host in the landscape for the user. 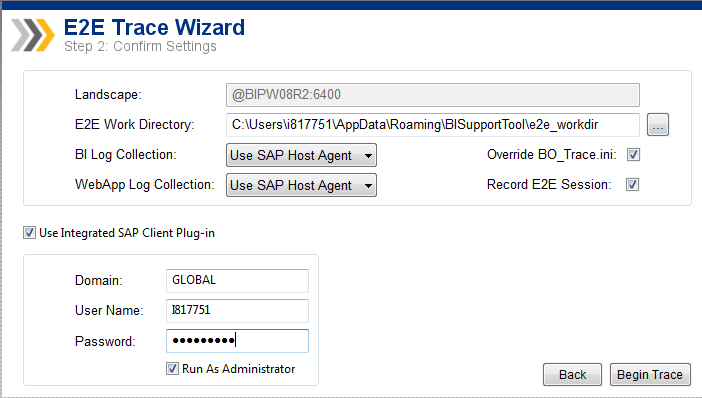 The E2E Trace Wizard relies on the existing Landscape Definition to understand which BI nodes and Application Server nodes are defined for the target landscape.  For each BI node and Application Server node, the user has a choice of whether they want to use the SAP Host Agent or UNC Shared Directories to collect log files from the remote hosts.  This allows flexibility for cases where the customer cannot run a SAP Host Agent or share network folders on a particular node type.  After the logs are collected, the content is zipped up and stored in the E2E working directory of the BI Platform Support Tool user directory.  The user may then forward this required tracing information and video capture to SAP for quick problem resolution or code correction.  Once the trace session is complete, the E2E Trace Wizard will revert the BO_trace.ini back to default settings on each node in the landscape.

When compared, each data landscape XML is loaded into memory of the BI Platform Support Tool.  Each property name, property value pair is compared using a comparator and when differences are found, the differences are displayed in the client in columnar format.  Values determined to be different are highlighted in yellow for quick and easy identification.  Although useful for identifying changes to the system, the Change Analysis tool can also be used to view a change in performance metrics over a period time (for example, Memory Usage on Saturday each week). 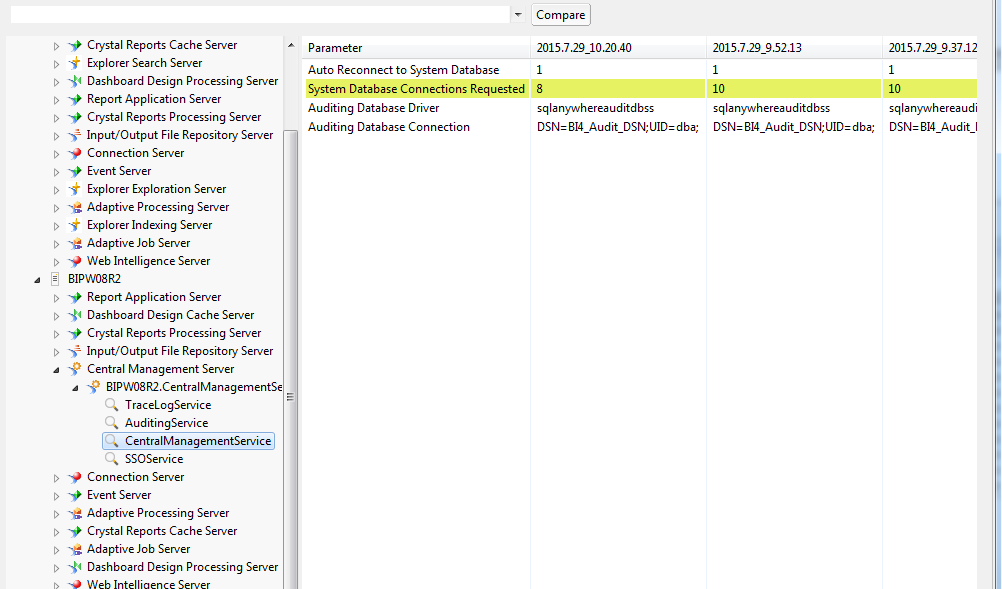 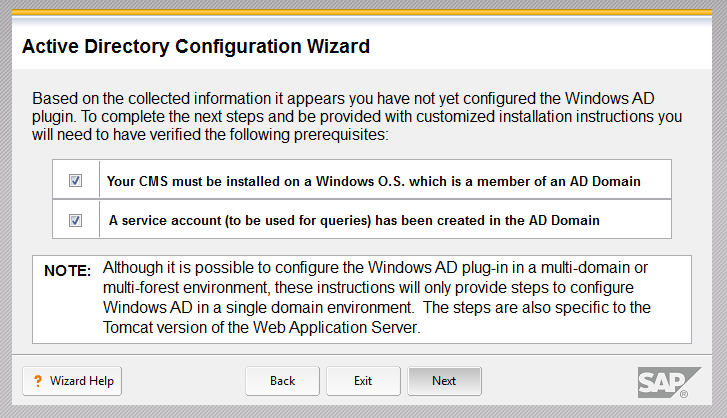 The procedure for setting up third party authentication and single sign on (SSO) tends to generate a lot of incidents and can be a fairly complex set of procedures.  This process requires the administrator to read the manual and follow instructions very closely for success.  Additionally, differences in environments can make understanding the setup guide a bit difficult since it is not tailored for their particular landscape.  This is where the Authentication Wizard comes in.  This wizard guides the BI administrator through every step of the process while customizing the setup depending on their own domain, LDAP, or SAP environment.  Furthermore, it even authors emails for the BI administrator to send to their domain administrators with instructions on the steps that need to be taken on the domain controller, BW system, LDAP server, etc.  This wizard is truly like having SAP Support helping you without ever needing to create an incident.

The new Landscape Tools section contains a number of Diagnostic Tools which are mostly used by SAP Support for specific troubleshooting tasks. This area is mainly for smaller applications that do not fit the criteria required for the Landscape Analysis Report.  Applications in this area are usually tools that have existed in support in the form of JSP pages or smaller Java console applications.  Refer to the table below for details on the included tools: 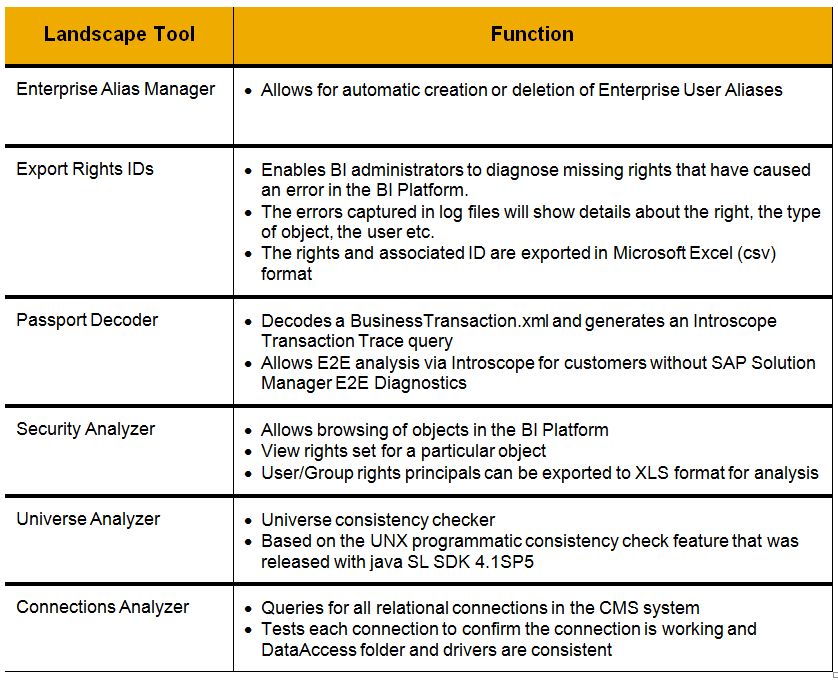 Predictive Maintenance is a big initiative here at SAP Active Global Support and to help facilitate a more pro-active support service, we have built into version 2.0 the ability to safely and securely publish your Landscape Analysis Report directly to SAP.  If you choose to participate, your landscape XML is consumed on an internal SAP HANA system where a variety of analytics can automatically check for problems such as:

The goal of this functionality is to identify problems before they occur and pro-actively reach out via email to those customers and administrators who may be affected by the problem or situation.

The SAP BI Platform Support Tool 2.0 will be released for free as an official product on the SAP Store.  Since it is an official product, we are subject to SAP Product Standards and as a result, the release has taken a bit longer than originally expected.  Prior to release to customer, we will be having a beta release.   We are in the final stages of the release process now and plan to release the beta in August 2015.  Release to customer will follow in September / October time frame after the beta program wraps up. 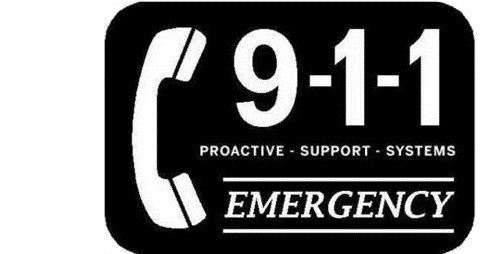