Organizations involved with refugee relief from the Rhine-Neckar region came to SAP to present their work and ask for help. Many interested employees showed up to find out where and how their help is needed most.

This is a hot topic. Many people escape to Germany as refugees, and many people here want to help them. But as soon as the desire to actively help is there, all these questions pop up: Where and how is my help needed? Who do I contact to get started? This is exactly what the Heroes’ Arena Special event was for. SAP Corporate Social Responsibility (CSR) invited more than ten associations and organizations involved with refugee relief to Walldorf for half a day. They are all active in the Rhine-Neckar region and need all kinds of help: Donations in kind, volunteers to teach German, or people to play soccer with the refugees, and much more. 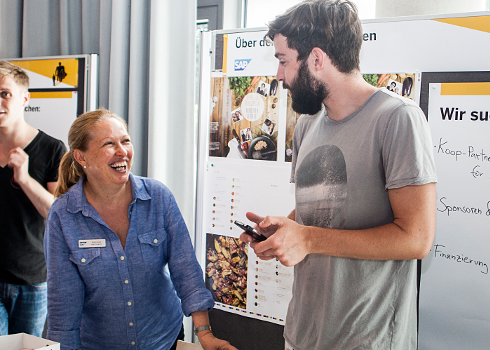 The idea behind the event was to encourage direct communication and conversation between the organizations and interested SAP employees. To this effect, the “marketplace” was in the center of this event. Anyone interested could go from stand to stand and talk to representatives of each organization. In addition to information brochures, they had to offer many personal experience reports. After a while, everyone was invited to gather in front of the stage. Three social startups supported by SAP introduced themselves and talked about their refugee initiatives. Later on, some refugees stepped onto the stage to share their side of the story. They opened a round of discussions and brought the reality and graveness of the refugee situation to life by sharing their own stories. A dentist from Syria described how he is trying to find a foothold in Germany. Even though he himself lives in misery, all his thoughts and concerns are for the family he had to leave behind. “My greatest wish is that the war in my homeland comes to an end.” Right next to him sat Herbert Kohl from the “Ich bin ein Viernheimer” initiative, and Zerai Kiros Abraham. Both of them already have much experience with refugees and shared useful and encouraging information. “These people are not refugees, but heroes. They have made great sacrifices to get a chance for a better life,” said Zerai Kiros Abraham. He came from Eritrea in 1990 to seek asylum in Germany. Today, he is actively engaged in refugee relief, to help others like himself.

The desire to help and the drive to do something were almost tangible. There were conversations everywhere. The stands were always full. In the end, both employees and representatives had many positive things to say about the event. 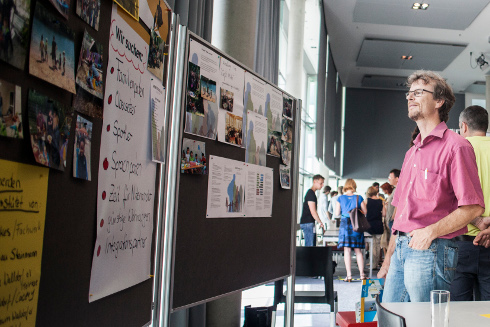 “I find it very useful that we can find information right at our workplace, and without any effort,” said Michael Bellem, SAP employee. Marlene Brueggemann agreed with him. “Heroes’ Arena Special made it incredibly easy for me to slip out and gather information in my spare time.”

Ina Daniela Weber is part of the team that organized the event. “I am impressed by how many colleagues want to get involved with refugees and help their integration in any way they can,” she said. “It was nice to see so many people making contacts and exchanging ideas, also among the organizations that came here. The need for help in these initiatives is great, but I think we have created a good platform for volunteers to get involved through this event.”

Right after the event, there have been more than 50 donations, including laptops, bicycles, and several pledges to help.