The APPSTOSS AWARD 2015 recently kicked off in
Walldorf, and further hackathons involving young soccer players are set to
follow around the world.

It’s game day in mid-July 2015 in Walldorf.
Five teams comprising a total of 28 SAP employees from Products &
Innovation in Walldorf and St. Leon-Rot – as well as a number of college students
and trainees – are locked in and listening to tactical instructions for the
upcoming APPSTOSS AWARD competition. Their coaches: 20 soccer players between
the ages of 16 and 25. The templates, two ideas submitted by young members of
the local soccer association Badischer Fußballverband, are set and ready for
the participants to turn into prototypes in the space of just three days. These
ideas were meant to answer the question of how an app could benefit the young
athletes’ own clubs; after all, even amateur soccer teams have long since
entered the digital age. SAP Executive Board member Bernd Leukert, who is also
the event’s sponsor, has also come to cheer on all the teams from the
sidelines. “We’re happy to be hosting the APPSTOSS AWARD tournament for
the second time right here in Walldorf,” he declares.

The ideas to be realized include one app
for planning training sessions and games, and another designed to serve as a
digital club magazine. The three referees – Wieland Schreiner, EVP and chief
product owner for SAP S/4HANA; Clemens Frede, director of program development
at the IT donation portal Stifter-helfen.de; and Ronny Zimmermann, president of
Badischer Fußballverband and vice president of the German Football Association
– were clearly hard-pressed to select a winner from among the five teams. All
of them had shown plenty of what the refs were looking for. “The purpose
of an app is to provide added value to the user,” explains Schreiner.
Zimmermann adds: “Most of those who work in the amateur leagues are
volunteers, so we ultimately wanted to see apps that would make their lives
easier in particular.”

In the end, Maurice Breit, Dominik Finkbeiner, Roman Kostka, Anton Kharitonov, and Thomas
Jansen from the SAP Tools Team raised the trophy. In presenting “Coach+”, their
version of a training- and game-planning app based on the idea submitted by
Sabrina Roßmannek (VfB Bad Rappenau), the winners were on target in more than
just showing off their dribbling skills. 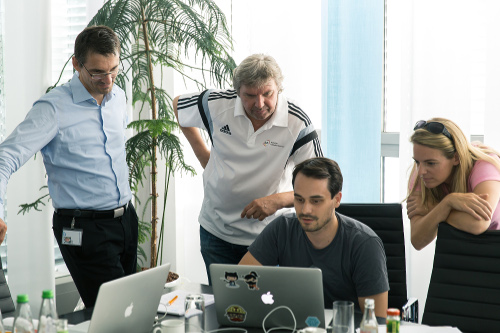 None of the participants came away from the tournament empty-handed, however: Development
employee Stefan Schwöbel, for example, sees the opportunity to meet new
colleagues from other areas and work together on a project at events like
APPSTOSS as a “definite plus” for himself and his coworkers.
“When it comes to sharing ideas on technology, you learn a ton of new
stuff here in a really short time,” affirms Alexander Lenz, one of
Stefan’s teammates.

Soccer can inspire us – what about technology?

Along with the hackathon itself, APPSTOSS had many more highlights in store. A number of
prominent guests offered glimpses behind the scenes of soccer: Sports
journalist Jens-Jörg Rieck, for instance, spoke about the challenges of live
commentary and the search for female commentators in professional soccer before
inviting the young athletes in attendance to a soccer commentator challenge.
During the experts’ talk, former soccer pro and World Cup winner Nia Künzer
recalled some of the most shining moments she had playing for Germany.

In regular feedback sessions with the developers, the young participants also learned how
an app is eventually built based on an initial idea. Both sides wound up
convinced of the merits of this interplay. “It definitely helped to have
the young players included in every feedback session,” one developer agreed.
“I really learned a lot!” reported Janina Leitzig, who plays for TSG
1899 Hoffenheim. “The activities were so fun, and I got to see what SAP
does and how apps are developed.”

The participants also found time to lace up their cleats, of course: At the
facilities of FC Astoria Walldorf, they had the chance to get professional
training and join in a bubble soccer tournament, as well as a subsequent
barbecue. 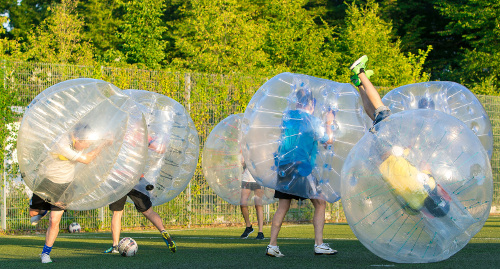 The APPSTOSS AWARD debuted in 2014 with a concept whose implementation truly resonated with
both the developers and young people who took part. The fact that the winning
prototype is currently being transformed into an actual product set to be
finalized this fall has probably played no small part in the event’s
popularity.

In light of this success, why not take the next step? Along with its cooperation partner, streetfootballworld, SAP is now
rolling out and expanding the concept around the world. The 2015 APPSTOSS AWARD
kicked off a series of four additional hackathon events that are being held in
different SAP development locations under the name KickApp Cup. This initiative
will be able to reach around 10,000 socially disadvantaged youths. Through
soccer, SAP and streetfootballworld are doing more than promoting teamwork and
social interaction; they’re also teaching the younger generation about the jobs
available in STEM fields (science, technology, engineering and mathematics), along with possible ways to get started in the working world.

Providing long-term support to children and teens is a particular focus of the KickApp
Cup. “Getting young people ready for the job market is a key focus for
us,” points out Frauke Horstmann from streetfootballworld.

The winners of the five events, the APPSTOSS AWARD, and the KickApp Cup can look forward to a prize that would have any soccer fan drooling: the chance to participate in the KickApp Cup finals in Lyon, France, during the 2016 UEFA European Championship. It’s a safe bet that Thomas
Jansen and his fellow competitors will be staying on the ball: “We
obviously want to stay involved in the ongoing development of our
prototype,” he says. “We’re also super excited to meet the other four
teams and check out their ideas in Lyon!” 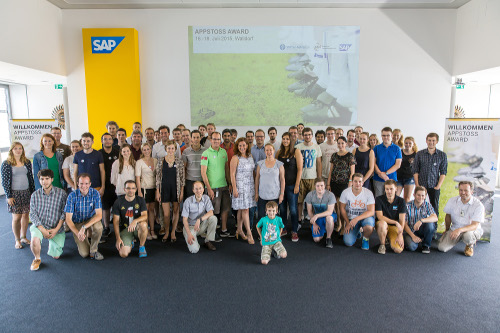