A Bleak Future for Flash and Xcelsius/SAP Dashboards 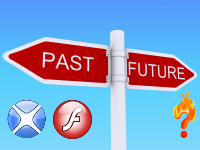 SAP have said that there is going to be no further development of Xcelsius/SAP Dashboards but that they are committed to supporting its output for the foreseeable future. However, given what is happening to Adobe Flash, effective end of life may be very much nearer than we had previously thought.

Just this week we were approached by a BI team who had, rather suddenly, been informed by their IT folks that, due to security concerns, Flash was going to be disabled on their corporate network next Monday.

This left 200+ users who rely on an Xcelsius dashboard rather high and dry, and left the BI team furiously searching for something which could replicate what they had done in Xcelsius but did not depend on Flash.

All this was sparked last week when Mozilla Firefox announced that it is now blocking Flash on all versions of its Firefox browser due to recently unearthed bugs in Flash which were being actively used by cyber-thieves to install malware on computers and steal data.

Mozilla’s stand against Flash comes shortly after Facebook’s new security chief Alex Stamos publicly called for Adobe to kill off Flash for good. YouTube announced earlier this year that it’s dropping Flash in favour of HTML5 for its default video player, with YouTube engineer Richard Leider saying “the time had come to ditch the aging Flash”.

The upshot is it will now be a lot harder for Firefox users to view Xcelsius dashboards, and it’s likely that other browser developers will follow suit. And with such influential voices as Facebook and YouTube wading into the “kill Flash” argument, Adobe will be feeling increased pressure to announce an end-of-life date for this ageing technology.

This means that even though SAP have yet to announce an end-of-life date for Xcelsius the issue could be out of their hands. If other browser vendors follow Mozilla’s lead then your Xcelsius dashboards could be left high and dry and you could be forced to very quickly migrate to an alternative dashboard tool. (Update: Dallas Marks made similar points on his blog last week, Will Security Concerns Override Your BI Strategy?)

However, this shouldn’t be a surprise to anyone. Ever since Steve Jobs controversially published his ‘Thoughts on Flash’ in 2010, the writing has been on the wall for Flash, but it looks like things could soon be coming to a head. For Xcelsius users this means you should be accelerating your plans to move away from this legacy, Flash-based technology.

If you are a BW user and you have strong development skills within your team, then Design Studio could be a good way forward for you.

If you prefer the zero-coding approach of Xcelsius and need good access to relational data sources and to the BusinessObjects BI platform, then DecisionPoint™ from Antivia is another option you may wish to consider.

Watch this two-minute introduction video to see how DecisionPoint™ could offer you a new life beyond Xcelsius.

If our IT security teams take away Adobe Flash, it not only cripples SAP Dashboards (and Explorer, too), but also several other minor features of the SAP BI platform that probably need to be redesigned without Adobe Flash. Recent actions by Google and Mozilla are certainly an interesting turn of events.

I suspect we will see more preemptive strikes against Flash by IT/security teams in the coming weeks and months. As you say, this will make it an "interesting" time.

With our upcoming BI 4.2 release, we plan to implement Override Settings (Promotion Management) in HTML5. We are evaluating what needs to be done for Monitoring.

And if you have .unx Universes or HANA views you can also create Design Studio dashboards and applications against these sources as well.