Easily Drill Down into Your Geodata with Galigeo for Lumira

Galigeo for Lumira is back in a fresh new version, introducing a new feature that might be of interest to many of you.

Whether you are already using Galigeo for Lumira or not, you can find the latest version on the SAP Analytics Market Place.

EDIT, 07th July 2016 : with the release of Galigeo For Lumira 2.0, the drill-down/drill-up feature presented below has been improved. Find more details about it right here…

…or see it live right now!

What is this new feature about?

That’s right, you’ve got it…the title of this blog post says it all. We have decided to call it Smart Drill Down (or more generally speaking, Smart Drill), firstly because it will allow anyone to drill up or down on the layers on the map, and secondly because it does not need any configuration from the user in order to take effect. There is also no need to define a hierarchy in Lumira and it will work with any custom or default data.

To demonstrate how it works, let’s look at a real world example.

We’ll put ourselves in the shoes of a drinks manufacturing company.

This company has an abundance of data about the pubs and restaurants delivering its products, such as how many products are delivered each week, net income, turnover, … like any company that uses Lumira, I suppose.

Please note that the following example derives from a real case study from one of our clients but the data values have been modified for the sake of this example.

I want to display a potential turnover over for Paris, France. I have several layers for it.

With the previous version of Galigeo For Lumira, if I’d chosen a single indicator (Potential Turnover in K€) and then dropped the three layers into the Geolayers input, this is what I would have so far. 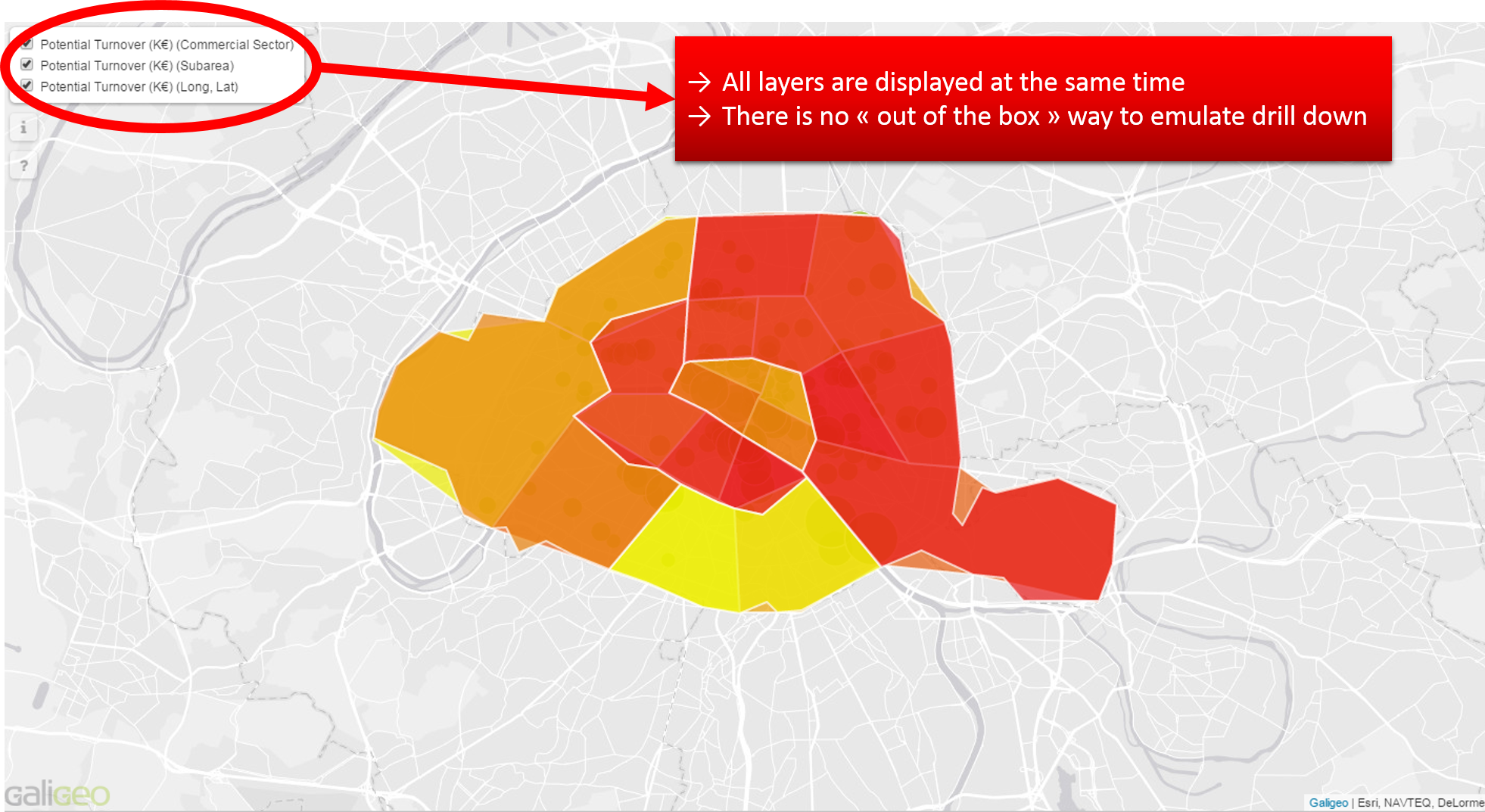 It already provides good insights for sure but there are several drawbacks :

I would therefore have to manually filter the data, manually hide/show my layers in order to explore my data – a process that can be quite lengthy when you have a lot of data.

Now, let’s see what the new Galigeo for Lumira version does when I configure my Indicator and my Geolayers dropboxes in the same way. 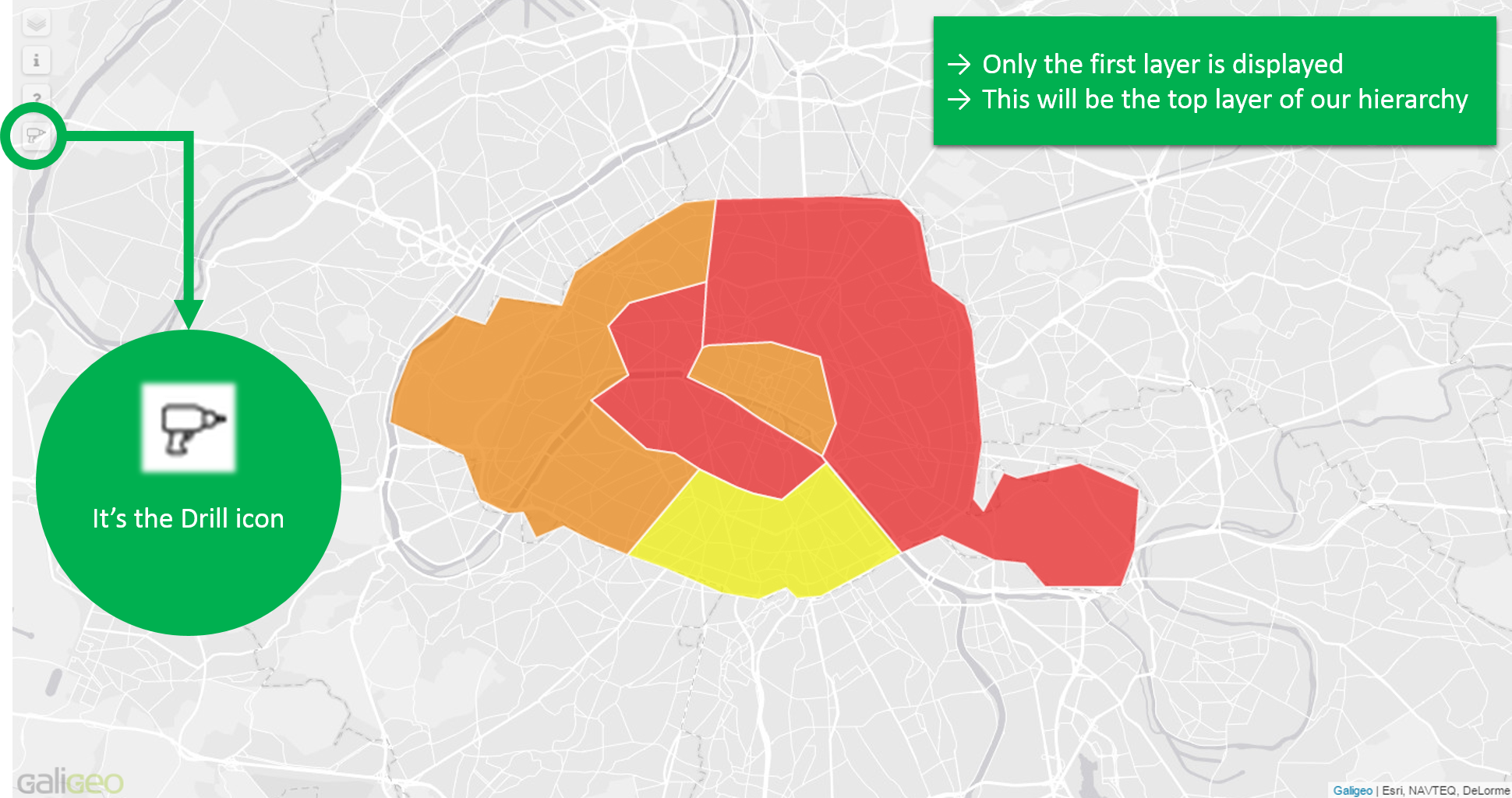 Interesting enough, this time, only the top layer is displayed, and there is an additional icon on the top left of the map.

This icon allows me perform two actions : drill up and drill down. 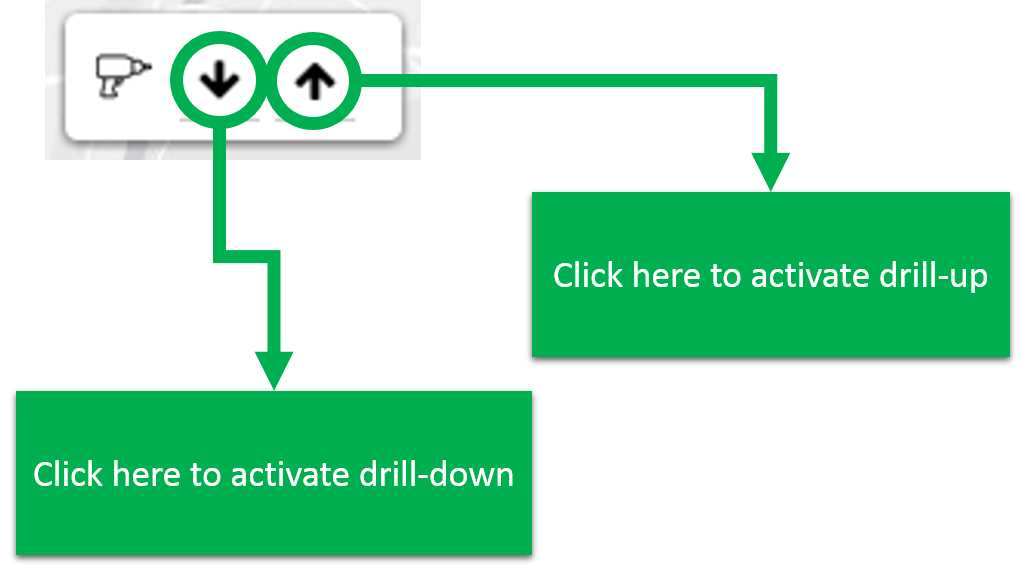 If I click on the drill down button, when hovering a sector on the map, it’s outlined in red.

Let’s click on the sector which has the highest turnover potential.

The sector layer has been drilled down and now only the subsectors of the drilled sector are displayed. 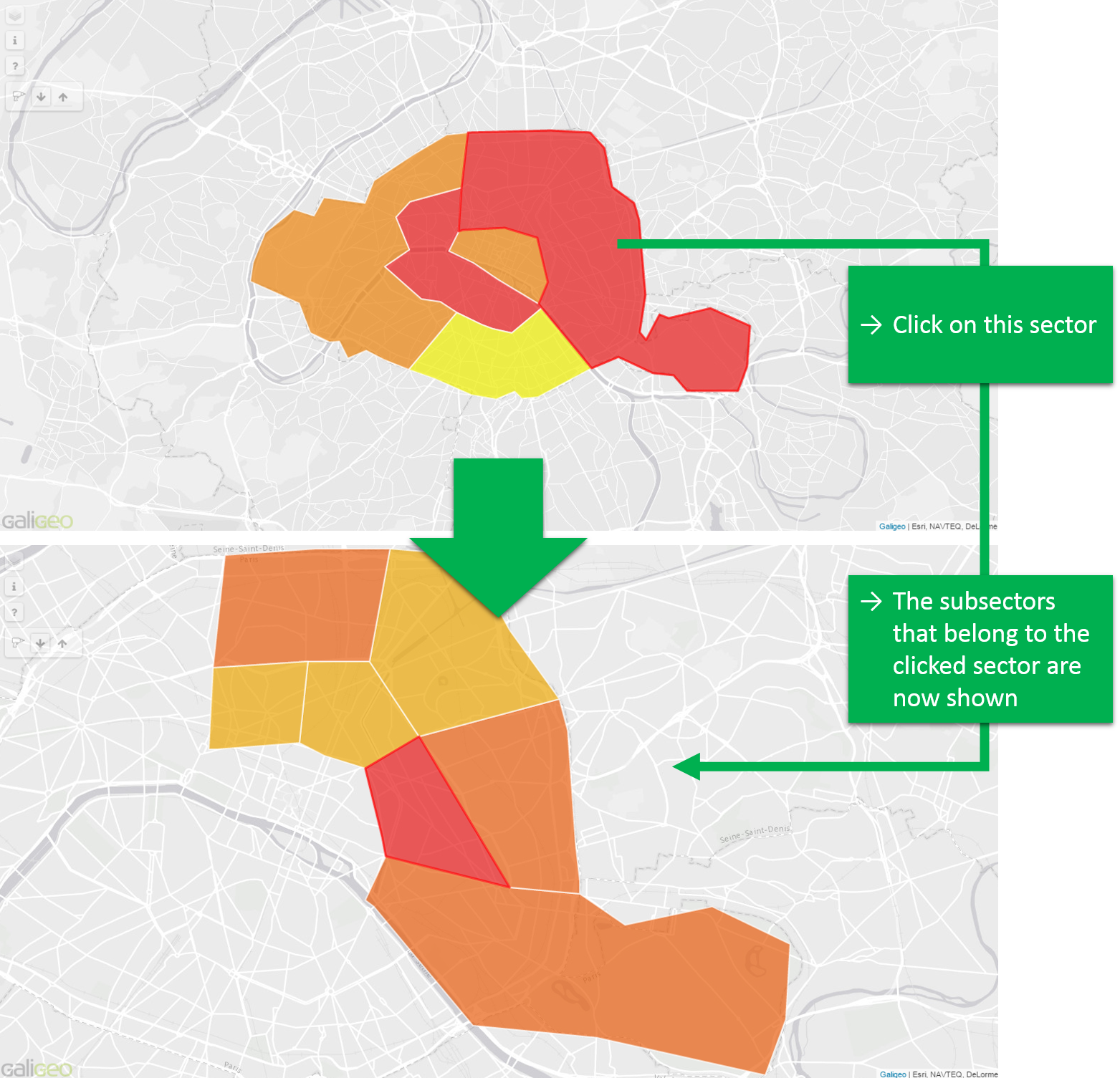 With Drill Down still enabled, I’ll click again on the subsector which has the highest potential turnover. 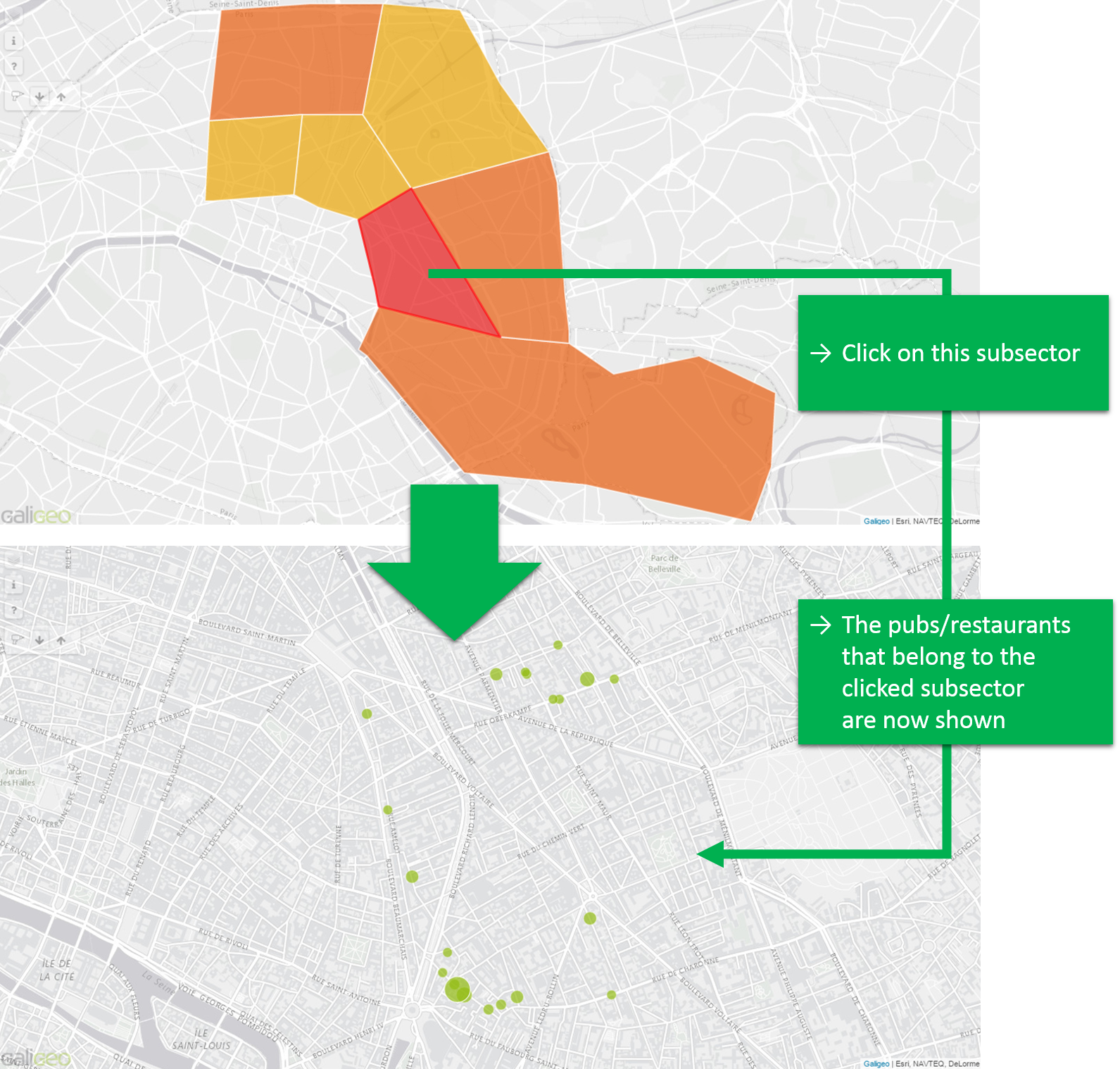 Same effect, the subsector has been drilled down, and now only the pubs/restaurants that geographically belong to the drilled subsector are being shown.

The bubbles representation is giving me a a clear idea of which pubs/restaurants have the highest potential turnover. 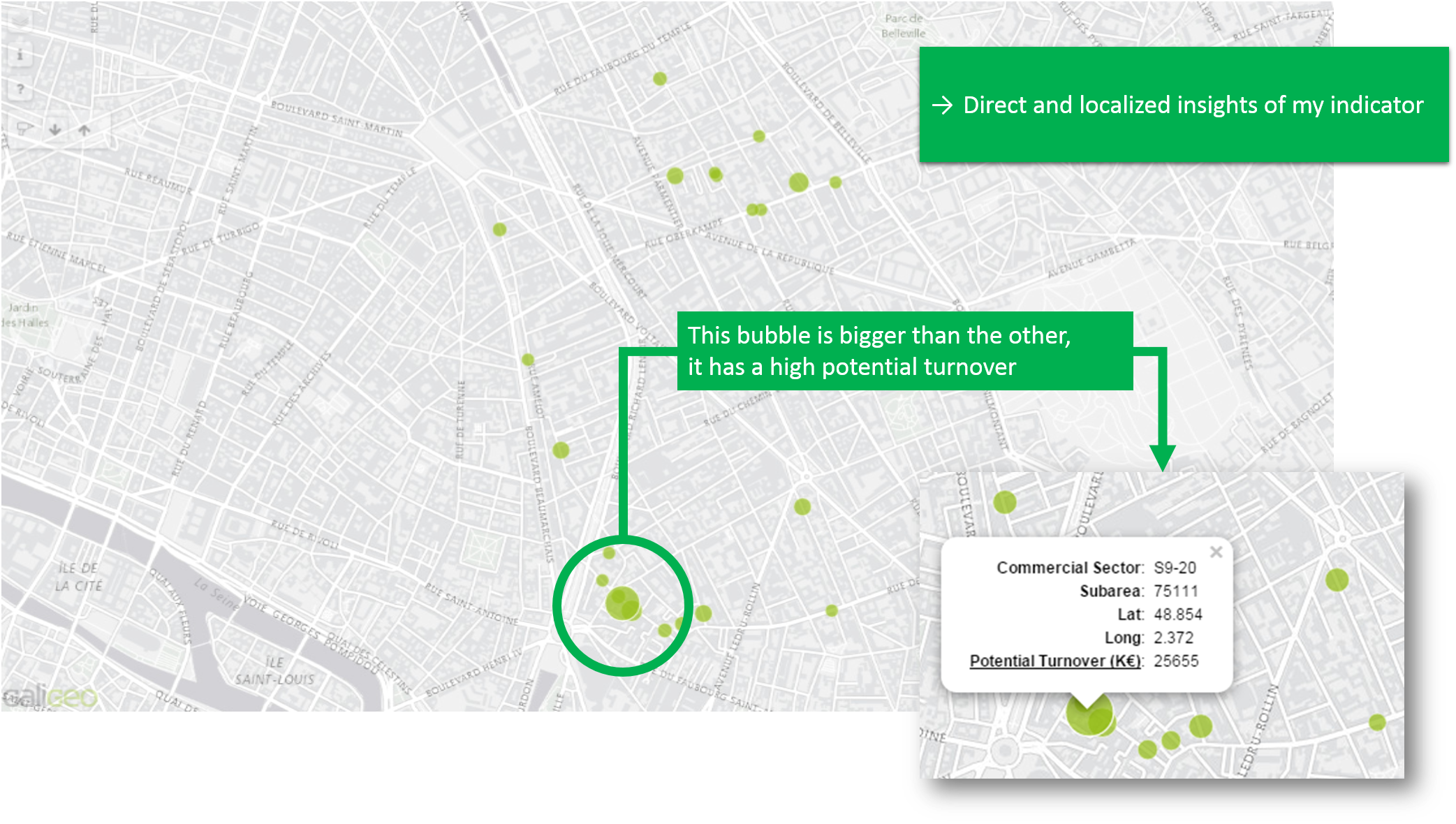 The drill up button has, as you might expect, an inverted effect. If I click on it, it will drill up from the pubs/restaurants layer to the subsectors layer. 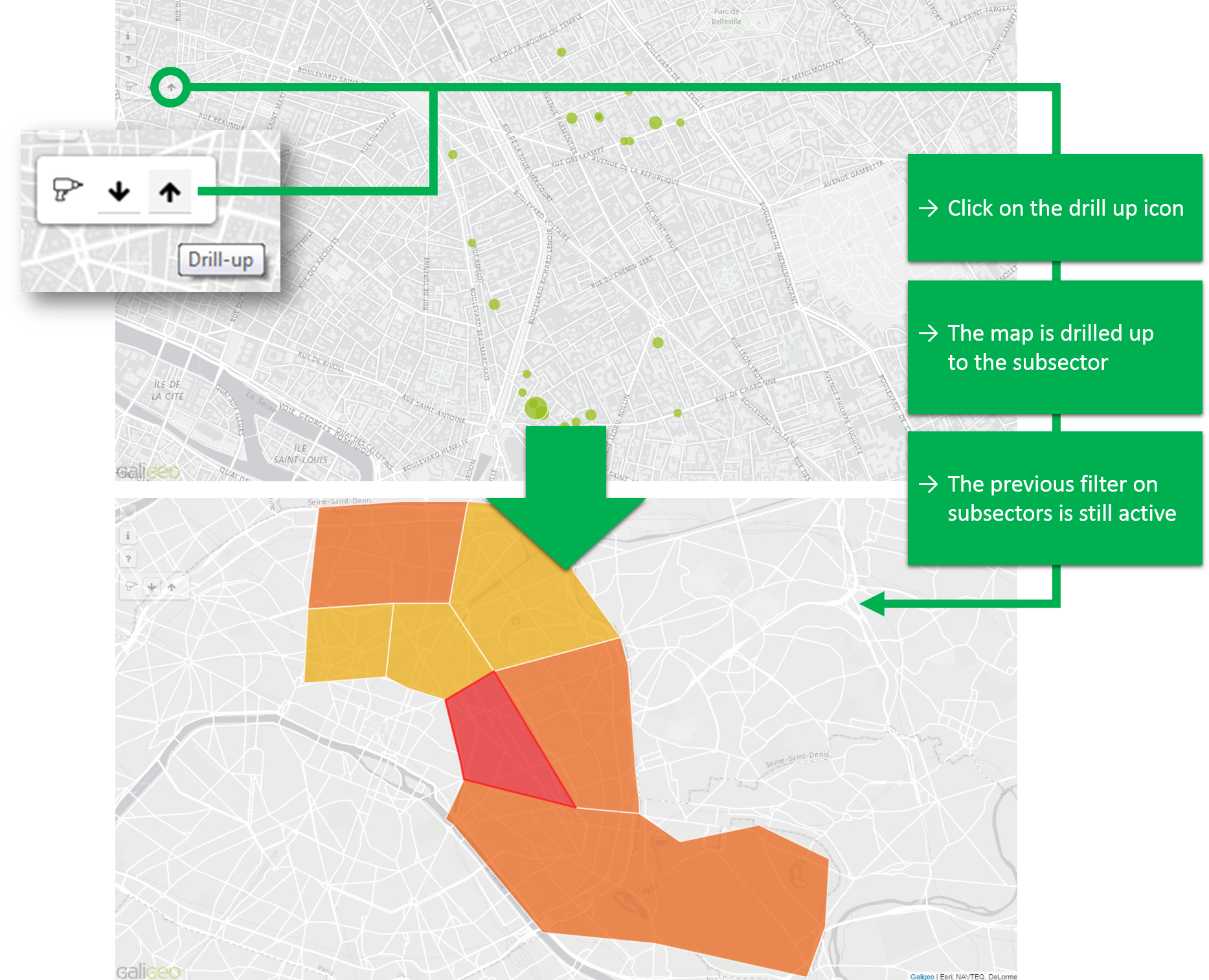 You might notice that the filter on the subsectors layer, that was made when drilling down from sectors to subsectors, is still active, which is handy to keep exploring with other subsectors from the initially selected sector.

That’s pretty much it.

No configuration needed, that drill hierarchy can take as many layers as are necessary.

For example, it could be Country > Regions > SubRegions > Custom Subregion > POI and it would still work.

The few, basic prerequisites are as follows :

Really excited or still not convinced?

Please note that Galigeo for Lumira is coming soon for Lumira Server for BI Platform.

Does it work with any geographic hierarchy and with my own geographic data?

Thanks for your answer.

Yes it works with any custom data, so basically your owns. It also with any geographical hierarchy.

I tested everything you said here and being used to other products (where the drill-down was a "science", i.e. very complicated), I did not quite understand how it works, however after a little bit consulting with the guys, I manage now to do any drill-down or up on any data on any geographical layers. Of course I have to keep the rules, as simple as they are, but I have to.

I played around a little with your extension, and I think I've noticed something... Can extensions that are created as DIV extensions not be used in the Compose room?  I am also having this same symptom in a DIV extension of mine...

On our side the extension is working on Compose tab. I can add multiple map/heatmap and they are displayed correctly. I am using Lumira 1.27 build 52 (latest patch I guess) 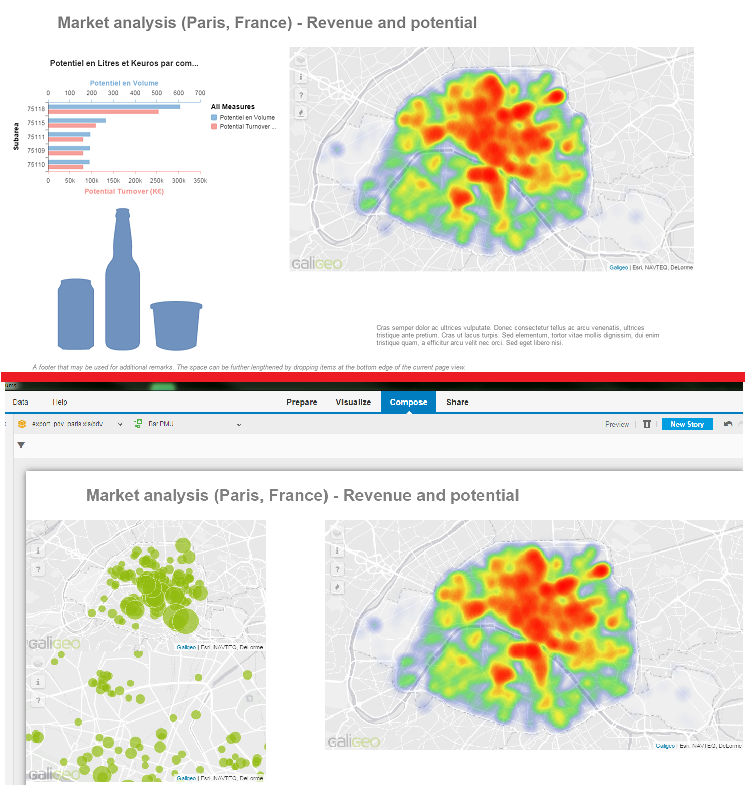 Which issue did you face on Compose tab ? I could take a look it would be interesting.

Thanks for feedback anyway 🙂 .

Hey Vincent, thanks for responding. Good news for me then but I am left a little puzzled then why i am having problems. I am on 1.27 and basically the issue hat I noticed yesterday was that extensions that used DIV instead of SVG would show up fine in the Visualize room and I could save them, etc but those visualizations would not appear of the deck of ones to pick in the Compose room. I had assumed since they happened to both be DIV extensions that this was the reason however now it sounds like it must be something else. Perhaps one of the other extensions I have installed has introduced a problem. I will attempt to remove them one by and and get to the bottom of it.

Thanks for for all your great work with your maps!

In Compose mode tho, I don't see the thumbnail for DIV visualization. So if I have some it can be "hard" to know which thumbail points to which viz. But anyway I'm still able to drag and drop them on the story panel. 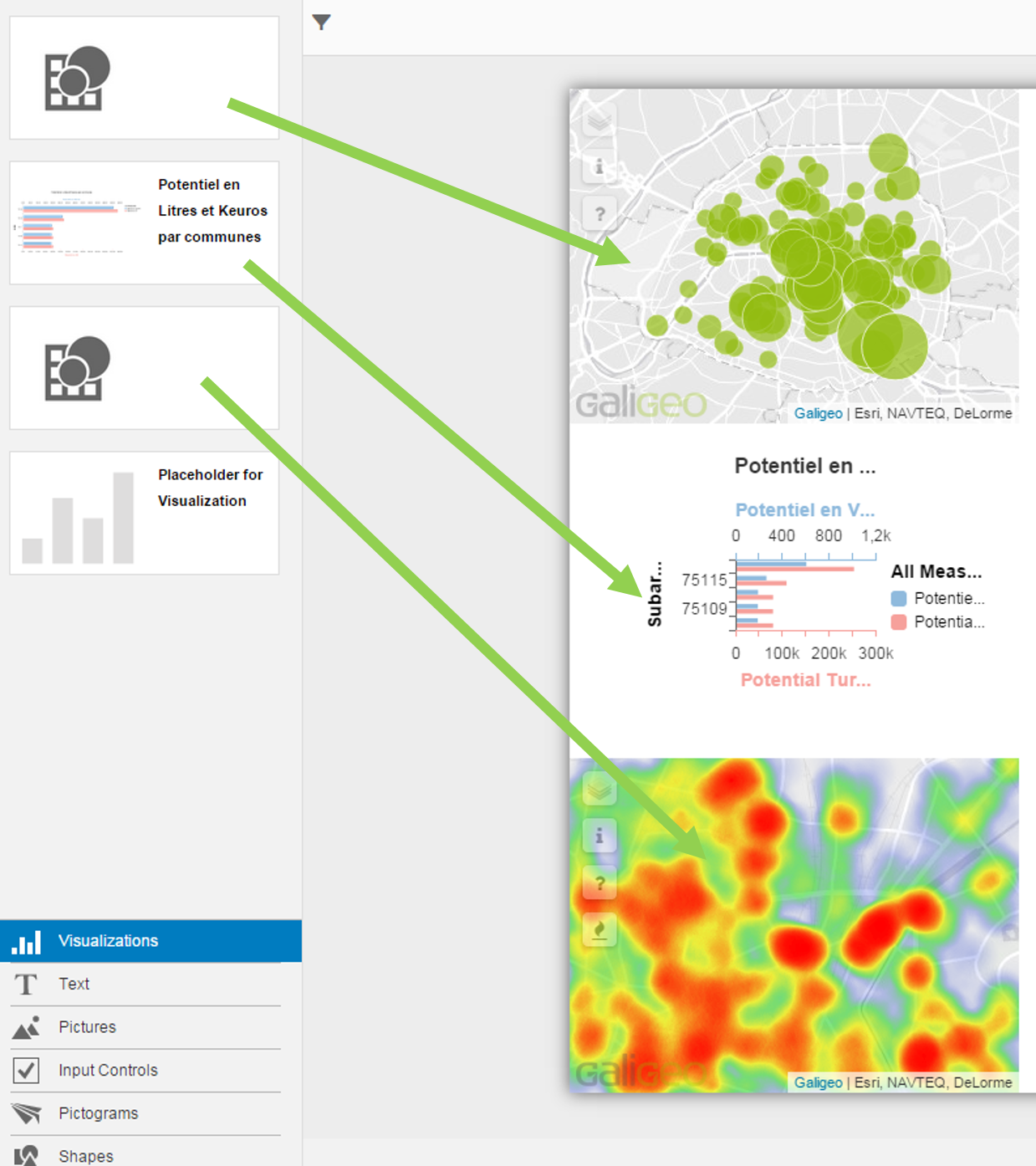 If you investigate, tell me if you find something related to our extensions.

I figured it out - I had a messed up .lums file that I was using.  I started with a new one and I do not have the problems with either your or my DIV extension.  Also yes, the lack of thumbnails is a little unfortunate but I they are using canvg to take the thumbnail pics, which I think just works on SVGs and not so much on HTML elements.

I guess there is some sort of image processor for thumbail (on server side ?), because generated thumbnails have encoded base64 image in img tag.

Thanks for sharing. I downloaded the Galigeo extension and immediately started to play with it. It was pretty easy to use with the default Galigeo layers

I then tried to create my own layer by converting a shape file outlining provincial boundaries in South Africa. I did this using the mapshaper website. I followed all the instructions including adding the layer into the catalog.json file - this worked quite well.

However when it came to using my layer in the Galigeo Map chart, it didn't work. I created a field called Province in my data and tried using this field to call up the province layer that I had created earlier. No new layers are visible on my map. Any ideas why?

If anybody can help it would be most appreciated. I'd be happy share both my lumira file and the geojson file created by myself

I saw you've contacted Galigeo support meanwhile and already got some answers.

In case that didn't solve your issue, please send us your .lums file together with the geojson as you suggested.

I'm sure we can get it to work 🙂 (you also need to make sure your layers are in the correct order to enable the drill down. For example the dimension fields should be like State > Counties > Zip)

Thanks for the reply. Nothing back fro the Galigeo support people yet so if you can help that would be most appreciated. I don't see an attach option here, how do I go about sending you the lums and json files?

3. Lastly, is there a limit on the number of points displayed on the Galigeo Map? If I'm not mistaken, the current limit on Lumira's Geo Bubble Chart is 10,000 points

The first two features you mentioned are available in other products like Galigeo for  Design Studio but not yet in the Lumira one. They are of course in our roadmap but with no firm date yet.

For your last point, we do have the same limitation. AFAIK it's a standard limitation for custom extensions. Vincent would know the details better but he's on well deserved vacation right now 😀

Would it be possible to view the data of two data sets in the map at the same time? For example, say we we had the following data sets:

Would it be possible to view them both at the same time? The reason for this would be that we could start with the population data and filter on a specific target market (e.g. Males, Age 18+, with a personal income of X). This would then show us all the regions/sub-regions that have a high concentration of this segment. Now it would be really interesting if we could bring up our sales figures for the stores in the sub-regions that we've just identified in terms of the target market?

I know there are some built-in features in Lumira to merge datasets as well as link them. Unfortunately I haven't had the chance to try them out in that context :/

Discussion doesn't seem related to the original post anymore  .. I propose to continue with official support otherwise it will get confusing 😀