Children’s songs in Reinhard Mey style, alternative rock music, and now electro sound – SAP’s Thomas Mattern’s taste in music is very diverse. But who says you have to stick to just one style? Thomas enjoys the freedom of creating music in whatever way he wants to. You will realize very quickly: As a free-time music producer, he likes experimenting. How It All Started

Listening to Thomas’ latest project, Parklake – Terraforming, you would never guess that the beginnings of his music production can be traced back to his kids and a cat. The creative freedom of music has fascinated him ever since he was young. Not only does he write and perform his own songs on classical guitar, but he also plays in a conventional band set-up of guitar, bass, drums, and vocals. However, his breakthrough didn’t come until 2009, when his children asked him to write a song about their pet cat. This became the first in a whole collection of children’s songs that Thomas went on to release on CD. “I produced the album myself because I wanted to find out how this works from end-to-end.” With a do-it-yourself approach, he taught himself how to create an album from scratch. “To me, creativity is more important than musical perfection.”

After producing his first album, Thomas was hooked. So, soon after, Parklake Project was born. This way, he can expand his creative boundaries and link up with fellow music enthusiasts at SAP. His perspective on music is rather unusual. “I manage Parklake much like I would a project at work,” is how Thomas describes his own approach as a producer. His instincts and a large network of contacts help him find the talents he needs for his projects. Once they’re on board, he organizes individual recording sessions with them, “almost like a workshop.” Thomas takes great care to monitor the entire process from conception to first sound-sketches and finally the end production of his records. To him, this is easy:  “I have a very broad range of interests and am involved in many different artistic areas.” He even brings this approach to SAP, working across boundaries and bringing colleagues together from different areas to work towards one goal.

The next Generation: Music 4.0 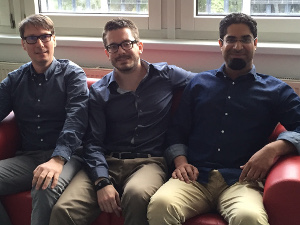 Can you make music without a rehearsal room? Without ever meeting your co-musicians? Thomas and his crew prove that this is indeed possible. Many creative minds are involved in Parklake Project, and, according to Thomas, “some have never even met.” They use virtual communication to create not only music, but also expressive photos and videos to accompany it. This is how Thomas explains the project: “Parklake is not a band in the traditional sense. It is more like a collaboration of artists, in which every single person’s creativity has real input.” There are many advantages to such a virtual music project. One is that “no one can interrupt the other,” notes SAP’s Oliver Pink and member of Thomas’ crew. Oliver created the music video to the title track Terraforming. Photographer and SAP employee Hari Prasad SUBRAMANYAM appreciates the fact that “everyone has room for personal interpretation and artistic freedom”. Since there are fewer arguments, decisions are made much more quickly. “I’ll send Thomas around ten to fifteen edited pictures and ask what he thinks of them,” Hari says. Thomas adds, “A creative collaboration can only work if we follow certain ground principles. We must all have similar creative mindsets and trust each other.”

The secret ingredient of the crew’s music is blending the old with the new, that is, the perfect mix of digital and analog technology. The result is surprisingly good. The Terraforming project is all about change. Video recordings of nature support the topic on a visual level. To capture the right atmosphere for the album artwork, Hari used a special black-and-white only camera – his reasoning being that you need the right equipment to get good results. Some may think that this is a bit over-the-top for a hobby, but Thomas counters, “Golf and skiing are not exactly cheap either.” High-quality equipment allows more room for artistic expression and it’s more fun. “Not being bound to one time and place gives you more flexibility to be creative in your spare time,” Oliver agrees enthusiastically. This hobby is definitely not a burden. Hari sums it up in a few words: “Passion is our platform.”

“Just like at SAP”, Thomas immediately dives from one project to the next. His enthusiasm for creative work is infectious. “I’m always doing something,” he admits. “I can’t just stand still.” The follow-up project to Terraforming is a remix CD with international influences. As part of the remix process, five SAP musicians create alternative electro-sound versions of the album tracks. The remixes will be available on iTunes by this summer. Oliver shares what the beauty of Music 4.0 is to him: “We somehow always stay in touch.” If we’re not working together on the current project, we probably will be on the next one. We might not see each other directly through virtual music cooperation, “but we still never lose sight of each other,” echoes Thomas.