Impact of working with UX as a goal

Members of our development team at the University have had for some years user experience (UX) as one of the goals whenever working on solutions though not as one of the main ones. Last year to reinforce the concept and seeking to keep it in mind at all times, we drew a big UX on the whiteboard of the office. It not only helped us keep focused, but we also trigger a “what’s that big UX there?” to any user visiting is, either for a meeting, request for help or just a short chat. Accidentally we were sending a message to other units that we cared about there experience.

A couple of months ago, the team, together, followed Andreas Hauser’s course “Creating Business Value with User Experience” on open.sap.com with the purpose of adding a formal training on UX. Now, no matter at which step of the project we are, UX is always in mind.

On my previous post I explained how a project which had tried to offer a better user experience for people needing help at a reception desk and at the same time relieving tension at peak moments, had failed for an unexpected aspect but had triggered some alternate ideas and the following app is what we came up with.

On a wall across the reception desk there’s a TV connected to a mini PC with an app running 24×7 showing some institutional information. We decided to strip part of it, quite useless, and decided to show a grid with room occupancy for that building (from day one we made it customizable so the solution would be easily adapted to any other building). Room reservations are done exclusively on SAP be it for regular classes and exams, as well as for any non academic activity. This meant that we had the information we needed to show. First thought was “we’ll post the day’s activity for the building and let the users eye-scan the screen to find their rooms”, the same each school has posted on their halls’ walls. At research and ideate stage, after some brainstorming, it was clear that the activity for all day long would probably be a bad experience for users trying to find there next destination in the building. “Let’s strip some parts” somebody proposed. And added “We don’t to need to show morning activities during the afternoon, what we need to help the users identify where their activity -starting shortly or just started- will take place”. This triggered more ideas, briefly:

A. during the morning hours, it didn’t seem necessary to see evening occupancy

B. unused rooms will only use up space and be no good

C. of the information of a class, what do we need to show? Start time: yes; name of the activity: yes; name of the professor(s): maybe yes, but will probably use up a lot of space (so we decided no to show them); room name: off course; end time: not really.

D. every activity would be represented by a rectangle with it’s length defined by the length of the activity and the name inserted in it, names of some activities would probably have to be stripped somehow

Idea A eventually evolved to adapting depending on current time. The grid shows activities that started two hours ago (starting on the left of the grid) to activities starting in the next 4 hours. The grid refreshes every 5 minutes and the effect if a strip moving left according to the current time.

With all this stripping in mind we expected to grid to be between a quarter and a third the size it would’ve been for the whole day.

We tried different colour combinations for background, borders and texts. It had to be easy to read.

After prototyping and testing we came up with nice first approach. As the screen refreshes every 10 minutes, for debugging purposes we decided to show a “last time of update” on screen. This worked out not only useful to us but also for the reception desk people to know that the app was really working and not frozen at some time of the day.

The following is an example of the screen, last update was 9:50AM and the grid shows activities from 8AM till 2PM:

Testing brought up some issues with activities that would partially fall off the grid, either because of the beginning or ending time. Obviously the rectangles would be stripped in such a way to fit into to grid, so this affected the length of the names even more. In either cases we just shortened to names to fit and complement with “…” to indicate that the name was incomplete.

Once in action it took some weeks for everyone to get used to look at the TV before asking. Intelligently, the people at the reception desk, reacting to a request, would look at the TV instead of their own computer, read from there out loud answering the solicitant. Naturally the incoming person would turn their heads and see by themselves. This was key to the success of the solution. Our students and professors are enjoying more and more benefits out or SAP implementation. 🙂

Following are a some of pictures of the TV in action, taking them with aprox 1 hour of difference 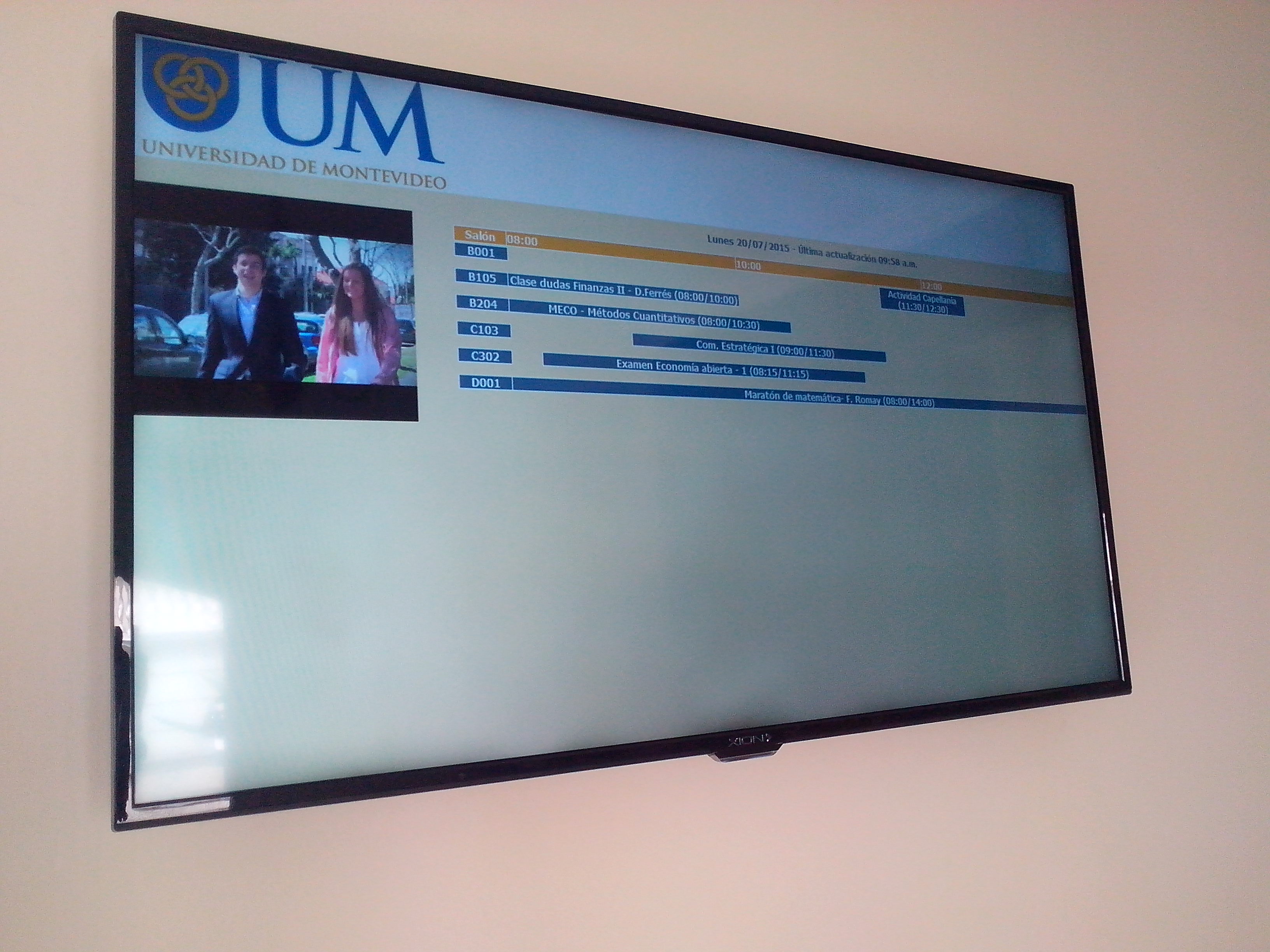 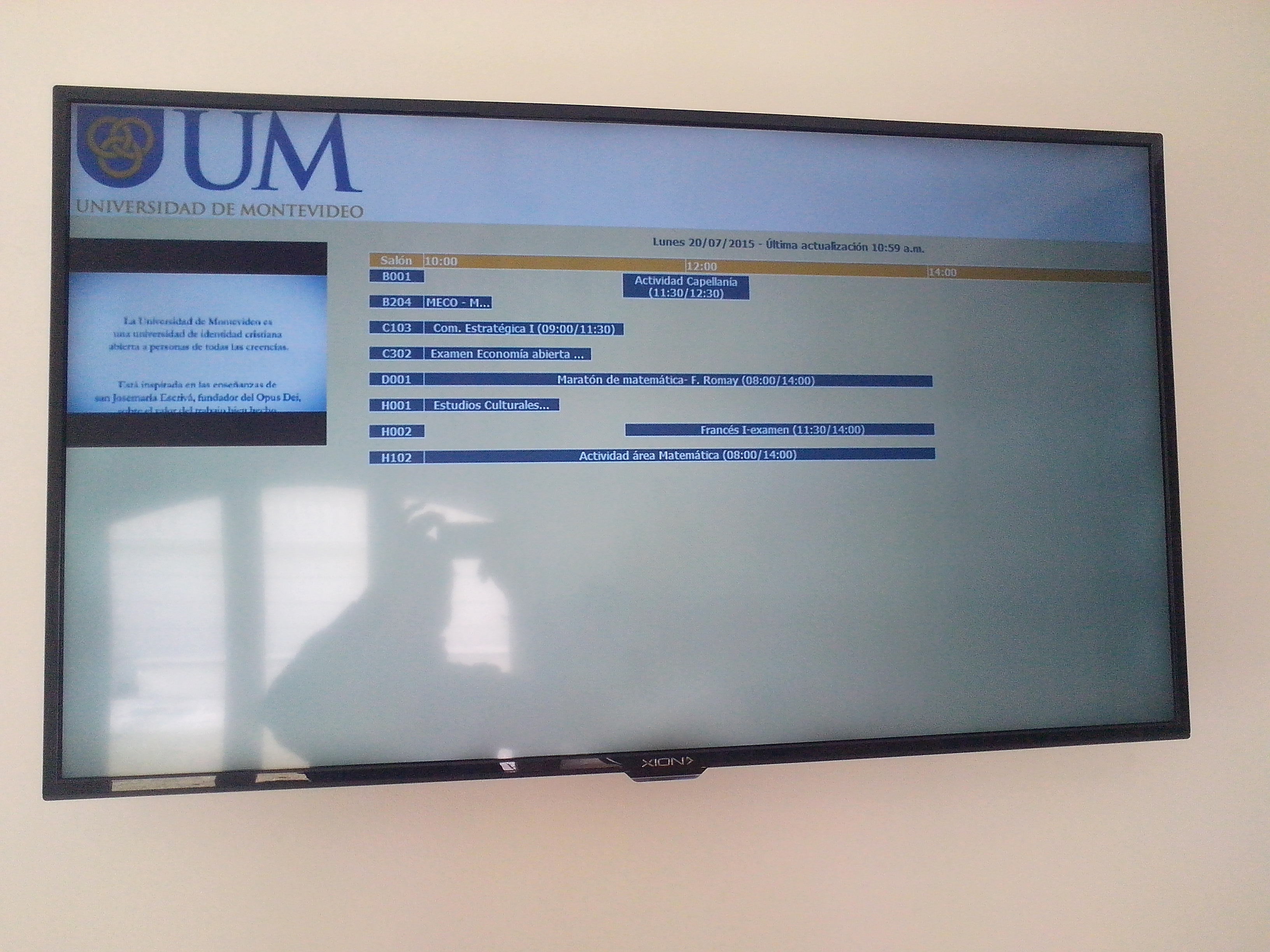 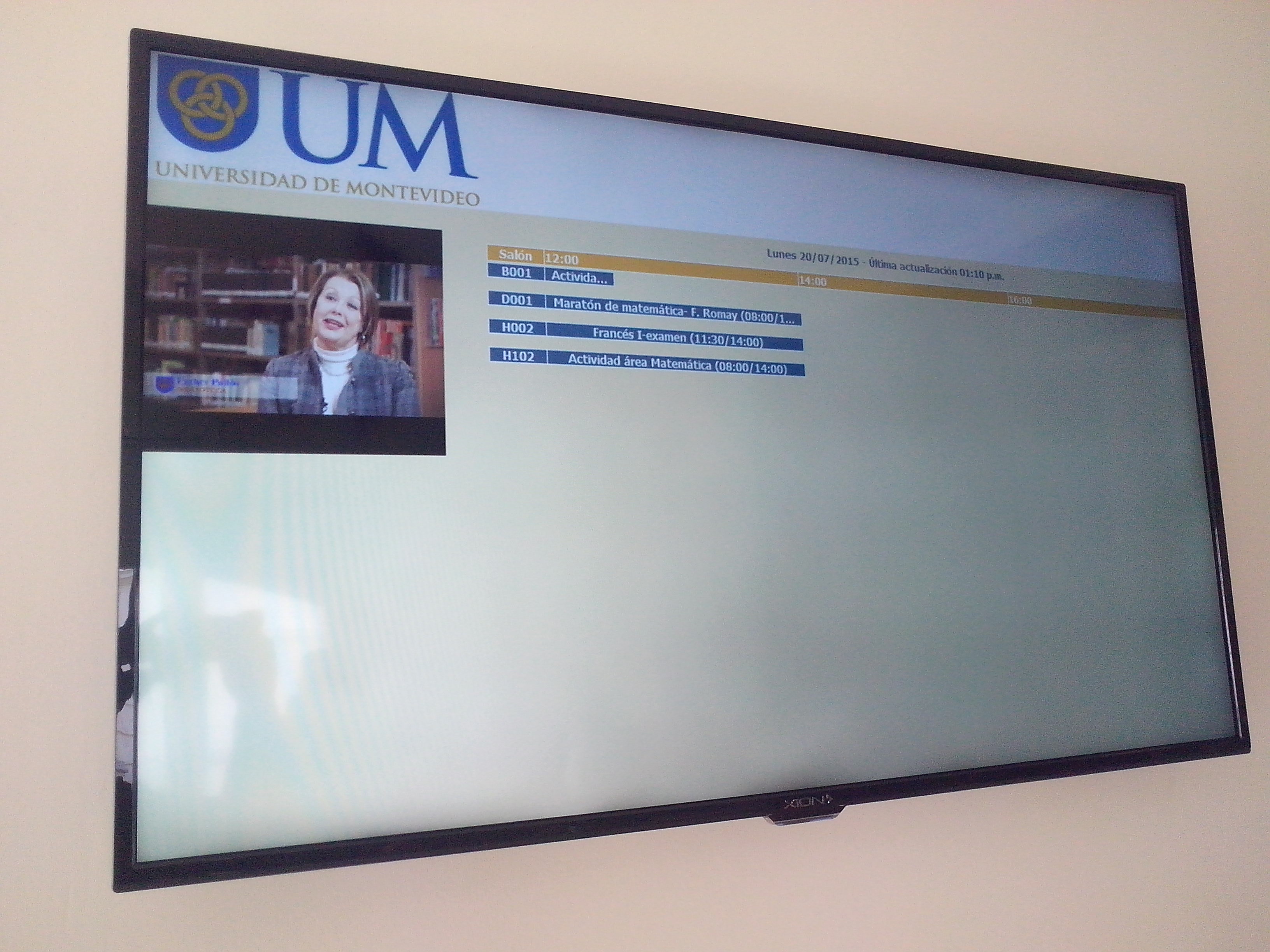