In the first part, linked below, we discovered how value mappings work with SAP PI and how to access the web services that allow you to create changelistsandvaluesmappings.

In order to connect to SAP PI and update value mappings, you need to have a user with role SAP_XI_API_DEVELOP_J2EE. In this tutorial we will use the user id inbound_bods. In our landscape, we often add the suffix corresponding to the specific PI environment. For example, in QA we have specific environments for projects, support, and performance.InDataServiceswewilltiethese system configurations which will be explained later in the tutorial.

Within the Data Services application, you can connect to other systems via Data Stores. A Data Store can represent a specific database, like Oracle or SQL Server; and application, like Success Factors; or a web service. For this tutorial we will create web service data stores to connect to SAP PI.

The screenshot below shows the two Data Stores used in this tutorial. 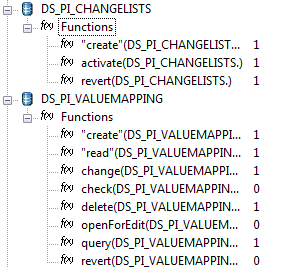 The Data Stores contain functions which correspond to the operations supported bythewsdl. You can create the Data Store by supplyingthewsdlpathfrompart 1 of the tutorial. An example is below. 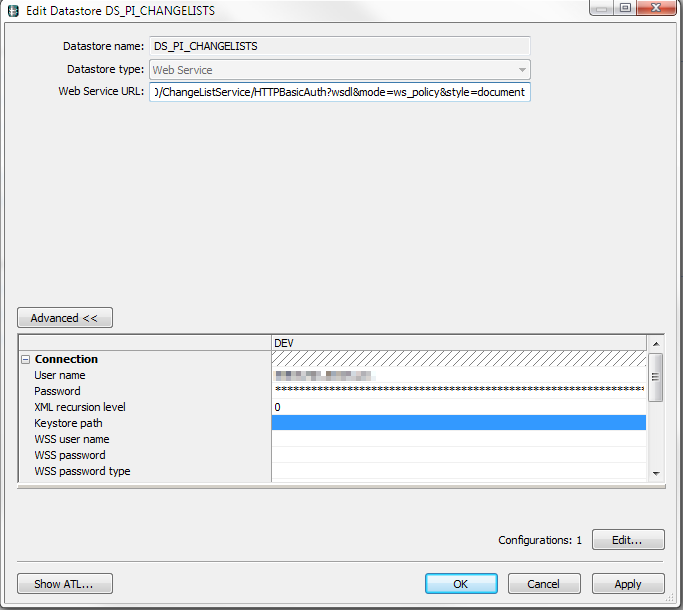 For the connection, use the User name you defined earlier. Once the connections are established, you can import the functions as you would with any other web service within Data Services.

Setting Up the Tables

Within Data Services, there are two main types of tables. Template tables can be created automatically by Data Services at run-time. They are write-once and read many. They can be used as a source, but notforalook-up. Tables must exist in the database already.Theyarewritemanyandread many. They can beusedforlook-ups. In our environment, we try to get the best of both. This means that wecanuseDataServicestocreate the table, while still writing to it many times as well as usingitforlook-ups. I first saw this approach in SAP’s Best Practices for Data Migration and have adapted it for my organization. In order to achieve this, we have created two data stores that point to the same database server and database. One is used for creating tables as template tables, namely DS_INT_TABLES_INIT, and another to have actual tables, namely DS_INT_TABLES.

In order for this to work, we create a job to create a template table in DS_INT_TABLES_INIT. Then we run the job which creates the object in the database.Finallyweimportthetable into DS_INT_TABLES. Now if the structure changes,wechangetheinitializationjob and re-import the table.

To create these tables, I have created a job, JOB_CONVERSION_SAP_PI_CREATE_TABLES. I have included the xml of the job details. You can import the job into your environment and change the details of the data store to fit your environment.

After executing the job, you will have the following tables:

Description of the Tables

This table holds the proposed values to be imported into SAP PI. In the scenario for this tutorial, we will place the customer details from our loyalty system in this table. Its structure matches, almost exactly, the structure in the above table.

This table is used to track the results of creating or activating a change list.

For this exercise, we will create a job called JOB_SAP_PI_READ_VALUEMAPPING that will call the web services to retrieve and store the current value mappings.

The Job Variables are all optional. They represent the filter criteria for the web service. If no values are passed, then all value mappings are read from SAP PI.

The data flow stores the resulting mapping ids in a template table called STG_SAP_PI_VALUE_MAPPING. The same results could have been accomplished by using the output of this call into the read web service call.

In the next part we will update the value mappings from Data Services.

(The xml file that contains the read job is split in 2. To use it, merge the two files first.)

Well explained and good documented. I'm looking forward to the next part of this great series.