As IFRS (International Financial Reporting Standards) are evolving fast, we are continuing our focus on the latest IASB’s (International Accounting Standards Board) updates. The following synthesis aims to help SAP customers and partners anticipate the potential impact of short-term IFRS evolution both on their business processes and SAP solutions for consolidation.

Since our last blog published in January 2015, the following publications have been issued by the IASB:

(*) Exposure-drafts are proposals, open to public comment. After the comment period and re-deliberations of the Board, a final standard (that may differ or not from the ED) is issued.

As shown above, the only final standard issued in H1 results from the comprehensive review of the IFRS for SMEs started in 2012.

Revised 2015 version of the IFRS for SMEs

As a reminder, the IFRS for SMEs is a stand-alone, simplified set of accounting principles for entities that do not have public accountability (meaning that neither their shares nor their debt are traded on a listed market). The first version was published in 2009. Three years later, the IASB issued a Request for Information (RFI) to seek the views of various users on whether there is a need to make any amendments to the IFRS for SMEs. Based on this feedback, the IASB issued an exposure-draft (ED) in 2013. The final text adopted in May 2015 takes into account the issues raised by the respondents to the ED.

The amendments made to the IFRS for SMEs are limited; the IASB wants to maintain stability during the early years of this standard. The most significant amendments are the following:

These amendments are effective for annual periods beginning on or after 1 January 2017. 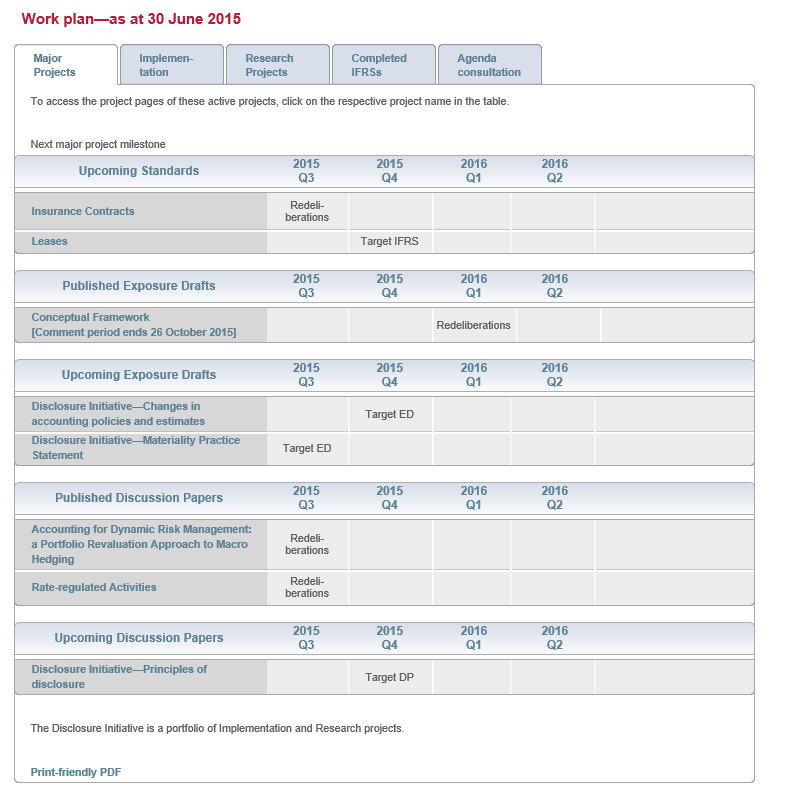 Two major, long-awaited projects are coming to an end:

Another major project named Disclosure Initiative, currently at an early stage, may bring significant changes to the presentation of financial statements and related disclosures.

In addition to these major projects, the IASB works on many other topics, which can be classified under two categories. On one hand, the “implementation” projects relate to existing standards for which amendments are needed. Some exposure-drafts are expected for Q2. On the other hand, the research program is a portfolio of projects that require further research before the IASB decides whether they should be developped into full projects. In this category, the most advanced projects relate to:

All these topics may have significant impacts on our consolidation starter kits. We will get back to these projects in our next blogs.

Thank you very much for sharing excellent information.