How to avoid Confirm Certificate Popup while accessing roles in portal

This blog post is to suggest one of the solutions to disable the  “Confirm Certificate” pop-up window which arises when the administrator tries to access the roles assigned in portal.

Consider the scenario where in the end-user(/administrator) is accessing roles assigned to their user id and a confirm certificate pop up window arises as shown below: 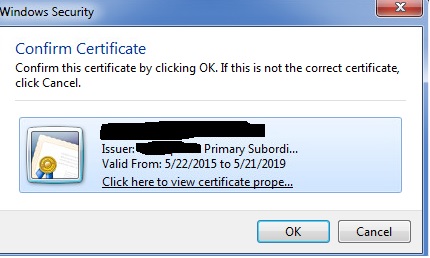 To avoid this pop up,we should set the profile parameter to the correct value in the backend systems.

For example:In case of displaying Universal Worklist in the portal,we create a role named Home.So while accessing the role “Home” ,the end user encounters the above mentioned pop up.On further probing into the issue,a profile parameter(set in the backend) based on which the pop up is shown came into picture .

In this case ,to disable the confirm certificate popup ,we have set the above mentioned profile parameter to the value , 0 ;i.e

in the backend ECC system ,so that the next time when the user accesses the portal role Home, the Confirm Certificate window does not pop up.

The parameter set would look as follows:

In a similar way , we need to set the above profile parameter for all the backend systems so that the Confirm Certificate window does not pop up.