Pitfalls I Faced While Consuming Service In SMP Integration Gateway

On a fine morning few weeks back when my manager called me up and said  ‘Hey Vishnu ,how about implementing SMP 3.0 in our network??’.Do you want to know what i was thinking ?  ‘Hell yeah!!!! this is what we call an opportunity’.

There were certain things that hold me back.

Ok,let’s say i didn’t bother about the above mentioned points,because i have already set my mind to go for it.

Gods grace server set-up was done and i would say ‘perfecto’ and there weren’t any issues.

I started of by following a document of Jitendra Kansal  SMP 3.0: An End to End guide to create an OData service for a given SAP Gateway data source

Even though the tutorial was using a SAP Delivered service,for some reason i decided to use the service that i created.This decision drove me to dig more into SMP IGW and made me hunt for answers all over google,scn and wherever i could.

After following every steps my output was so disappointing.

I didn’t understand a single word what my Browser was trying to tell me.

There were some interesting stuff i noticed while i was registering my service.Even though my service was under a NAMESPACE it wasn’t shown in the Gateway Cockpit during registration.

After getting inputs from Pavel Penaz i started troubleshooting process in IGW. 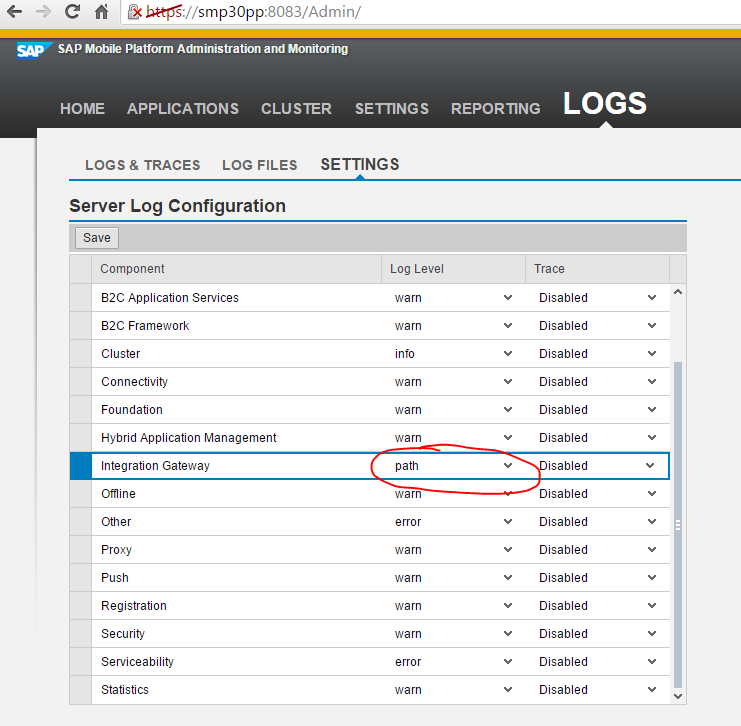 After performing the above steps i could retrieve some error in the Gateway Cockpit. ‘(Function call failed; could not find the function Z_MFW_MIGO_UI5_PO_LIST)‘.

I Dint understand why it was searching for the FM in HUB System,but before digging more into that let my explain how the systems were setup in my corporate network.

i.e we have a HUB Deployment.

At this point Bjoern Woppmann was looped into the discussion.And gave as a exhaustive explanation as below. 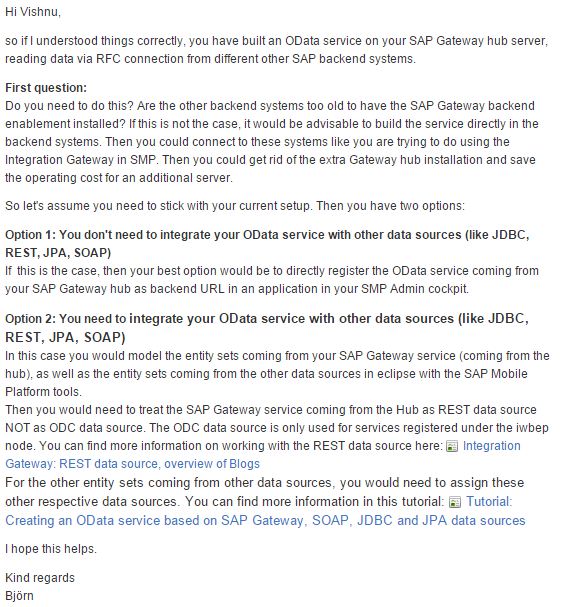 And After reading Capabilities Matrix: Which SAP product to use to expose your business data as OData service for UI consumption

All the above were based on the discussion Error while calling the entity set in SMP 3.0 SP07(via IGW) that i had in this community.I tried to consolidate it into a single blog so that anybody who is trying to step on to SMP 3.0 would feel helpfull(i guess so).

For more on Consuming service with IGW , it would be nice for every OData Developer to have an insight on Custom Coding.Carlos Roggan have a great Blog for every Beginners. Integration Gateway: REST data source, overview of Blogs

That's great that you've shared your experiences, as I'm sure it will help others having similar trouble.