SAP Data Services’ HistoryPreserving transform does a good job to reduce complexity of history preserving when loading data into a data warehouse. However, it has the limitation that ValidFrom and ValidTo columns can only be a date – not a timestamp. So to allow for history preserving of intra-day changes, we need a workaround. In this blog post I’m showing how this can be achieved by using the Map_Operation transform multiple times: 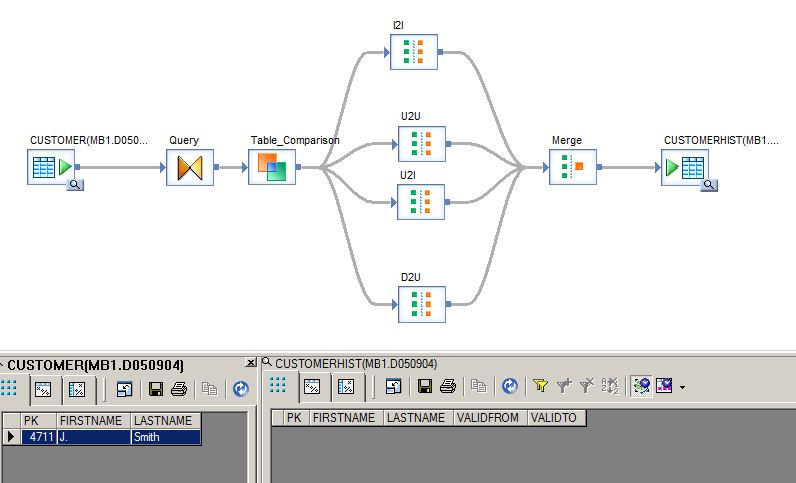 The dataflow shown above loads table CUSTOMER to table CUSTOMERHIST. CUSTOMER has 3 columns (PK INTEGER, FirstName VARCHAR(100), LastName VARCHAR(100)) with PK being the primary key. CUSTOMERHIST has two more columns ValidFrom, ValidTo both of type TIMESTAMP; Its primary key is (PK, ValidFrom). We also need to set a variable $CurDateTime at the beginning of the job to use the exact same timestamp in UPDATEs and INSERTs:

The TableComparison transform looks up incoming records in CUSTOMERHIST that have the same value in field PK and where ValidTo is null (compare to current records only). In this example we also enable “Detect deleted row(s) from comparison table”. 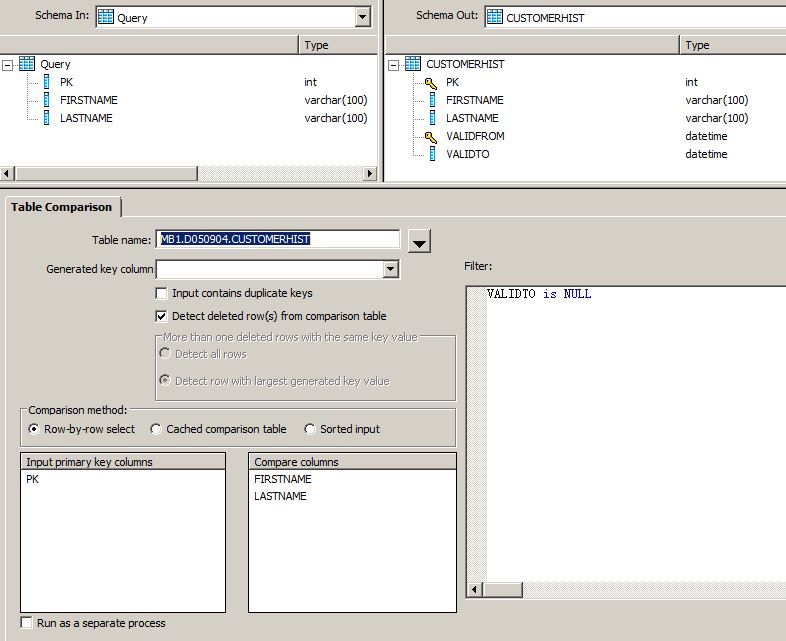 Now we set the column mapping for each case:

If TableComparision sends an INSERT, there’s not much todo. We keep the values as they are and just set the ValidFrom column to $CurDateTime

If TableComparision sends an UPDATE, the second action is to insert a new record with the current values from CUSTOMER. As I2I above, we just need to set ValidFromto $CurDateTime. Note that we need to change the update section (middle), not the insert/normal section (left).

If TableComparision sends a DELETE, we need to update the current record by setting ValidTo to $CurDateTime.

With this configuration, the four Map_Operation transforms together replace one HistoryPreserving transform. The example does not include an ISCURRENT column but it should be straight forward to do this enhancement. If there is a generated key column in CUSTOMERHIST, this could be populated using the KeyGeneration transform after merging U2I and I2I. The picture below show the status of both tables after inserting, updating deleting a record in table CUSTOMER:

History preserving after INSERT of record 4711:

History preserving after UPDATE of FirstName to ‘John’:

History preserving after UPDATE of FirstName to ‘John D.’:

History preserving after DELETE of record 4711: