This blog post is meant to introduce some new features available in 14.0 SP7, and coming up for 15.0 SP5.  Some customers have requested additional functionality to support batch insert/updates for SQL queries executed by MII. We have found multiple customer implementations that rely on inserts and updates in iterative loops, and being able to submit these queries in a batch request to the database would help performance.  Our tests have shown that this feature helps improve performance by about 30%.

This has been implemented via the addBatch/executeBatch methods of JDBC.  To utilize this feature, your JDBC driver must support these methods.  The methods were added to the Java interface in Java 5.  If the JDBC driver used does not support this, a suitable error will be displayed.

There were several additions made to help implement this: 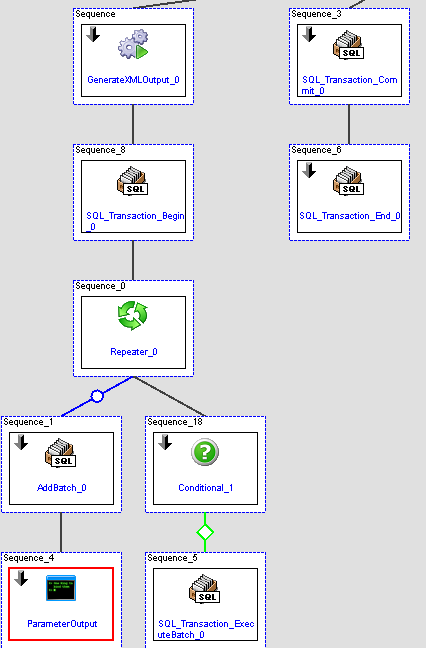 The MDO modes have the same implementation detail as AddBatch, they can be chained and added to the SQL Transaction built.

These changes were implemented as part of note 2178396, please follow this note for release details and further support information.  This note is currently released for 14.0 SP7 P0, and is being upported for 15.0 SP5, due for release in Fall 2015.

One other point, this functionality was previously available via the JTA custom actions, which were available on the SDN.  The functionality provided by those actions is similar to this collection of features, with some differences.  This functionality supports easy upgrading of existing calls to Command queries in MII transactions just by changing the mode of the query template to AddBatch and using the SQL Transaction action blocks to manage the SQL connection.  In addition, the JTA actions on the SDN are not part of core MII and are not supported by SAP.

I invite feedback on this new functionality, feel free to offer comments or suggestions below.  Thanks for reading,

I tried this feature for MDO and SQL queries and it works pretty well . One of the prerequisite to use this feature is to always use the typed parameter .

I have lot of scenarios where I have to build the SQL query dynamically . In that case its hard to use typed parameters.

It would be great if we can enhance this feature to support untyped parameter as well .

Untyped parameters are not supported.  Queries using untyped parameters have their values substituted directly in the query, rather than assigned to the prepared statement.  So in the case of batched queries, the initial compiled statement contains the values first assigned.

It may be that we need to add some validation or a better error message for using untyped parameters for this AddBatch mode.  We will address this in an upcoming patch.

is there any way to insert a NULL value for a string or Double using the Add Batch Mode .

I am getting below exception when I try yo use nullnumber function for a parameter of type Double .