How the Future of Financial Planning and Analysis should be; A European Perspective

In a recent global study conducted by CFO Research and sponsored by SAP, finance executives from Europe acknowledge increasing pressure to deliver clear, actionable business insight to their colleagues—just not as much as their peers from other regions of the world. 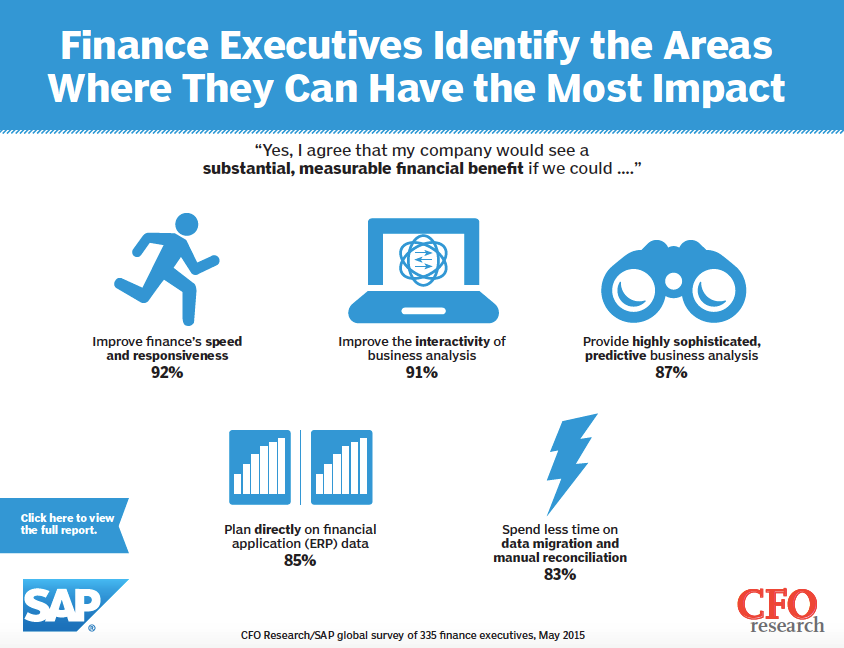 Overall, European respondents agree that the demands on them to supply highly responsive, interactive, and flexible business analysis will increase. But, compared to other regions, far fewer of the Europeans—only 13%—feel that the increase will be substantial. Similarly, just 12% of European respondents believe that the demand for ad-hoc decision support and business analysis will increase substantially over the next two years.

Yet, regardless of feeling less demand, nine out of ten respondents from Europe (90%) still say that they could provide more of a substantial, measurable benefit to their companies if they could improve the speed and responsiveness of the business analysis they supply to decision makers. And eight out of ten (79%) do agree that their companies would see a significant benefit if they could improve their ability to conduct highly sophisticated, predictive business analyses, such as scenario planning, “what-if” analysis, and risk modeling.

One area where the European respondents lag best-practice companies in other regions is in the level of integration between their IT systems for financial planning and their company’s ERP systems. Although about two-thirds (67%) of the European respondents acknowledge that their systems are “fairly well” integrated, compared to other regions Europe has the fewest respondents—just 6%—who characterize their systems as “very tightly” integrated.

The result? Only a fifth (22%) of European finance executives in the survey believe that their IT systems for financial planning currently can make a substantial contribution to finance’s ability to support decision making, lagging every other region in this regard. If their ambition is to move up to the first tier of performance and responsiveness, European finance executives would do well to pay close attention to this threatening technology gap. In May 2015, CFO Research, in collaboration with SAP, conducted a global survey of senior finance executives to gain a better understanding of how leading-edge financial planning and business analysis capabilities can support effective decision making. We collected 335 responses from large companies with at least US$500 million in revenues, representing a broad range of industries. We received 20% of our total responses from North America (U.S. and Canada), 25% from Latin America (Mexico, Central America, and South America), 24% from the Asia/Pacific region (including India and Australia), and 30% from Europe.