This is a completely new version of SAP Screen Personas, rewritten from the ground up in HTML5 as part of the SAP GUI for HTML (Web GUI). The fundamental value of the product remains the same – to allow your employees to be more productive in their roles with personalized and simplified SAP GUI screens. By becoming an integrated part of Web GUI, the product gains several advantages:

In addition, we added two major enhancements, both of which were requested by customers of earlier versions of SAP Screen Personas.

Let’s examine each of these in more detail, followed by a success story from one of our ramp-up customers, and some possible next steps that you can take.

With SAP Screen Personas 3.0, we changed the architecture, moving more of the processing into the ERP server away from the browser (see diagram below). The impact of having all the screen calculations done on the server is that any rendering engine has access to this information. So, any screens you edit in Web GUI (where we have built the editor using SAP UI5 libraries) can eventually be rendered in any of the members of the SAP GUI family – SAP GUI for Windows (SAP GUI), SAP GUI for HTML (Web GUI), SAP GUI for Java (Java GUI).

For now, the rendering works best in Web GUI, with the other GUIs lagging by several months. So, our recommendation is to focus on the SAP GUI for HTML for most of your scenarios and use SAP GUI only for testing. If you want to know whether a specific screen will work in SAP GUI, read our SAP GUI for Windows supported features note, or just try it. We are working on getting the functionality in SAP GUI for Windows / Java as close as possible to SAP GUI for HTML, but that there will always be limitations as there are some differences in the underlying technologies. For example, SAP GUI does not understand Web-based standards such as cascading style sheets (CSS). We are continuing to work closely with the GUI teams to provide consistent performance with personalized screens across all types of controls. 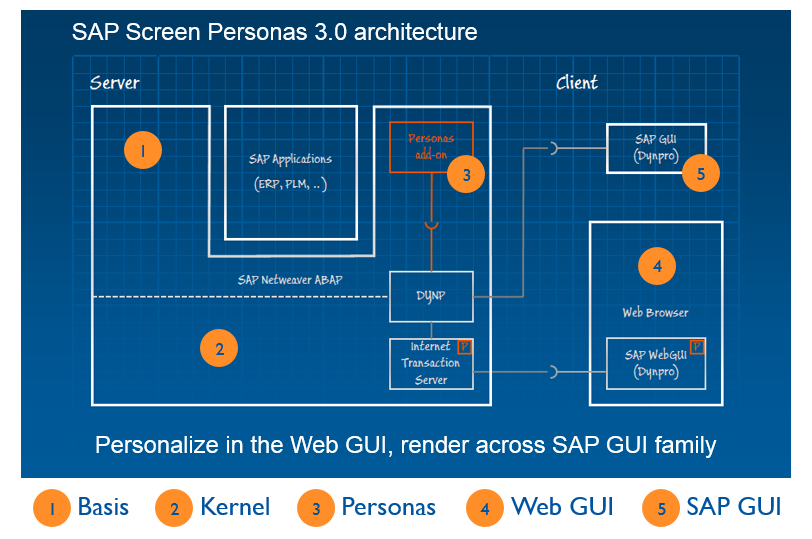 Since SAP Screen Personas is now part of Web GUI, you can use the existing roles and authorizations that you have defined in SAP. Once you build a flavor for a specific user or job function, you can just assign it to a role that already exists in your system. You no longer need to maintain a parallel set of groups just for SAP Screen Personas and synchronize them with your main SAP roles. Although we have automated the synchronization process in SAP Screen Personas 2.0 SP3, SAP Screen Personas 3.0 removes this one additional step, simplifying deployment in large environments.

We often received customer inquiries about whether SAP Screen Personas 2.0 could integrate with NWBC, SAP Portal, or the Fiori Launchpad. (The answer is yes to all.) While the process was generally very straight forward, now it is even easier. You just follow the existing process for integrating Web GUI into one of these shells; there is no special process for SAP Screen Personas now.

This one is pretty self-explanatory. Although Microsoft announced that it will support Silverlight through 2021, we are already seeing backing from other vendors starting to decline. Recent versions of Google Chrome no longer support the Silverlight plug-in.

More powerful scripting, based on JavaScript

The new scripting engine is based on JavaScript and now includes looping, nested IF conditions, and logging capabilities. For simplicity, we are keeping the record and playback capabilities, but now this generates the JavaScript you need. We now maintain scripts independently of the buttons, so it will become much easier to reuse scripts within a screen. Feedback from ramp-up customers was very positive about the new scripting. I have already blogged about how to get started with JavaScript:

In earlier versions of SAP Screen Personas, we learned that, in many cases, designers are building screens or at least creating templates that business analysts will later modify. The designers had specific requests for SAP Screen Personas to include some of the functionality they typically found in their design tools. So, we added new features such as the ability to clone controls, line up buttons, and select colors from a pre-defined corporate palette.

We also added a global theming editor to make it easier to create a design once and reuse on multiple flavors or transactions. With a Fiori theme (part of our Rapid Deployment Solution for SAP Screen Personas 3.0), you can provide a Fiori design to all your SAP GUI transactions at once.

Hunter Douglas, a global manufacturer of premium window coverings, was part of the SAP Screen Personas 3.0 ramp-up program. They used SAP Screen Personas 3. 0 to simplify their Remake Orders Process and streamline transactions SMEN and VA01. Previously, their customer service representatives (CSRs) used a “swivel chair” process, which was cumbersome and time consuming. They had several paths that the CSRs would take through the system. They created different flavors for each scenario.

For their project, they used around 45 scripts to power the simplified screens. The scripts move information between screens, bring up color charts on the screen, and selectively hide information based on context. People access the streamlined transactions through an intuitive launch pad.

They started their simplification process in mid-January and went live in mid-May. The team consisted of a business analyst, architect, project manager, JavaScript developer, user experience designer, and basis expert. The Hunter Douglas customer service representatives were also involved in the project, as they are the ultimate users of SAP, entering transactions while they are on the phone with customers.

You can learn more details about their deployment and the business impact at SAP TechEd in the fall.

Of course, the business value of SAP Screen Personas remains the same.

Learn more from our knowledge base.

As you can see in the architecture diagram above, SAP Screen Personas works with several other components, especially the kernel, to deliver productivity through personalization. So, it is very important to remain on a recent version. The minimum Kernel Patch required for SAP Screen Personas 3.0 SP1 is SAP kernel 7.42 patch level 200

Read about the minimum system requirements to use SAP Screen Personas 3.0 SP1.

Read the main SAP Screen Personas 3.0 SP1 Note that covers all relevant notes for the product.

Migrating to SAP Screen Personas 3.0 from 2.0

We have built a migration utility into SAP Screen Personas 3.0. Watch this video to see how easy it is to migrate your flavors.

Want to hear how other customers are using SAP Screen Personas to make their users more productive? We have two monthly (virtual) meeting in which companies share their best practices and take questions from the attendees. Usually, there is a customer demo and/or a tutorial from an SAP product expert.

SAP Screen Personas 2.0 Practitioner Forum is on the 2nd Wednesday of each month.

SAP Screen Personas 3.0 Practitioner Forum is on the 3rd Wednesday of each month.

Learn how to register for the Practitioner Forum.