The process is described in following picture:

A request is sent to SMP, e.g. a GET Request to receive some data from backend system

SMP will forward the data response to the mobile device.

In the following I will described the process for Principal Propagation in combination with a SAP Gateway.

Make sure that SSL is enabled on the Gateway server. Steps for this are described for example in following post:
Enabling SSL (HTTPS) on SAP Gateway .

Also test before if your Gateway system is prepared for certificate based authentication. Required steps are described here:

Values can be found inside the client certificate that is used by SMP to establish a mutual https channel to Gateway.

Tip: I recommend checking the exact values inside dev_icm log, because the string has to match exactly the sender, so e.g. if a space is missing it is not working. Simply execute it once, and check with ICM Trace set to 2. (see Debugging section)

For testing scenarios you can also use smp’s base certificate: smp_crt
It is also tagged as CA certificate. You could use it for both (smp client as well as principal propagation CA). 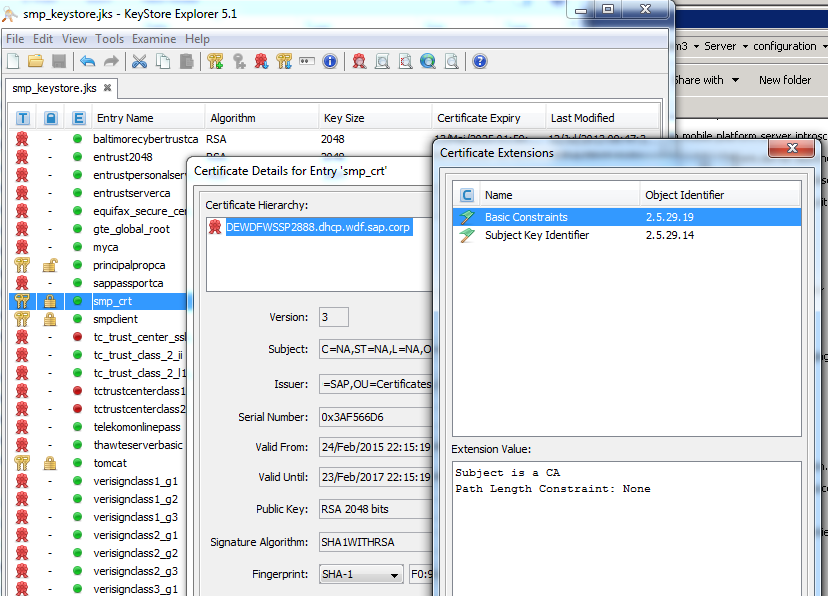 But this should be only used for testing/development purpose…

Create a new app which points e.g. to an odata service from netweaver gateway. Choose as SSO mechanism “X.509”. Additionally you have to set the “Certificate alias”. Here you have to specify the alias name of the key pair which will be used to establish the mutual authentication channel between SMP and backend.

Add a new security profile. Inside the Security Provider use an authentication provider to authenticate the user (in my case SAML2), then add Principal Propagation module as second provider 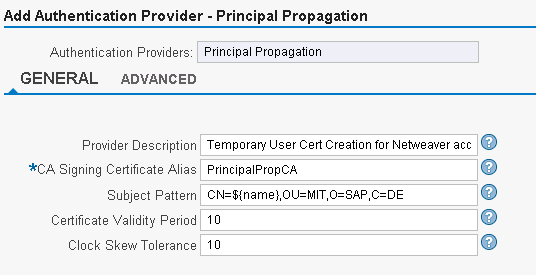 The Subject Pattern of the user certificate can be chosen. ${name} is the variable which gets replaced during runtime with the current authenticated username. This user certificate will be valid for 10 minutes only. It will be signed by PrincipalPropCA (which is a CA certificate pair that we imported into SMP’s keystore.

Especially if communication between SMP and Gateway is not working, it makes sense to have a closer look on what exactly has been received on Netweaver side. For that you can increase the log level of ICM and then use the dev_icm log to check what has been received.

After that execute a failing request, then check ICM Trace File:

E.g. the following error is thrown, if SMP is not setup correctly as trusted system on SAP gateway: Intermediary is NOT trusted / Reject untrusted forwarded certificate

So you can see here, that the DN of SMP’s client certificate is not exactly the same as that one we are trusting (missing spaces…). So we need to correct this in transaction RZ10:

Thanks Marvin for the wonderful blog. Liked the way you covered the required steps with explanation of concepts/reasons behind them. In my case I wanted SAML-SSO to our custom web app written in Java instead of to SAP Gateway. I was able to do that after getting generic idea from this blog and from your other blog regarding SAML auth in SMP.
http://scn.sap.com/community/developer-center/mobility-platform/blog#samlflow

Q1: Why is Principal Propagation called an authentication provider when it does not do authentication?
Q2: After SMP does SAML authentication, is principal propagation only possible by sending X509 cert? Can't SMP send a predefined header with username to backend? In cases like mine, in backed app I am only concerned about username of the authenticated user.

thanks, in regards to your questions

Like mentioned it should be also possible to use SSO2 or Kerberos (did not try it myself yet). Simply forwarding the username will be difficult. But what you could do, you could use the "Populate JAAS Subject From Client Provider" Authentication Provider, which is also not authenticating the user, but you can use this to read out header or cookies from the authenticating request and store them as variables inside the server. Inside the sso backend configuration you could attach them again as header or cookie... If I find some time I will try to write a blog post for this...

This is a really helpful blog,Thanks for sharing !! 🙂

Can you light up the path to solution for my query:

current we are implementing SMP platform Native mobile app. I required your advise and suggestions for below scenario :

1) Our mobile app will authenticate through windows AD server. (user maintained / created as "MobileUser1" in AD and ECC server) *User id is same in both the servers

2) Is it mandatory to maintain the same user "MobileUser1"  in (NW server) ? to access for creating the orders, pull / sync the data

3) If we maintain "Mobileuser1" in NW server then how can we handle if AD user password changes then it's mandatory to change and create the same password in NW & ECC??

In your case you need the same user in AD, Gateway and your backend system. This blog post is about principal propagation, that means that SMP will create a temporary user certificate and will use this user certificate (instead of user/pw) to authenticate the user at Gateway. Thus if AD password changes there is no need to change the user's password on Gateway or backend system, because the user's password is never used in this scenario. Beside Principal Propagation you could also use SAPSSO2 Generator. With SAP Logon Tickets there will be also no need for a maintained user password in Gateway/backend, see SMP 3 Security - SAPSSO2

We are trying with above your solution for our AD integration with SMP mobile app,

Please help me in step 2, 3, 4 under preparation

from where we can generate the user certificate for SMP?

You can create it by your own e.g. by using OpenSSL. For testing purpose you could also re-use the existing smp_crt keypair which is already available inside the SMP keystore...

I described that as well above...

For testing scenarios you can also use smp’s base certificate: smp_crt

It is also tagged as CA certificate. You could use it for both (smp client as well as principal propagation CA)...